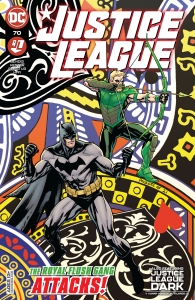 Justice League #70: Place your bets, folks! The Royal Flush Gang is back and ready to take down the Justice League! Find out their connection to Deathstroke and their growing plot to destroy Green Arrow and Batman.

Meanwhile, a villain from the Dark Multiverse has returned and he’s about to turn the Justice League Dark’s world upside down! Could this be the end of their team and Atlantis?

That’s not to say that Bendis’ story is all bad. Bendis sometimes has some very good story ideas, but he often stumbles in the execution. This is the case here. I love that he pits the team against the Royal Flush Gang. Most incarnations of the League have faced the Royal Flush Gang at some point.

I also like the nods to Superman history when Superman is asked about what is contained in the Fortress of Solitude. We are shown some of the items, many of which hearken back to the Bronze and Silver Age Superman stories: a red sun chamber, a giant steel diary, a Legion flight ring, and even the Titanic. It’s interesting that the flight ring appears to be Clark’s, not Jon’s. And for some reason, it has the old Legion symbol on it, not the Bendis Legion version. Is this an artistic error? Or are Clark’s adventures with the pre-Bendis Legion canon again somehow?

And the classic giant golden key to the Fortress makes an appearance too. Phil Hester and Eric Gapstur recreated it beautifully. It looks just like it did in the comics I read as a kid in the 70s and 80s. In general, the artwork is fantastic in both stories. Kumar’s work on the Justice League Dark backup is as impressive as Hester and Gapstur’s work on the main story.

In most of the preceding issues, Bendis has had a tendency to put Naomi at the forefront of every issue. It almost seemed like the League was guest-starring in a Naomi title. But Bendis seems to have found a proper balance. Naomi is present in this adventure, but Bendis doesn’t have her overshadowing the rest of the team.

In the backup story, the battle against Merlin reaches a conclusion -for now.  Having summoned and recruited Arion, Merlin retreats However, Zatanna is overcome by the power of the Upside-Down Man. John impersonates her father Zatara in hopes of bringing her to her senses. But Wonder Woman arrives just in time to bring Zatanna back to sanity.

The only negative I have for Ram V’s backup story is that DC published it out of order with the Justice League Dark 2021 Annual. While it’s not difficult to understand what’s going on, it’s probably better to read the annual after this story. But many readers will have already read it out of order. Ultimately this isn’t a big gripe, as most readers should be able to figure out what’s going on. If not, then just re-read the annual after this issue.

One of the major issues with Bendis’ Justice League run is that he seems preoccupied with rehashing old storylines from his other books he’s written for DC. For some reason, he has to tie the Royal Flush Gang to Leviathan by having them meet with Mark Shaw in a flashback. I can’t see that the connection to Leviathan adds anything to the story. Instead, it seems rather pointless. 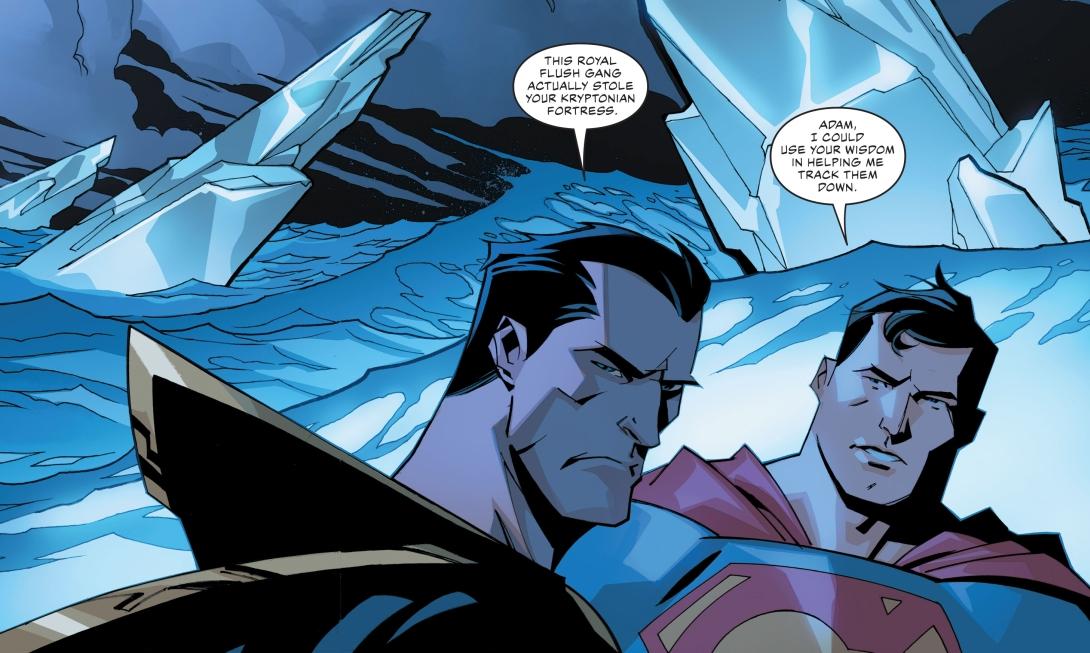 And Checkmate doesn’t seem to be contributing much to the story either. They just seem to be there just to remind us that Bendis also wrote Checkmate. Does Bendis get royalty payments each time Leviathan or Checkmate appear in a comic?

Bendis needs to stop revisiting old storylines and put more focus on moving the League forward. At least bringing in the Royal Flush Gang is something new. So, I guess that’s some improvement, but he needs to let his defunct titles go and concentrate on the Justice League.

The main story in Justice League #70 is a step up from  Bendis’ previous issues, but there’s still a fair bit of room for improvement. While he has done some excellent writing in the past, his Justice League hasn’t lived up to its potential. Perhaps it’s better that he’s moving on after issue #74. On the other hand, I’m glad to hear that Ram V’s Justice League Dark is graduating to its own title soon. His story more than deserves it. I would give Bendis’ writing a mediocre 3 out of 5, but Ram V’s writing and the fantastic artwork in both stories raise the rating.