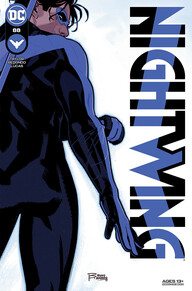 “I thought Haley would be more sensible” – Dick Grayson

“Nope…too stubborn.  And too loyal for her own good.  Just like her owner!” – Barbara Gordon

Nightwing #88 – The blue stripes are back! Nightwing gets an updated suit starting this issue!

After the distressing events of rescuing Haley from getting dognapped by bad guys, Nightwing discovers there are way more hits on Dick Grayson than he realized – thanks to going public about his fortune.  He needs to find a clever way to be Dick Grayson and Nightwing at the same time.

Heartless tries to buy power away from Blockbuster in order to take control of Blüdhaven, and both of these big bads have Nightwing in their crosshairs. 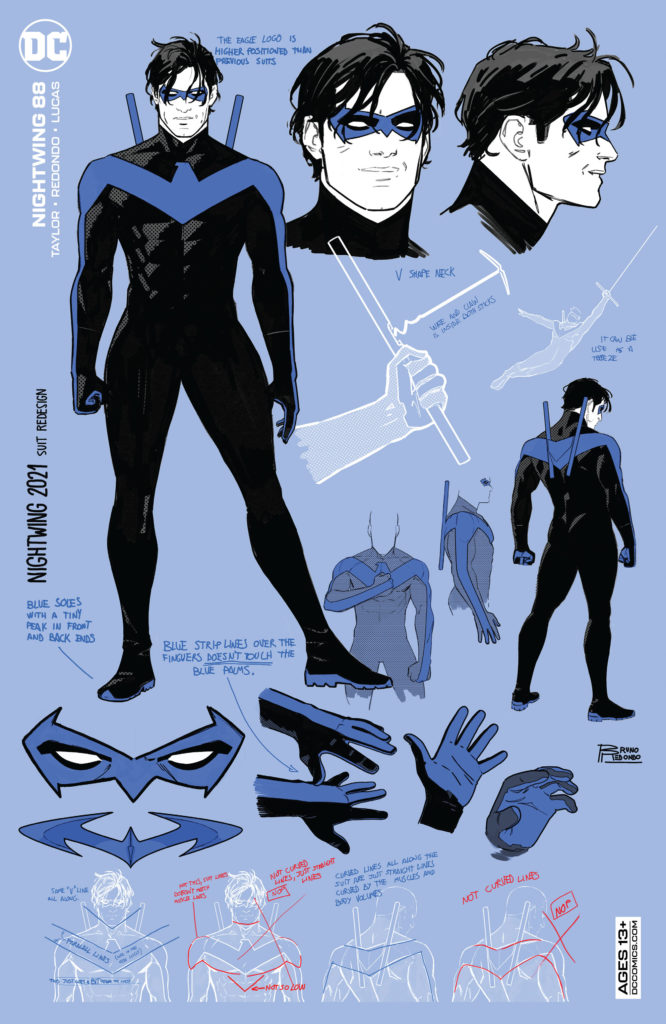 Tom Taylor “gets” relationships.  If you read any of his other material right now ranging from Superman to Dark Ages, the man obviously gets the relationship of family…. friends…pets…and budding romances.  This book continues to get better and better.

If you followed Dick in the Joker War, and all that happened to Dick Grayson (Ric???) and having a bullet to the head, your heart literally is beating out of your chest  when you see the frame where Dick is in the crosshairs.

Speaking of framing, Bruno Redondo, Adriano Lucas, and AndWorld Designs make you want to drink in each frame.  Sometimes I am speechless about how Redondo makes Taylor’s scripts come alive.  They are a pair of gloves, peanut butter and Jelly, Batman and Robin…uh wait.

Literally, the green light that emits from the screen to paint Babs totally green…yeah we know she is Oracle, but it’s a great touch.  What is Haley doing in a frame..smiling, wagging her tail, slobbering with her tongue out.  She may not be central to the picture, but you look for her because of the art! 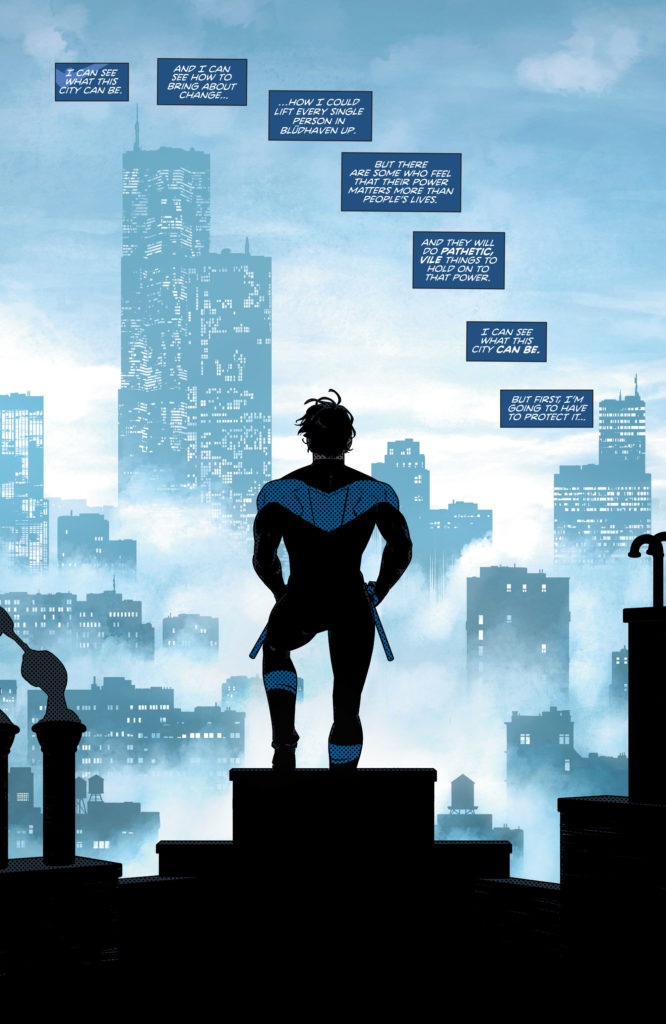 Spoiler Alert – The TITANS never ever ever have looked so good!  This is how a comic needs to make you feel!  Taylor’s writing is optimistic and we don’t want the rug to be pulled out from us.  Dick is no longer under Bruce and there is no darkness….Babs and Dick and Haley (Bitewing) are optimism personified.  Let the other comics deal with the bad stuff.

Allow Dick to continue to get to know his sister.  Let Dick and Babs continue their journey.  Above all, let’s watch Dick build BludHaven into a city that rivals the optimism of Metropolis or even brighter.

A new suit!  Mr Terrifice is the man!  I love how Taylor weaves more characters, more tapestry into this book.  Guest appearances are strong in this issue, and it is not gratuitous appearances.  It really contributes to the story! 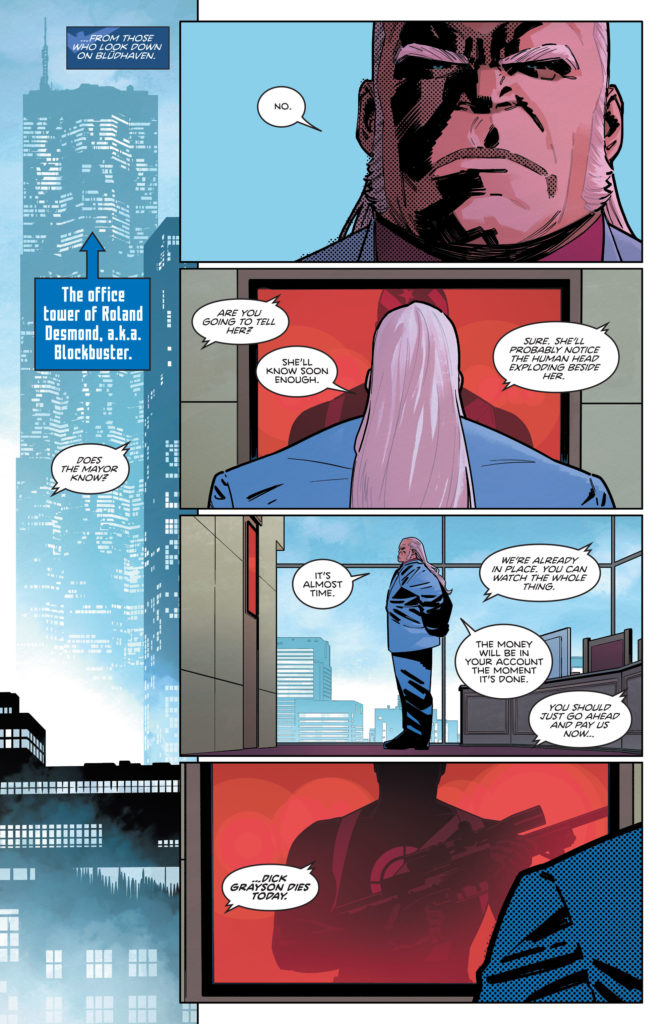 None… Taylor put Haley in danger last issue and did the same with Dick this issue.  It comes with the territory that these are heroes in danger all the time.  The events of Joker War have left the Bat Family in somewhat a disarray…Bruce without his billions, Alfred’s demise….But Dick and Barbara.  This is where readers have their light…their hope!  Keep lighting that candle Taylor and Redondo.  We need this! 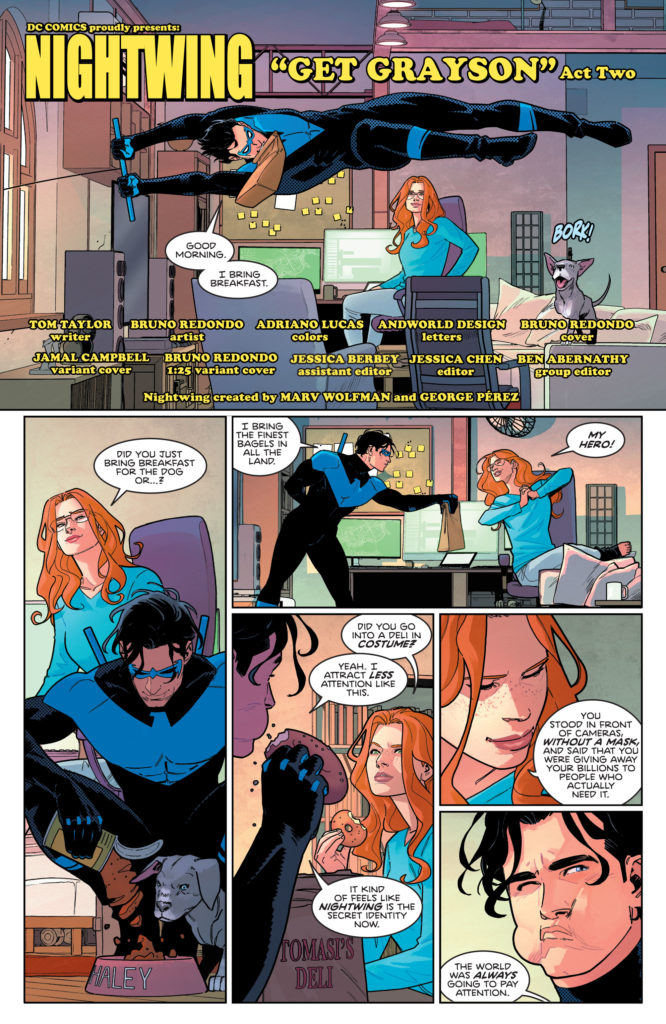 All Nightwing fans are on this ride.  You should be too!  Buy this book and collect the back issues as well.  Issue #87 was a work of art! Nightwing #88 is a work from the heart!  The alternate cover says it all!  This is THE BEST COMIC on the market today!