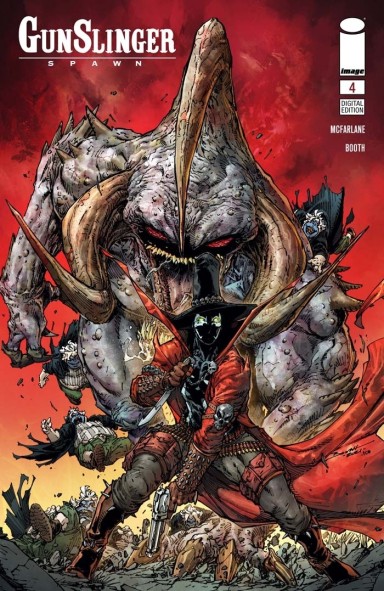 “I said…I’ll take my hat!” – Gunslinger Spawn to The Clown Gunslinger

Spawn #4- After a vicious battle with Dakota and her “pets”, Gunslinger finds himself face to face with an upgraded Clown. Malebolgia now possesses the power to be both The Clown and The Violator.  It’s two demons in one and it’s not happy with Dakota nor Gunslinger Spawn.  But as always, The Clown has a deal to make. 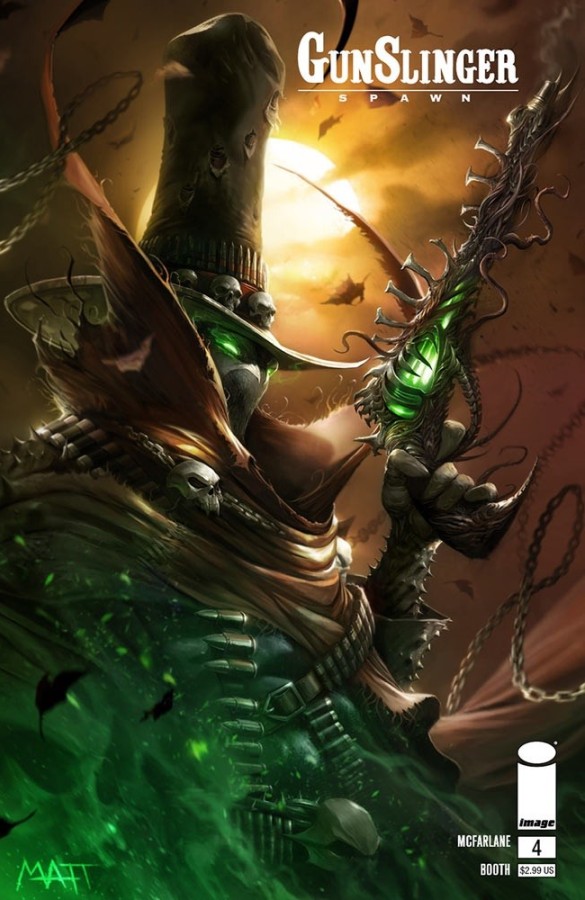 What’s not to love as The Clown/The Violator is back and surprisingly it is not within the pages of Spawn, but in the pages of Gunslinger Spawn. Todd McFarlane is quite the chef as he knew that his readers wanted these two characters together…a weakened Gunslinger and a more powerful than ever Violator.   Both McFarlane and Brett Booth are on the same page as there is nothing that motivates a Spawn who has made a deal with the Devil than …another deal. The Clown knows the buttons to push and Javi/Gunslinger has a past that includes a beautiful woman (insert your Wanda/Al Simmons comparisons here dear readers!)  McFarlane goes backwards to go three steps forward. Not only do we get to see Dakota and Clown go at it, but also see the new improved Violator (spoiler alert) take Javi to the woodshed (physically and metaphorically speaking). 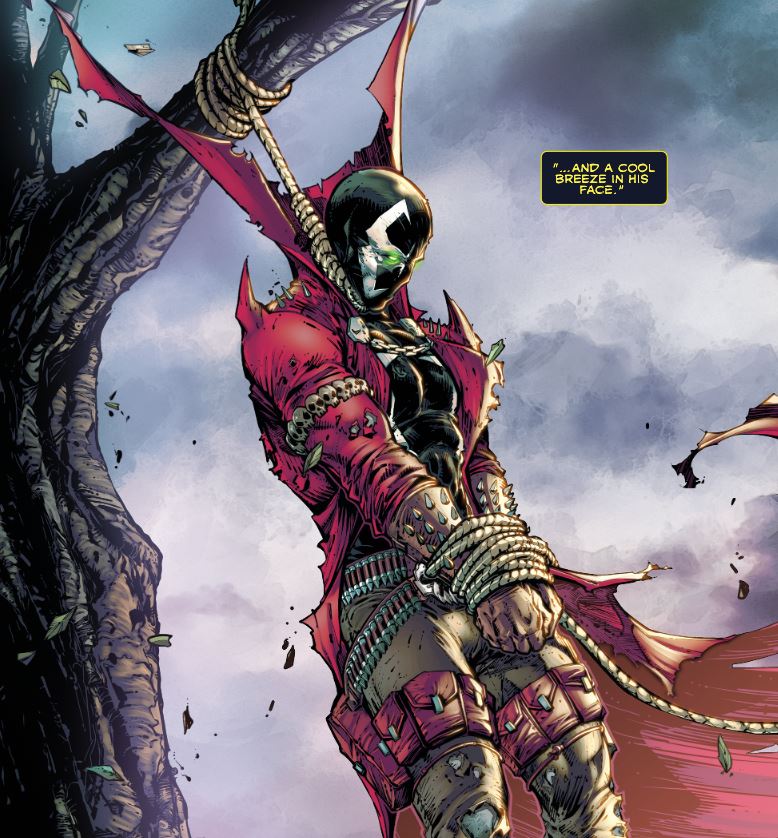 McFarlane and Booth have invested new blood into these Spawn titles, but none is so apparent than in Gunslinger Spawn.  McFarlane’s writing along with the art team led by Booth in this title has the glamour and the instant soundtrack that automatically plays in your head when you see any frame with Javi in it. Javi has a history and McFarlane is dripping it out courtesy the images that Booth provides! As The Clown indicates…Like it or not, we’re stuck with each other!”.  Let’s hope that is the case with Booth and McFarlane for this book. Booth slays each page with intricacies and beauty the way that McFarlane did in the early days with Spiderman and Spawn.  Great stuff! 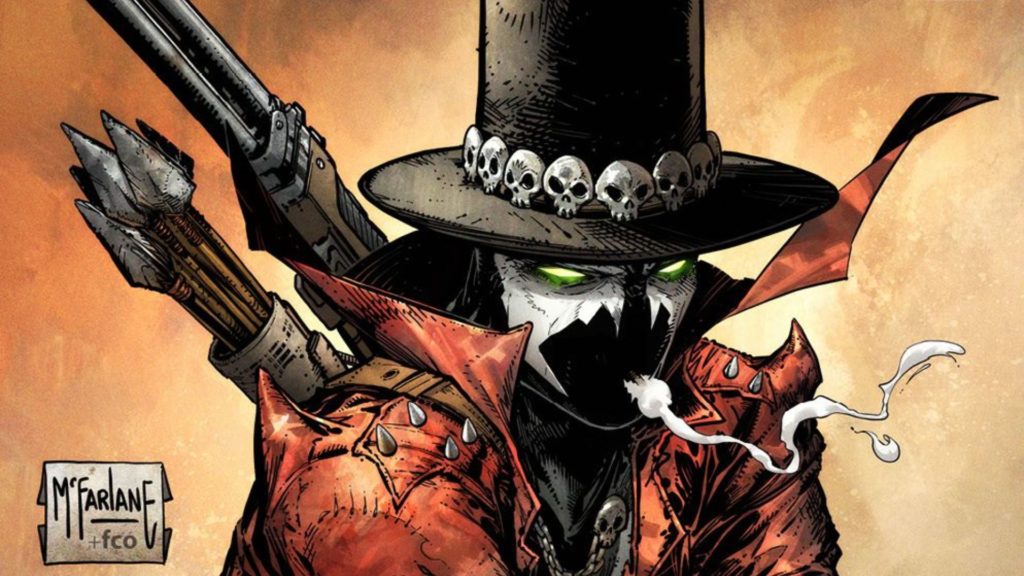 Rinse, Wash and Repeat… good for Shampoo, but let’s not get ahead of ourselves.  Where have we seen this image before? 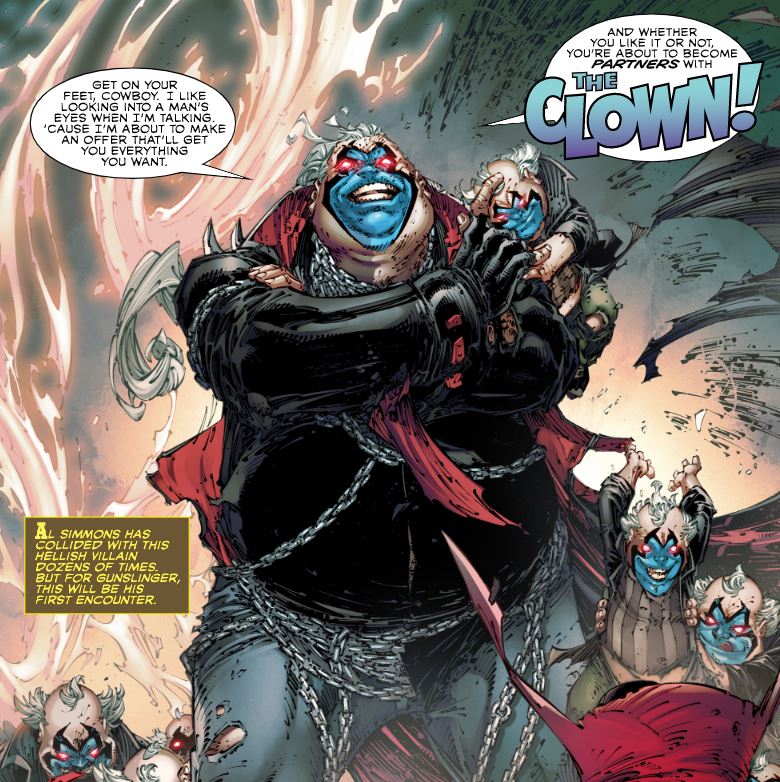 Booth paints an interesting picture here with a villain surrounded by Minions on chains…. also, see below where Greg Capullo (another Spawn artist) crafts a pretty interesting Batman Who Laughs surrounded by his Minion Robins. However, we could say Batman Who Laughs has some pretty interesting chain adornments that are arguably Spawn inspired.  We do see things go back and forth a bit in terms of character development.  However, we just out of that landscape with Greg Capullo and to pull that into one of the Spawn books ….well, you be the judge.  Is it copycatting or is it an homage?  You decide! 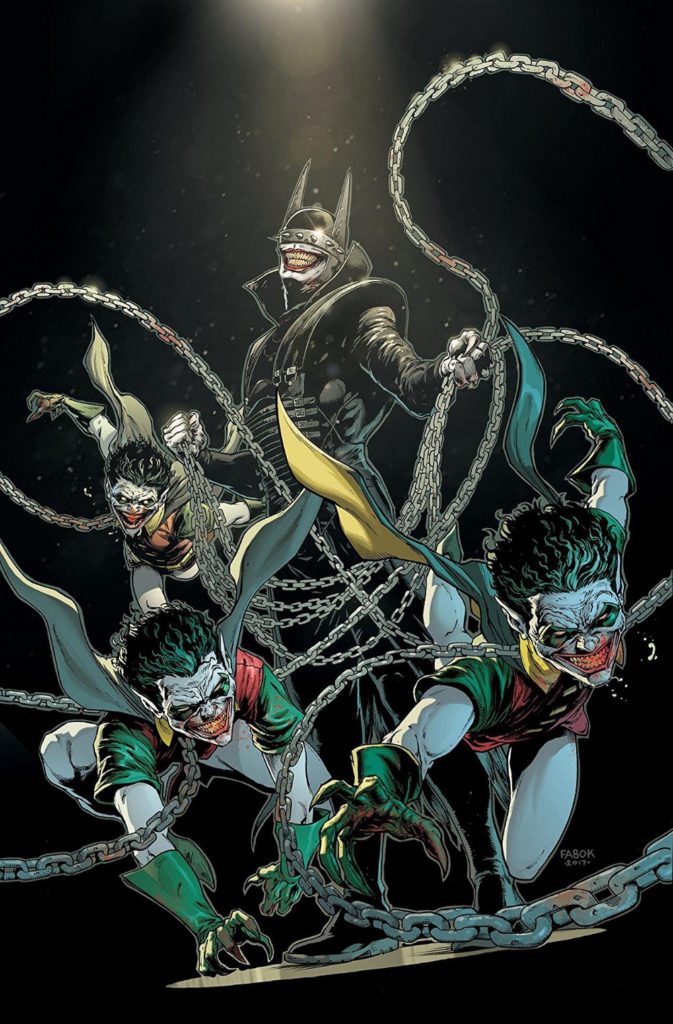 Issue #4 brings back one of the best Spawn villains of all time and we get to see him back to his old tricks with a new look.  Did I enjoy it?  Yes!  Can I see some homage?  Yes.  Or maybe, villainy simply comes adorned with chains and minuscule clowns?  At any rate, Gunslinger Spawn continues to impress and it is clear McFarlane is having more fun in this book than in his other titles.  Pick up the previous issues as you will be glad you did!