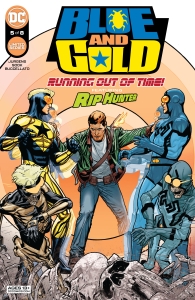 Blue & Gold #5: Blue and Gold Restoration is open for business! The only issue is, our duo is falling apart while their waiting room is packed to the brim with mostly illegitimate problems. Now Omnizon, self-appointed ruler of Earth, is here to sentence Booster and Beetle to death for disobeying her royal rule of the land. It’ll take a friend from the future to save their present and prevent a PR nightmare that could close their operation for good!

In Blue & Gold #5, Rip Hunter, the Time Hunter returns to help out Beetle and Booster. Booster has a lengthy history with Rip. Booster has a secret job, working for Rip as a protector of the timestream. Also, unknown to Booster, Rip is his future son.

We first see Rip in 1962, catching a performance by the Beatles in the Cavern Club. I have to admit that if I had the ability to time travel, that I would probably do the same. Unfortunately, Rip has to leave early to help Beetle and Booster. However, I can’t help wondering why he has to leave early. If he has a time machine, couldn’t he stay for the whole show? Why would he have to hurry when he has a time machine.

Meanwhile, in the present, the two heroes find their new superhero business has attracted more customers than they thought. And many of them appear to be delusional or timewasters. But Booster points out, “I’m from the future. Until recently, you were flying around in a giant, mechanical bug. Our own stories are as crazy as theirs”. Beetle agrees that perhaps it’s wiser to give each potential client a fair hearing, regardless of how outlandish their story might seem. 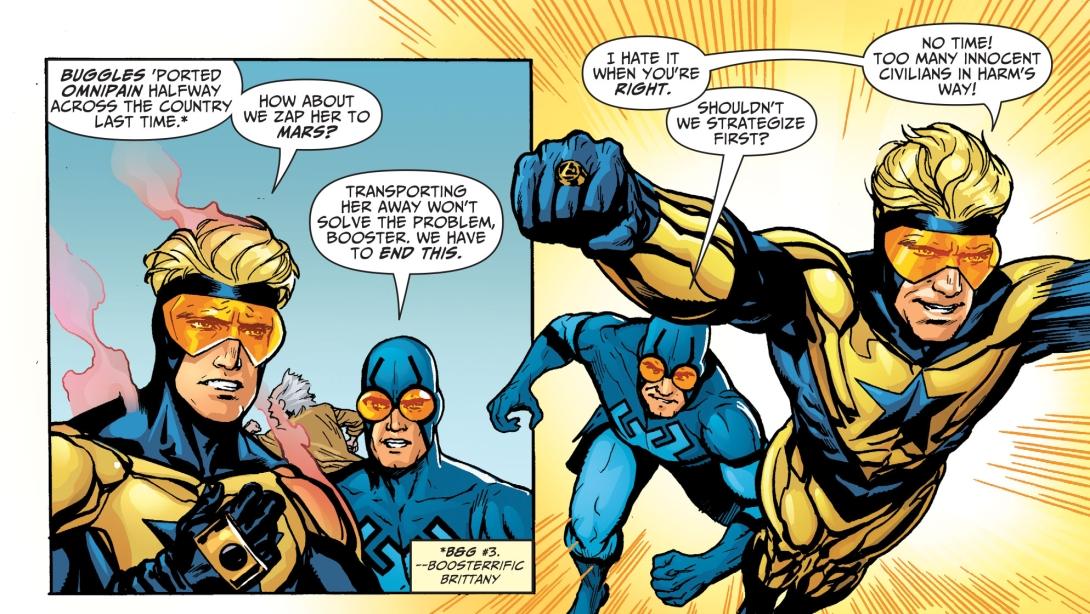 However, before they can get started, Omnizon reappears to resume hostilities against the heroes. Despite Rip’s timely intervention, Omnizon abducts Beetle and Booster, taking them to face her father, Lord Kif’n. The alien ruler explains that he rightfully rules Earth, as his ancestors claimed it 70 millennia previously before sentencing them to death by combat.

Alongside Jurgens’ story, we have seen social media posts from various people commenting on Beetle and Booster’s adventures. Two of them are fangirls, one obsessed with Blue Beetle, the other with Booster Gold. Interestingly, both are present to witness the battle and end up meeting each other in person, striking up an instant friendship. I wonder if they will be playing a significant role in the overall story. I suspect that Jurgens has some reason for putting them in the story.

Ryan Sook’s art complements Jurgens’ story nicely. I was particularly impressed with the glimpses of the alien world of Beh’imoor. I hope we get to see more of this world in the upcoming issues. And I quite like the design of the race that inhabits that world. I can imagine that they might cause some headaches for the fledgling United Planets. There are likely many other areas of the galaxy that they believe are their rightful property.

I don’t really have any complaints. Blue & Gold has been a fun romp so far, which is the kind of story that suits these characters best. 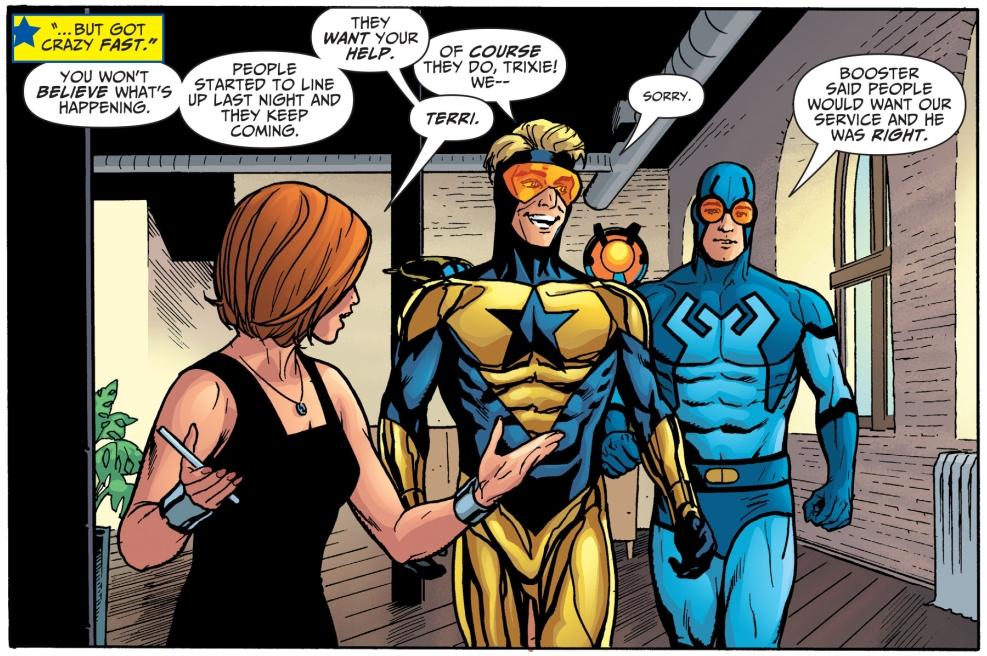 Blue & Gold #5 is another fine issue of Dan Jurgens’ highly entertaining buddy story. Booster and Blue Beetle are two of DC’s best characters, but they are criminally underused. It’s great that Jurgens has brought them back, even if it’s just for an eight-issue miniseries. Hopefully, this series will lead to further appearances of these heroes in other DCU titles.