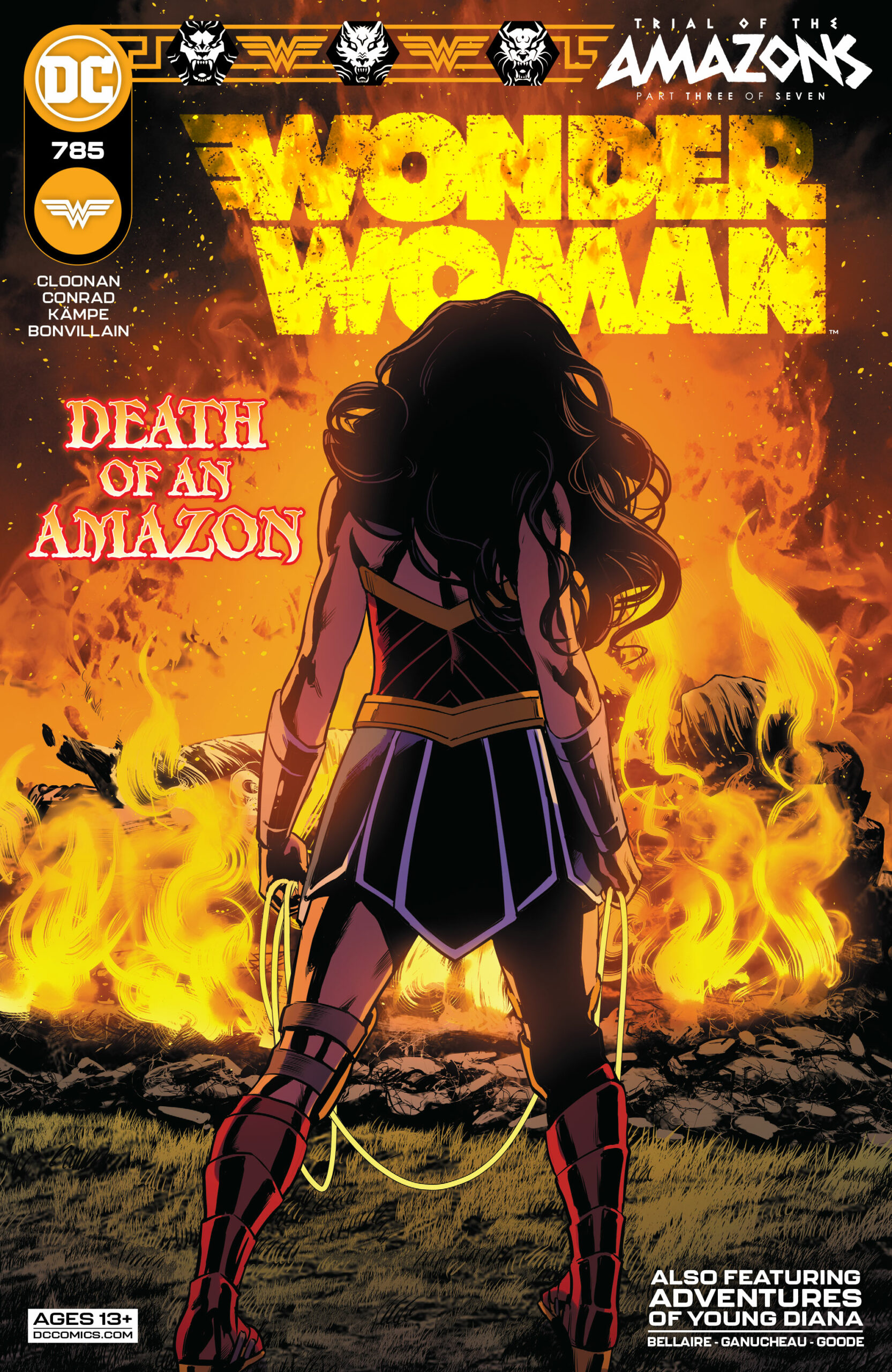 Diana has returned to Themiscyra only to suffer the murder of her mother.  The three tribes of Amazons subsequently set their contestants for the contest to guard Doom’s Doorway!

Wonder Woman #785 is Chapter 3 of “Trial of the Amazons,” and despite it being part of a larger story is still very accessible to readers not invested in the event.  It’s no secret why Conrad and Cloonan are able to make it work, they don’t abandon the approach they’ve had on the series since day one.  Even with all the political intrigue going on, the focus remains on Diana and her character and her personal loss.  Even if you aren’t here for the event, the issue makes you care about what’s going on because of how it relates to Diana as a person. 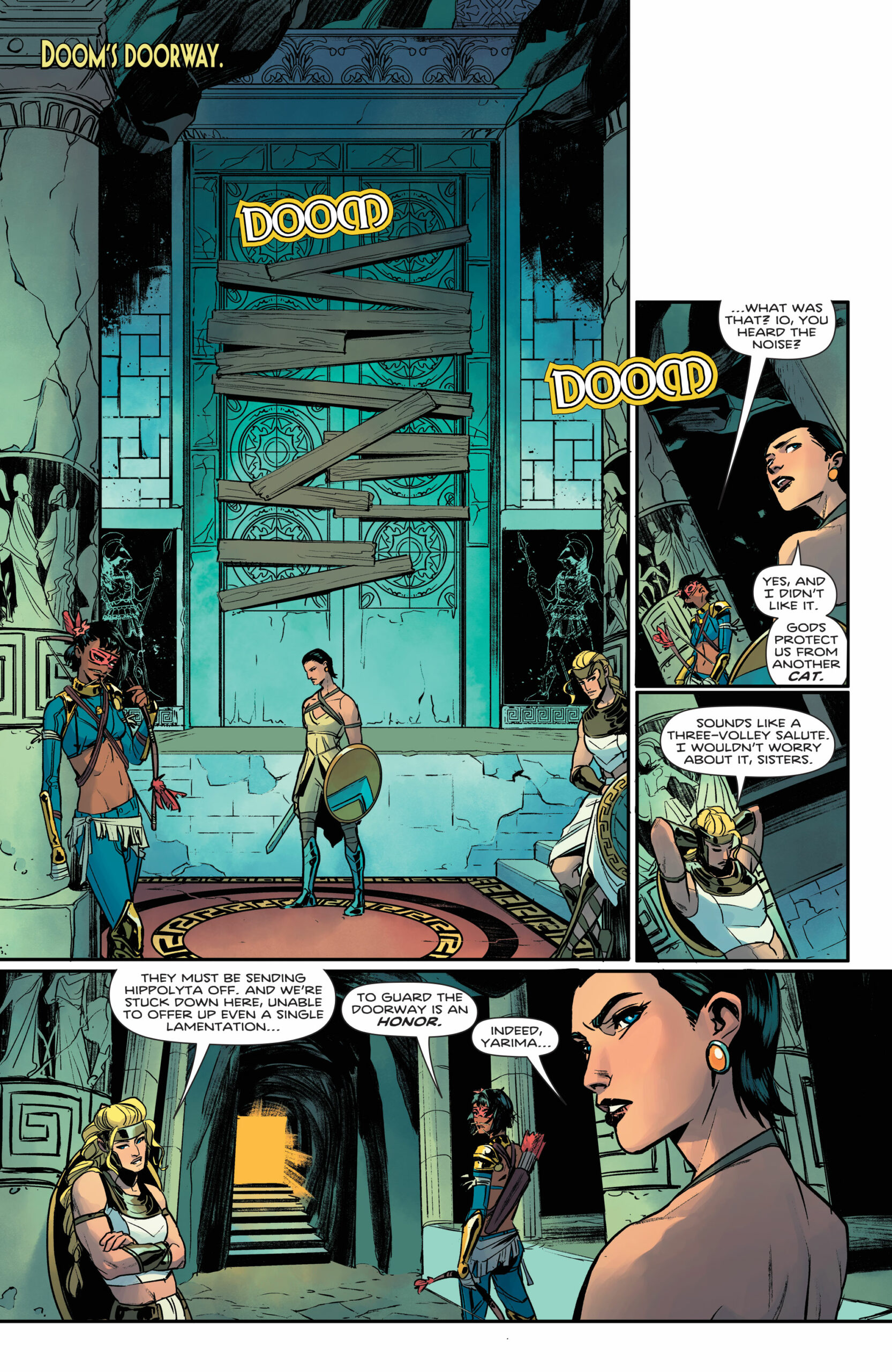 After the first couple pages, Wonder Woman #785 goes directly to Diana’s anger and frustration at the death of her mother and the red tape holding back discovering the truth.  It’s one of those easily relatable moments, you don’t need to be a demigoddess or super-hero to understand what Diana’s going through.

Diana’s decision to turn over the Lasso of Truth so that she won’t be tempted to use it on everyone on the island is a compelling moment, ask yourself if you’d have that restraint in the same situation.  It will be interesting to see if this gets explored further because I don’t think it would necessarily be a bad thing to do.  I mean, it would get to the bottom of things pretty quickly, though I suspect the culprit isn’t from any of the Amazon tribes. 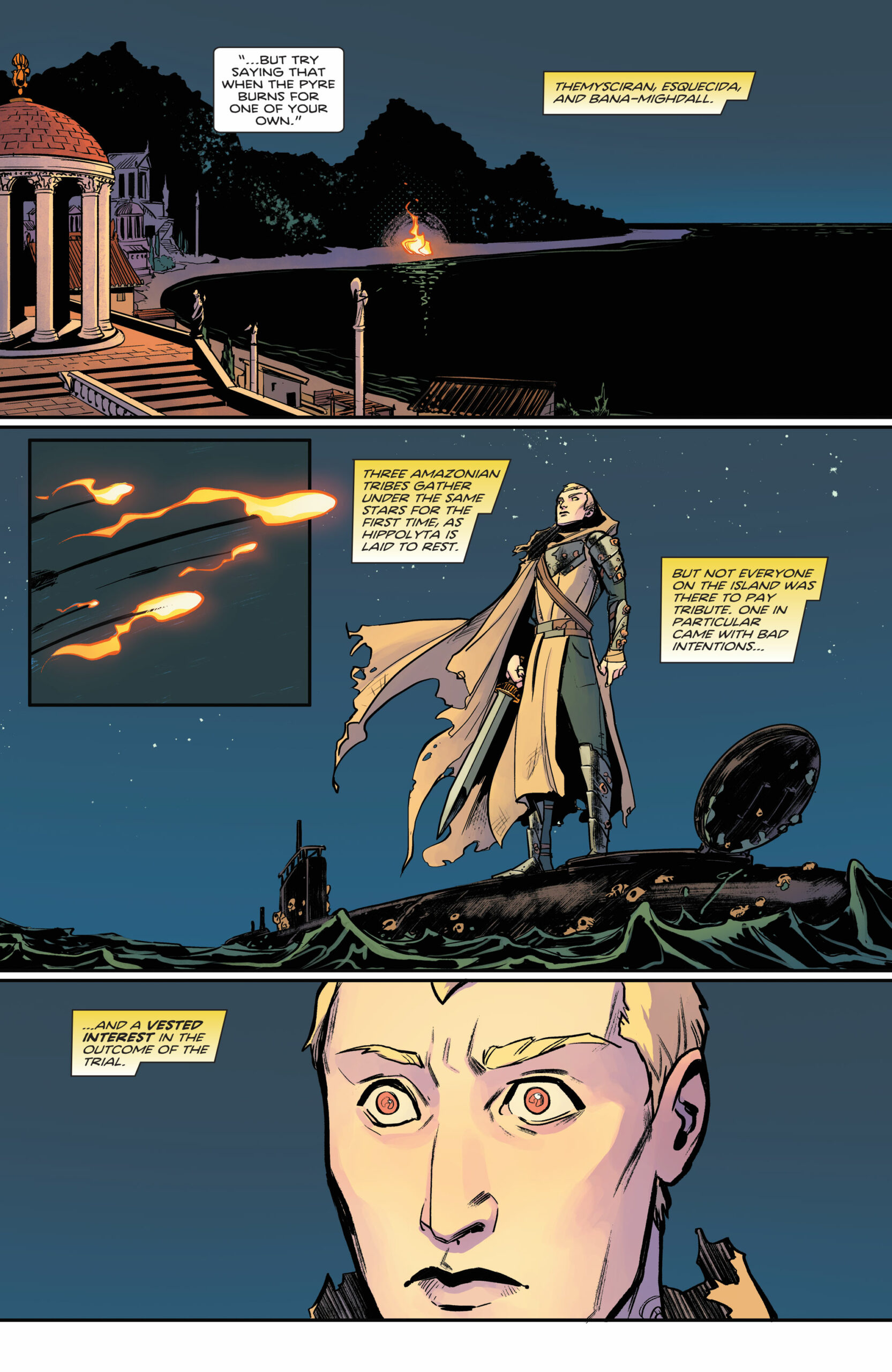 In the second feature, Young Diana, the future Wonder Woman is given a lesson by her mother as they visit Georgiana, the head farmer on Themiscyra.  It’s a nice lesson for Diana as she gets a different perspective on life.  Bellaire’s choice of name for the farmer is particularly significant, Georgiana is the anglicized feminine version of the Greek word, “georgos” which means “farmer” and from where we get the name “George.” 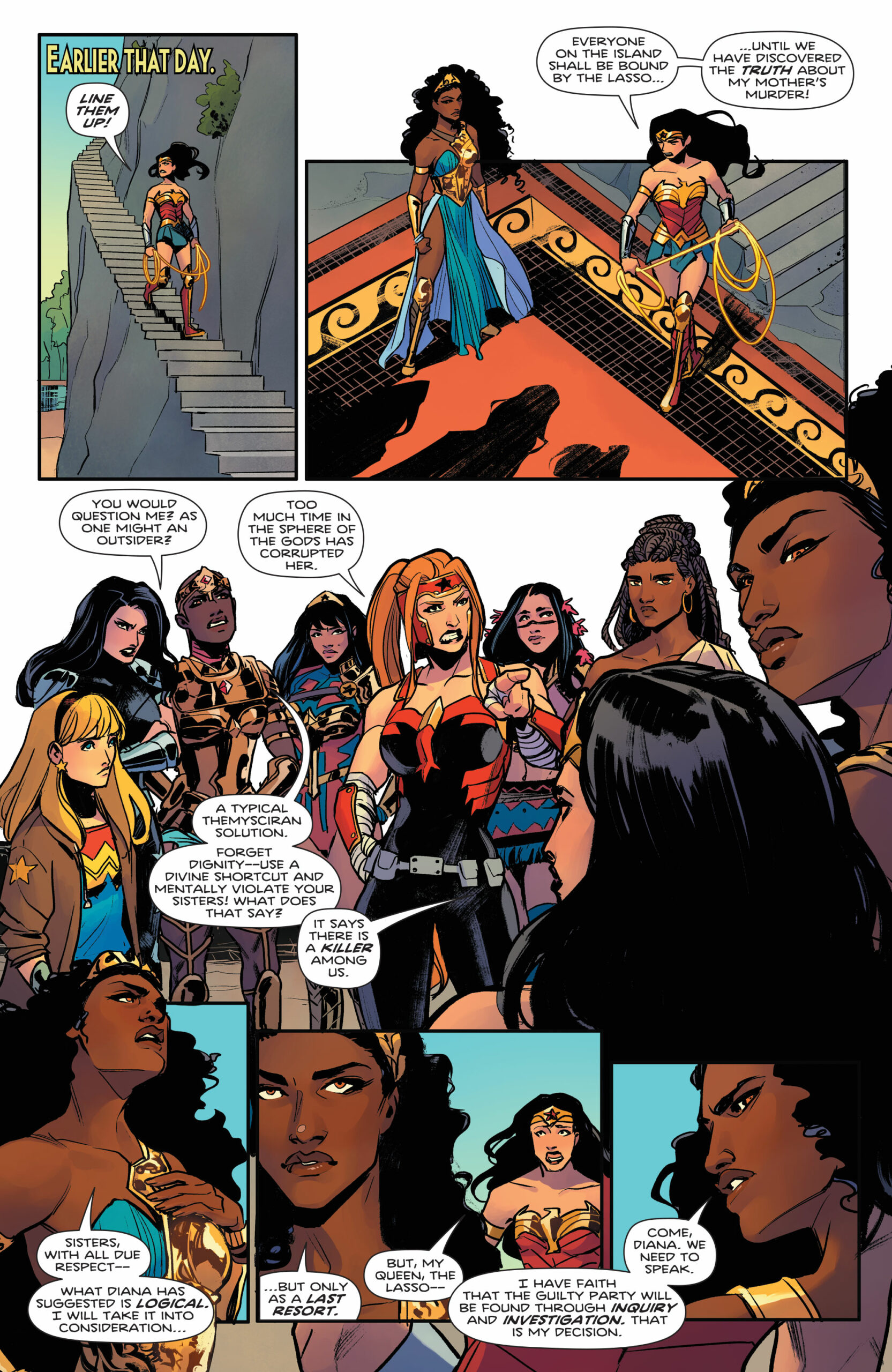 The plot movement in the “Trial of the Amazons” takes us to the reveal of the different contestants from each tribe.  To say there are a couple of surprises is an understatement.  While it’s expected that Yara Flor would represent the Esquecida, Donna Troy stepping forward for the Bana-Mighdall is the exact opposite.  While it’s great to see Donna in a significant role, this all feels like a setup to eliminate a “wonder girl” or at the very least set her as an adversary to Yara and potentially Diana herself.  Yeah, Diana has entered the contest as an at-large participant to represent ALL Amazons.  I definitely want to see the tribes come together as friends for the right reasons and not because they have to learn from a terrible misfortune above and beyond the death of Hippolyta. 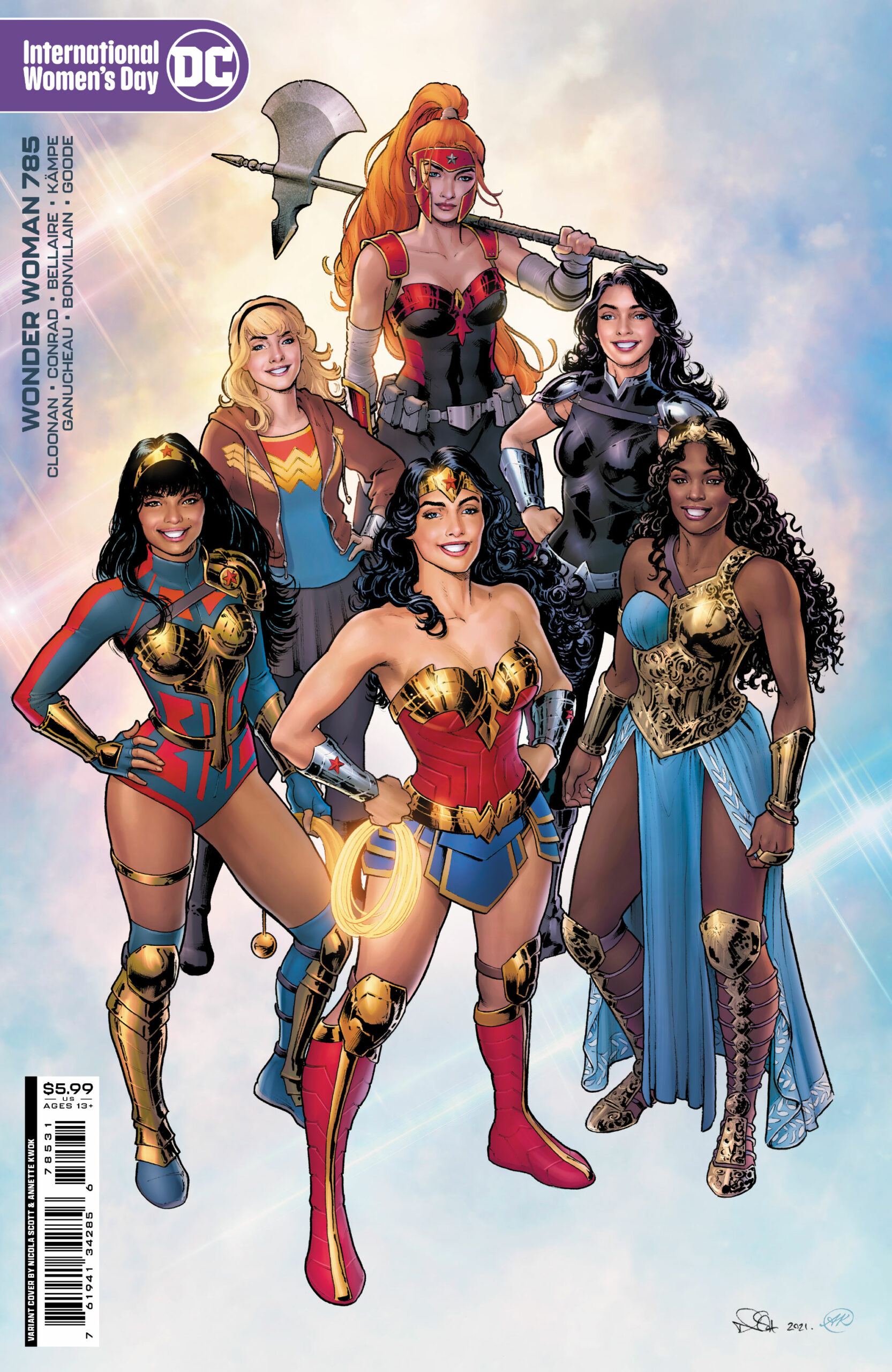 Wonder Woman #785 maintains a strong focus on Diana and thus succeeds in being a very good issue.  The endgame for “Trial of the Amazons” is still shrouded in mystery and therefore the plot movement makes me feel very suspicious.  Comics have a reputation of promising huge changes that are subsequently undone down the road so they lose any weight.  The issue is still mostly about Diana and her personal reactions to the events on Themiscyra and the death of her mother and that makes all the difference in the world with this issue.