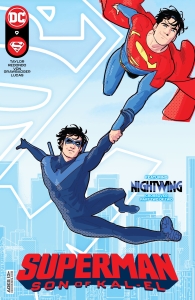 Superman: Son of Kal-El #9: Superman/Nightwing crossover part 2 of 2! Nightwing promised Clark Kent that while he’s off-planet, Nightwing would look after Clark’s son, Jon, as he tries to fill his father’s shoes as Superman. But with someone out there murdering superpowered people, is Nightwing in over his head? Read Nightwing #89 for part 1 of this crossover story!

Superman: Son of Kal-El #9 features the second half of Tom Taylor’s Nightwing/Superman crossover, World’s Finest Sons. Unlike many other title crossovers, the two parts mesh together well due to having nearly the same creative team on each. Tom Taylor has been doing a fantastic job on both titles, so a crossover makes eminent sense.

I really like the idea of Dick Grayson serving as a mentor figure to Jon. Jon has taken on his father’s role as Superman, which is a very large pair of boots to fill. Dick has similarly taken Bruce Wayne’s place as Batman more than once. We have also seen Wally West offer to give Jon some guidance. In Mark Waid’s stellar run on The Flash, readers saw Wally grown into the role that Wally inherited from Barry Allen.

Now Wally may have a bit of an edge on Dick. Dick was only meant to fill in for Batman for a limited time. But Wally took on the role permanently. Even after Barry returned from the dead, Wally and Barry shared the role, as Wally had truly become The Flash.

On the other hand, there is a nice symmetry to Nightwing mentoring Jon. Jon’s father Clark sometimes gave Dick guidance that he couldn’t get from the Batman. So, it’s great to see Dick paying that forward to Clark’s son. However, I don’t see that Jon can’t have both heroes as his mentors. I am sure there are lessons he could learn from both.

I absolutely hate Brian Michael Bendis’ story that left Jon stranded on Earth-3 for five years. He did this so that Jon could instantly be old enough for Bendis to use in his Legion reboot. However, Taylor is able to use that poorly executed story to add some poignancy to this story. Jon admits to Dick that “the whole time I was there, I just kept hoping, somehow, that you’d find me again”. 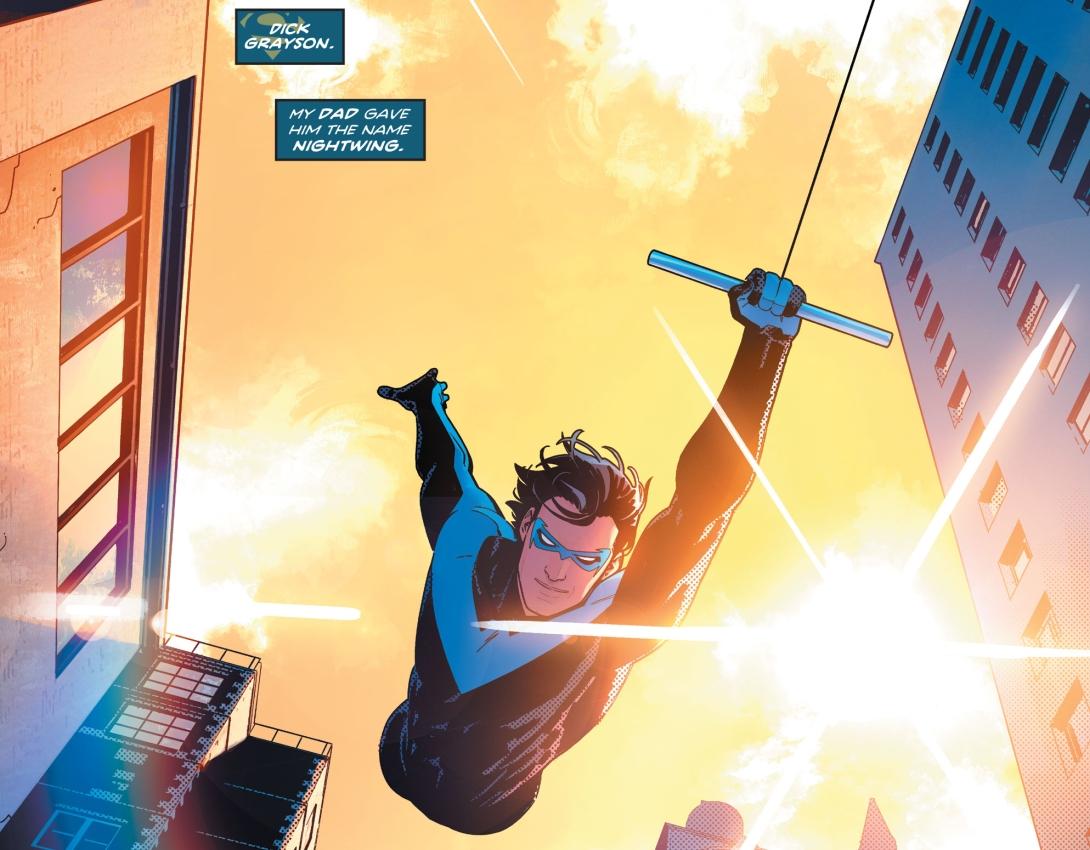 This shows what a powerful impact Nightwing had on a young Jon Kent during their first meeting (as shown in Nightwing #89). Dick had become a symbol of hope for Jon. Unfortunately, this hope wasn’t realized during Jon’s exile. However, as Dick tells him, “I’m sorry I didn’t find you Jon. But I’m here now”. So, there still is some hope for the future, even if Nightwing can’t do anything to fix Jon’s past.

There is also another interesting development. Dick has decided to use some of the wealth left to him by Alfred to fund the Truth. And as their financial backer, Dick asks Lois to be the public face of the Truth. This would give the Truth some major credibility. But what would Jon think about having his mother as his co-worker? And what does that mean that Lois would leave the Daily Planet?

I loved the scene that ensues when Jay phases through the wall into Jon’s bedroom to find Dick Grayson there with Jon. This leaves both of them wondering what the other is doing there. This pretty much outs Jay as the editor of the Truth and a metahuman to Dick. I don’t know if Jay will be let in on Dick being Nightwing. However, Jay must realize that Dick is more than just a rich investor.

During Dick and Jon’s investigation, they capture one of Bendix’s agents. But before they can get any information from him, Bendix kills him remotely. There is a touching moment as Dick comforts the shocked Jon, who just had someone die in his arms. Unfortunately, Bendix releases footage of the incident, making it look like it was Jon who murdered him. 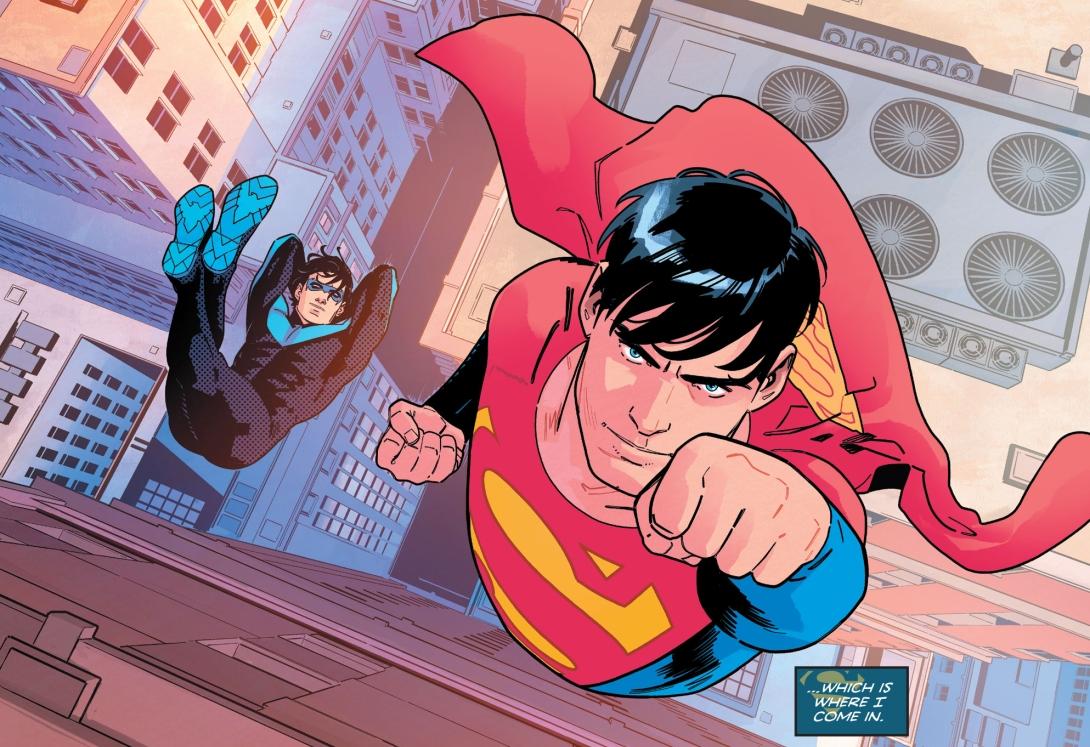 This appears to make Lois’ decision for her. When Dick asks her, “Lois? Want to stomp on some lies?”, she responds with, “Yeah, I’m in”. Although the situation looks rather bleak for Jon, Dick offers some words of hope, “We’ve got your back. Superman… you’re not trapped and you’re not alone anymore”. These were the exact right words for Dick to say here, especially when he makes a point of addressing Jon as Superman.

While Tom Taylor’s Nightwing has been an unqualified success, some fans are not quite as receptive of Superman: Son of Kal-El. This crossover is likely to attract some of the former title’s readers, and hopefully, they will be pleased enough with this issue to stick around. Son of Kal-El is too good to remain in the shadow of Clark’s adventures in Action Comics and deserves to become a big hit.

Superman: Son of Kal-El #9 shows what a gem this title is. While his Nightwing generally gets more appreciation, Taylor is doing a fantastic job on this title as well. Hopefully, this crossover will win over some of the readers who haven’t been following this series. This was an amazing two-part story, and I hope it’s the first of many.