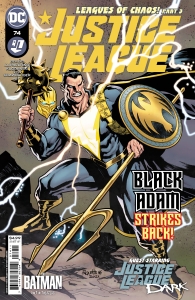 Justice League #74: Justice League Dark crossover conclusion! Another full double-size issue crossover spectacular as Xanadoth, the original Lord of Chaos, has returned. With unlimited power and revenge against all on its mind, the Lord of chaos has taken the form of Black Adam and no. One. Is. Safe. The final chapter of the Eisner-winning Bendis Justice League run wraps up with a brand-new status quo for all!

Justice League #74 marks Brian Michael Bendis’ run as writer of the series. Bendis’ work for DC over the past few years has been rather polarizing. Some readers absolutely love his work for DC. And others absolutely despise it. Personally, I am ambivalent about it. His writing has been very hit-and-miss. Sometimes he can come up with some great stories, but he can’t do it consistently. And unfortunately, his run on Justice League has been the weakest of his work for DC.

One major problem with his run on Justice League is his obsession with reprising characters and plotlines from his other DC books instead of taking the team in new directions. Thus, we got the Synmar Utopica, the new Checkmate, the United Order. And in this final storyline, Xanadoth. A villain so generic and forgettable, that I forgot he had appeared before this story.

And of course, the most egregious example of showcasing his own creations is Naomi. Don’t get me wrong. I don’t dislike the character, and I think her story has some potential. But some of Bendis’ Justice League issues read like a Naomi title the League is just guest-starring in. I don’t mind her being on the team, but she shouldn’t be the focus of the book. 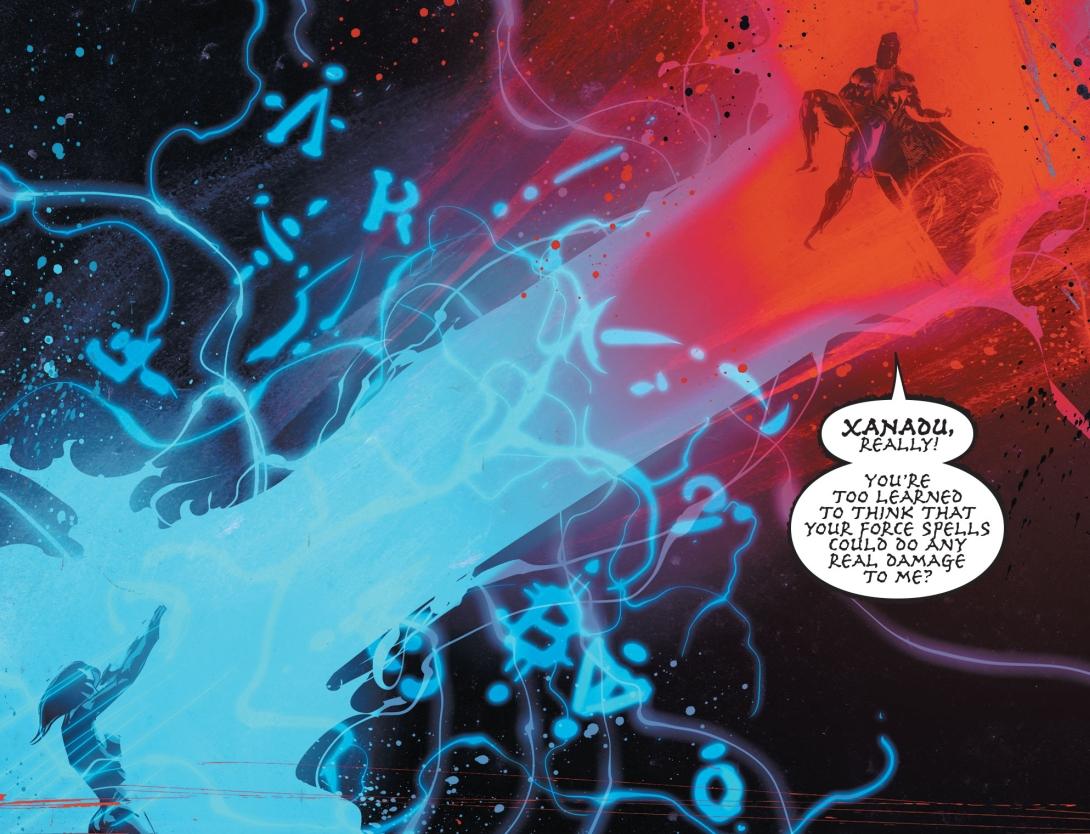 And of course, Naomi again plays a central role in the defeat of Xanadoth. Last issue Nabu pulled Naomi into another dimension. This is so that he could grill her about who she is and where she came from. This is because the mighty Lord of Order is oh so very impressed by the power and awesomeness of Naomi.

Nabu reveals that Naomi’s powers can amplify magical energy. This is a new wrinkle to her powers that came out of nowhere and don’t really seem to fit with the origin Bendis has given her. It just seems like something Bendis pulled out of his butt to once again put Naomi at the center of the story. At least Naomi is sharing the spotlight with Black Adam this time.

Bendis previously hinted at some connection between Xanadoth and Madame Xanadu. Bendis shows Xanadu picking up on those hints, and noting the similarity in their names. But Bendis just has Xanadoth refuse to elaborate when Xanadu asks about the connection between them. Bendis just leaves the issue hanging, despite the fact that it’s the final chapter of this story and Bendis’ final issue of Justice League. He just leaves it for some future writer to explain. Honestly, I hope those future writers just ignore it and let it be forgotten.

I don’t know why the solicitation text claims that Bendis’ run “wraps up with brand new status quo for all”. The ending sees no changes in membership in the team, no deaths. Not even any new costumes. Instead, what we get is yet another shining example of how Bendis doesn’t understand the character of Batman. Bendis actually has the gruff and taciturn Dark Knight giving a short speech about how amazing and wonderful Naomi is. A decent writer would have had Batman tell her “Good job”. And one of the others would inform her that this is high praise from him.

I could be facetious and state that Bendis leaving the title is a positive. However, Bendis can be a brilliant writer when he puts his mind to it. Unfortunately, he wasn’t bringing his A-game to this title. His Justice League pales compared to his run on Young Justice. Hell, it’s not even as good as his run on the Superman titles, which left a lot to be desired.

The good news is that Joshua Williamson is taking over as writer next issue. The bad news is that it will be the final issue. It might be unfair to say that Bendis’ run brought about the literal “Death of the Justice League”. But I have to wonder if flagging sales during his run was a contributing factor in DC’s decision to ax the title. 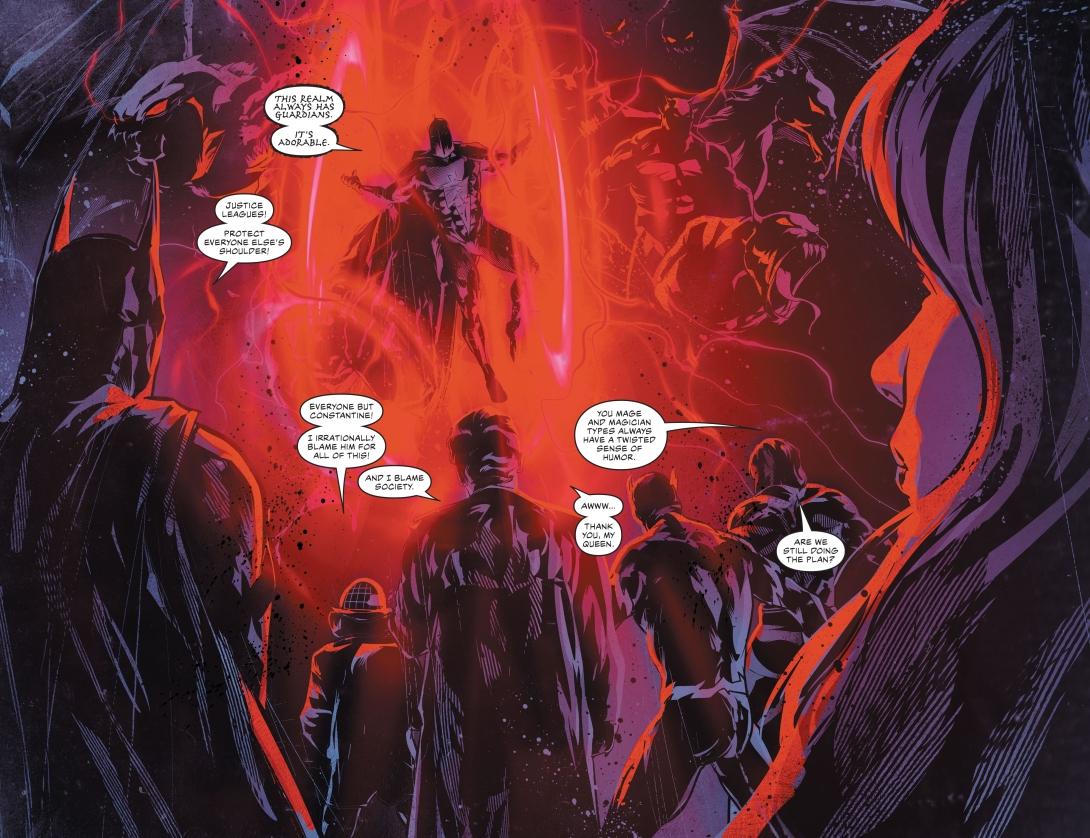 Despite the writing, the artwork was superb. The contrasting styles between the confrontation with Xandoth and the scenes set in the Hall of Justice work really well. The supernatural nature of the fight is brought out by the slightly more abstract style and dark colors. While the everyday world of the League is bright and colorful. And all the characters look their iconic best in both realms.

Justice League #74 was emblematic of Brian Michael Bendis’ entire run on the title. Bendis is great at producing ideas with a lot of potential, but he often has trouble realizing that potential. I think the main problem was that he had trouble remembering that this title was about the Justice League first and foremost.  However, I do wish him well on his other projects. Hopefully, they will work out better for him.