“Nightmare Country” – Chapter One, and “The Dreaming”

The worlds of Neil Gaiman’s Endless saw a strong resurgence with DC Comics’ Black Label titles. Sadly, these books seemingly came to an end in 2021. I was saddened by the cancellation of The Dreaming: Waking Hours last year, and the short (but excellent) Sandman/Locke & Key: Hell & Gone mini-series came and went far too quickly. Thankfully, James Tynion IV and his companions are now set to make all our dreams (good and bad) come true, with Sandman Universe: Nightmare Country #1. 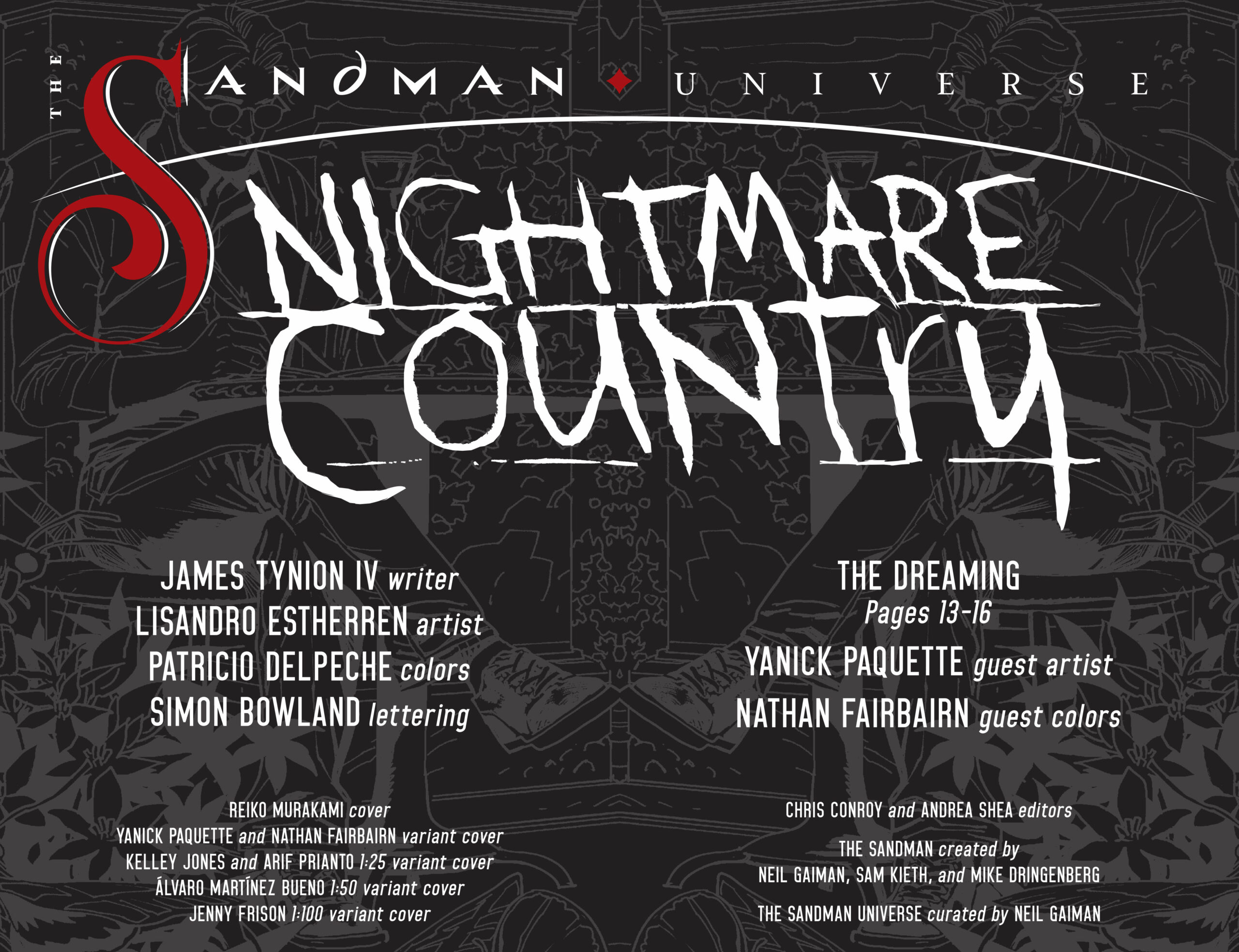 This is a seriously good comic, and as strong a first issue as I could’ve wished for. James Tynion is one of the foremost horror writers in comics, and the incredible art teams in this book are as phenomenally talented as he is.

The main story, “Nightmare Country” is one of those tales that seen to bathe you in a slow, creeping, stream of horror that makes you feel like you’re drowning. Lisandro Estherren’s beautiful art then elevates that feeling because it’s the equivalent of sinking into sweet, delicious, but ultimately deadly honey.

The interlude, “The Dreaming” is more realistically drawn by the wonderful Yanick Paquette. I usually hate it when one comic is handled by more than one art team, but it really works for this issue. Yanick’s story is set in The Dreaming but is drawn more “real-world” in style, while “Nightmare Country” is mostly set in the real world, but is visually dream-like, and nightmarish. I love that. What’s also incredibly impressive is the way that the two hugely talented color artists, Patricio Delpeche and Nathan Fairbairn, have further separated the feel of the art with warm, psychedelic colors in the main story, juxtaposed by cool, flatter hues in the interlude.

If you’ve read my Hell & Gone review or listened to any of the podcasts I’ve made that expound on the subject of Neil Gaiman’s Sandman and The Endless, you already know how much I adore this universe. Having a comic that’s clearly been created by talents who love those stories as much as I do fills my heart with joy. The fact that the main protagonist is The Corinthian shows a real knowledge and appreciation of what came before this new series, and a huge understanding of the worlds Gaiman and his many collaborators created.

Another wonderful aspect of Sandman Universe: Nightmare Country #1, is that the human characters are every bit as interesting as the dreams and nightmares that are invading their world. They’re deep, flawed, real, and sympathetic, which has already made me feel for them, and want to continue following their story. Simon Bowland’s creative lettering also helps the nightmares sound inhuman and adds to the tension and drama. His reworking of the old “Dream Country” logo (Sandman book three) is an evocative and a brilliantly thoughtful plus.

Once again, I am far too poor to be able to buy all those gorgeous alternate covers. Wow, they’re so beautiful.

I cannot wait for issue #2! This series has had an amazing start and has already 100% pulled me into the story. Are the two Misters at the end of the book kin to The Corinthian or, even worse, just sick evil human beings (the real monsters)? Are they also a loving tribute to Neil Gaiman’s Neverwhere characters, Messrs Croup and Vandemar? Either way, both the human and Nightmare characters have grabbed my attention and left me wanting more.