The Flash #784: The search for Barry Allen! Wally and Wallace have arrived on the planet Pariah has trapped Barry on—but it’s not quite a happy reunion among the Flashes. The Dark Crisis tie-in storyline continues!

The Flash-Family continues their search and rescue mission for Barry Allen. However, with three possible worlds where he might be, they have had to split into teams. The issue opens with Jessie Quick and Max Mercury on a parallel Earth that’s rather reminiscent of the Mad Max movies.

What I think is most interesting about this world is how Jessie and Max immediately prove that super-speedsters drastically outmatch standard vehicles – even the outlandishly tricked out cars and trucks of this Earth. I suspect that this world won’t pose much of a challenge for these veteran heroes.

However, Jai and Irey will likely have a challenge ahead of them, as they find themselves facing Night-Flash, who appears to be a mashup of Batman and The Flash. Presumably, this is this world’s Barry, so we don’t know if he’s a hero or a villain on this world. In either case, he doesn’t appear well disposed to the kids. I also have to wonder what happened to Jay Garrick, who attempted to follow them to this Earth. Did something happen to him? Did he get diverted somewhere else? Or perhaps his arrival on this world is imminent.

The main thread of The Flash #784 involves Wally and Wallace, who have found Earth-0’s Barry Allen on Pariahs Earth-Flash.1. Wallace suggests an interesting idea that seems logical at first. Wallace wonders if they aren’t on the wrong Earth, and this Barry actually is the one from this world. On the face of it, this could just be an Earth representing a version of DC’s Silver Age Flash.

However, Wally notes that this Barry appears older than he was when Wally was the same age as this world’s Wally West. This makes me wonder how much in universe time has passed since Wally was Kid Flash. 10 years? I suspect that Barry is not that much older that it’s noticeable to most, but Wally is knows Barry well enough to notice the smaller differences that Wallace misses.

However, rescuing Barry from Pariah’s world proves to be a rather difficult task. First, there is the underlying issue that Barry doesn’t want to leave. This world is a wish-fulfillment fantasy that gives him everything he wants out of life. On top of that, when Wally confronts Barry, his uncle sees him as the Reverse-Flash, Eobard Thawne. Presumably, this is an illusion created by Pariah but it proves effective, as getting Barry to listen when he thinks he’s seeing his greatest foe seems an insurmountable task.

Meanwhile, this world starts trying to get its hooks into Wallace, feeding him his own fantasy. He encounters a version of Wally who has retired, leaving the protection of Earth up to Wallace, who apparently goes by the hero name Burst. I find it interesting that his costume as Burst appears to be the chrome-plated costume he was introduced with during the New 52. When Wallace wore this costume, he was meant to be the reimagined Wally West himself, not his younger cousin. He wasn’t the inheritor of the role, but a version of the original. I wonder what that says about his desires that Pariah’s world has put him in that costume.

We see Wallace settling down to the dinner table, surrounded by a version of the Flash-family tailored to his own desires. Amancay Nahuelpan has cleverly shown this scene as a mirror image of Barry doing the same in the epilogue of Infinite Frontier #6. This is even down to the smallest details, such as the clock on the wall showing the same time. The only difference is in the characters present. But this image is important, as the original shows the exact moment that Barry gave into the illusion. And this implies that Wallace has likewise given in. Wally may manage to free Barry only to find that he must do the same for Wallace. 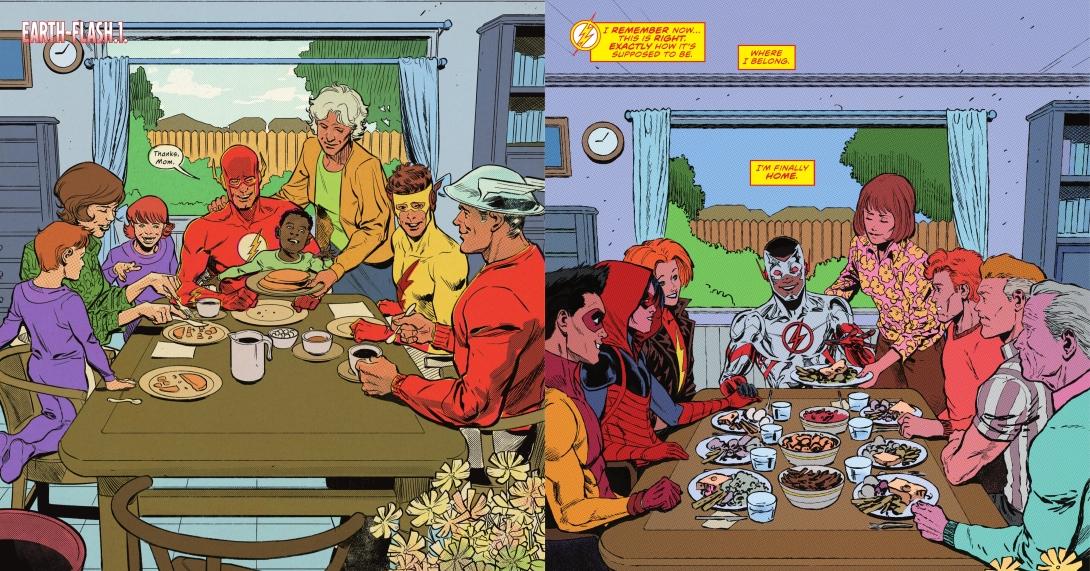 I love the way Nahuelpan has captured the feel of the Silver Age Flash comics in his depiction of this world. The use of Ben-Day dots to simulate the printing method used in that era is a brilliant choice. Nahuelpan’s work on this story arc has been impressive and I look forward to seeing more of his work in the future, whether it be in this series or elsewhere.

Jeremy Adams has been writing The Flash for over a year without the slightest misstep and this latest issue does not put an end to that streak. While Nahuelpan is new to the series, he’s off to a phenomenal start. I can’t even find any minor continuity or technical errors to complain about.

The Flash #784 is another fantastic issue from Jeremy Adams. While this has always been one of my favorite comics, it has become my very favorite in the Rebirth and Infinite Frontier eras. With Adams writing it, it will likely hold that place for the foreseeable future.