Review: JUSTICE LEAGUE VS THE LEGION OF SUPER-HEROES #5 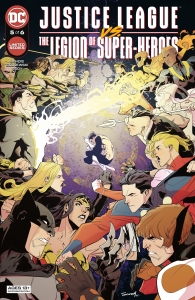 This time-spanning epic stars all your favorite superheroes from two different time periods! Batman! Saturn Girl! Superman! Brainiac 5! Naomi!, and dozens more race into battle to save the galaxy from being pulled apart… but at what cost? Will everyone survive this?

Matt: The fact that something actually happens in this issue is a positive.  It’s not well placed or paced, for the overall story, but something indeed does happen.  How it happens is another matter entirely, but we’ll get to that.  I’m not usually one to spoil big stuff in a review, but it’s about the only positive that we can discuss- the JLA and LSH figure out who’s behind this “Great Darkness.”  Turns out it’s none other than Vandal Savage!  This could’ve been really interesting if the story had been put together better.

Derek: Having Vandal Savage turn out to the villain is actually a brilliant idea. As an immortal, Savage would presumably still be around in the 31st Century. So it’s actually surprising that he hasn’t been a major presence in the Legion’s history before this. Unfortunately, as is typical with Bendis, this great idea is let down by a lacklustre execution. Bendis didn’t give the slight hint to foreshadow this ending. Savage’s appearance should have engendered a reaction of “oh, it all makes sense now”. But instead, it seemed more like random happenstance. 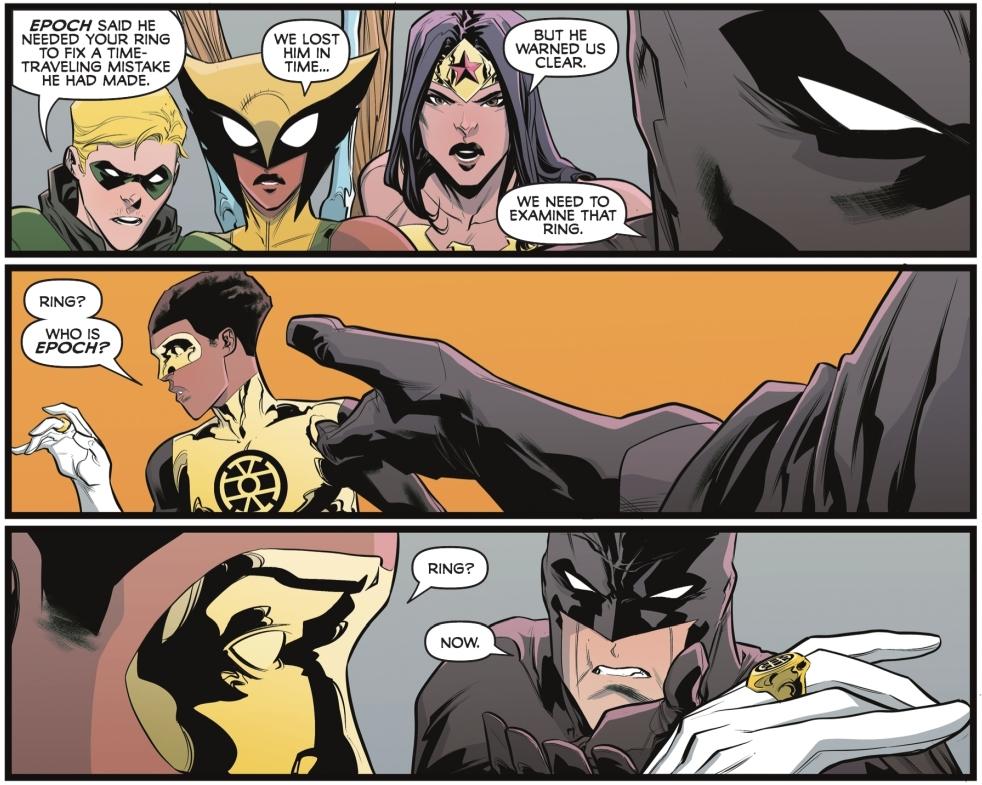 Matt: Despite Bendis’s time at DC Comics being not only completely forgettable and an unmitigated mistake of Biblical proportions (dozens of people should be fired for it), it is interesting that Bendis has managed to tie in all his DC work into this story.  You may, or may not recall that early in his tenure at DC Bendis wrote a Batman story called, Batman Universe which was serialized in the Walmart exclusive Batman Giant 100-Page Super Spectacular.  Ironically, this Batman story is probably Bendis’s best DC work.  Bringing all of this together somehow gives a connectivity to the stories like they should matter, even if they aren’t really that interesting or well executed.

Derek: Bendis is not a bad writer, per se. But I agree that his work for DC has not been his best work. I loved his Ultimate Spider-Man for Marvel. That Batman story you mentioned was pretty good as well. And although his general direction for the Superman books was disastrous, he still did occasionally produce a decent story. Overall, his work for DC has been pretty hit-or-miss. And while I wish it were otherwise, this series is not one of the hits.

Matt: Like I’ve said in previous reviews of this series, Bendis just can’t seem to execute the interesting ideas he does have.  This should have been issue #2 or #3 of this series, not #5.  If the two teams had been through a bunch, figured out the clues and uncovered the identity of the villain with three issues remaining for the capture of Savage and resolution of the trouble he’d caused it would’ve been a lot more enjoyable and well-executed a story.  Instead, it’s all got to wrap up in a single issue.

Derek: It seems to me that Bendis was flitting around from one “cool” story idea to the next for the last four issues and suddenly realized that he hasn’t progressed the story very much. So, to catch the story up to where it should be, Bendis relies on what he believes is his strength: dialogue. And so, Justice League Vs The Legion of Super-Heroes #5 is pretty much a special all-exposition issue. There isn’t a whole lot of action here, but the characters standing around, reasoning out the plot.

And saying “reasoning out” is being generous. The dialogue is presented as if that’s what they are doing. But the dialogue is more like a random stream of consciousness that eventually stumbles onto the truth. 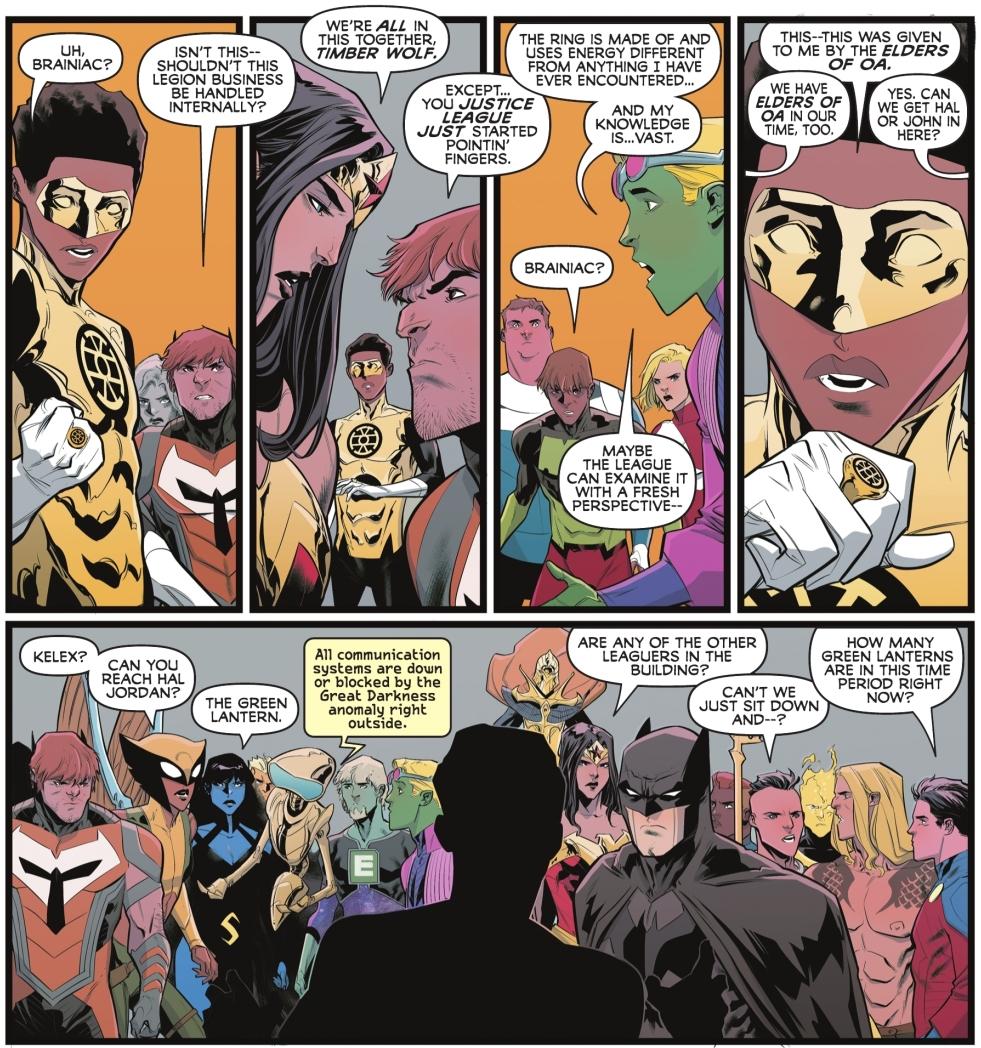 Matt: A well-written story would’ve revealed clues along the way instead of relying on a large information dump in a single issue.  The use of Thorn in Bendis’s stories seems to have been leading up to this one moment as a MacGuffin that allows her to solve the mystery of the temporal perpetrator.   She played almost no role in his Legion of Super-Heroes series.   It’s all too quick and pat to be interesting.  Batman couldn’t figure it out.  Brainiac 5 couldn’t figure it out, but Rose Forrest could?  Yawn.  She didn’t even figure it out in an exciting way.  It’s all off panel, in her own mind.  “Hey, look what I’m thinking!”  Bendis’s script didn’t even give Godlewski something interesting to draw in this sequence.

Derek: Bendis clearly intended Thorn to be a major part of his Legion story originally, but he seems to have forgotten about her. Thus he hasn’t prepared a proper role in this story for her, and now he’s struggling to cram her into the story anyway. And it’s actually not surprising that neither Batman nor Brainiac 5 never figured out what was going on. They are logical thinkers, and Bendis’ plot doesn’t really make a whole lot of logical sense.

Matt: This may be one of the weakest comics I’ve read in a long time.  Bendis almost is able to cover a few interesting ideas with Triplicate Girl and Jo Nah’s personality, but it’s very minimal and nearly forgettable as the overall story is deeply flawed and ultimately uninteresting because of Bendis’s inability to put a decent story together.  Even if you’re still reading this series, I can’t imagine that anything in this issue is going to bring you back for a finale that is already obsolete.  We already know what happens next, and Bendis hasn’t put the work in to make the journey engaging.

Derek: Despite Bendis’ attempt to get the story back on track, it seems like a lost cause at this point. I strongly doubt there’s any way Bendis can turn this all around in the one issue left to him. And that’s a shame. There’s a great story here struggling to get out. If DC had assigned a more capable writer to take Bendis’ basic plot, weeding out the distracting diversions and pointless dialogue, this could have been a great story.