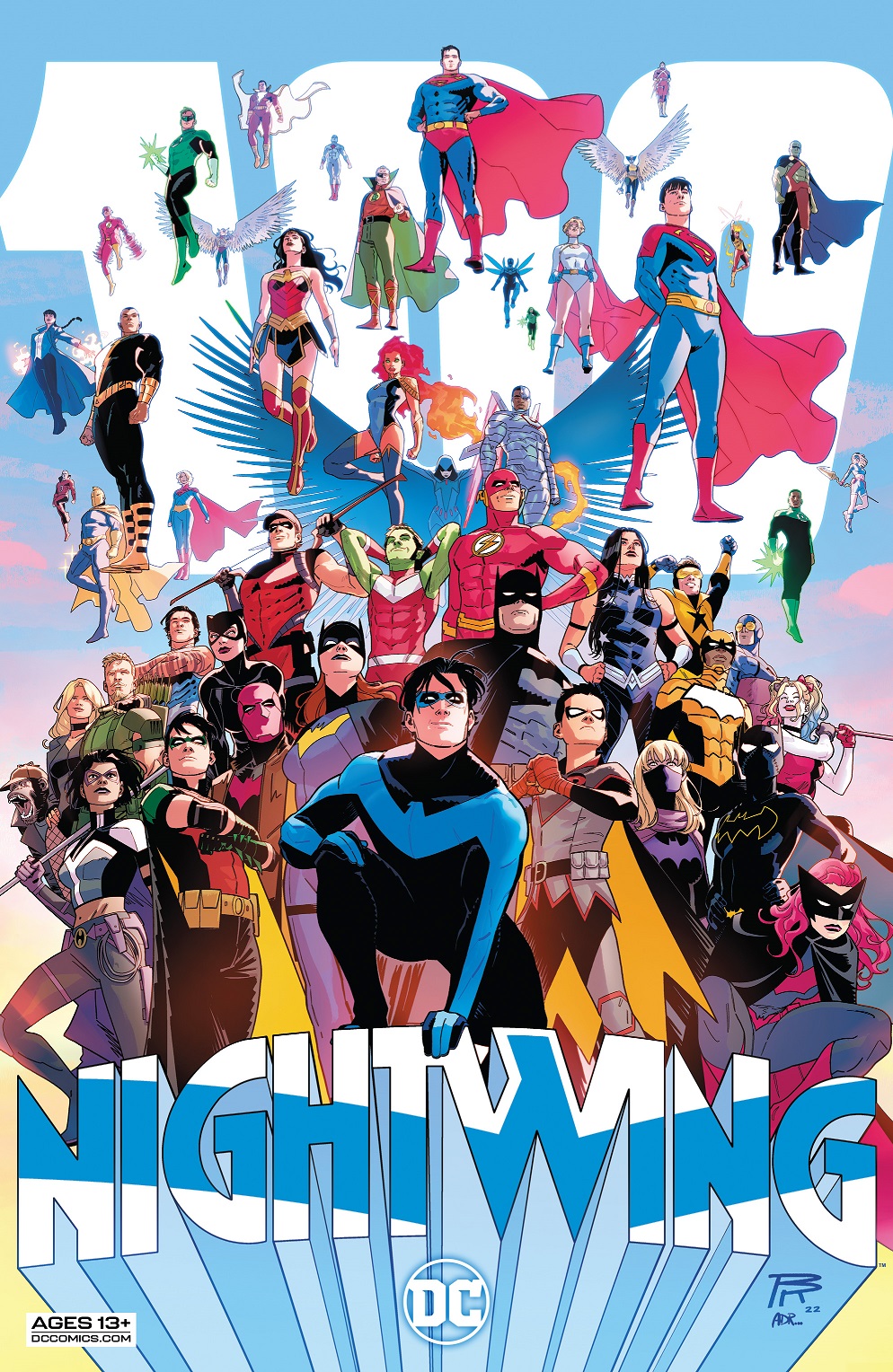 Heartless makes a play for the soul of Blüdhaven and Dick counters with well…damn near everybody…showing why he is the HEART of the DC Universe, in this moth’s landmark Nightwing #100.

“You will believe a comic can make you cry” should be emblazoned upon the cover of Nightwing #100.  I gravitate towards comics that are character and relationship focused.  That is certainly the heart of this issue, and of course with Dick being the heart of the DCU it’s a no-brainer that his opposite number should be Heartless (see Nightwing 2022 Annual for more on this.)  It seems sort of obvious now, but Taylor has slowly built up Heartless over his run on Nightwing and it’s making more and more sense.  As nice as it is to see this coalesce, the most amazing aspect of Nightwing #100 is the emotional exchange between Dick and Bruce (Batman) Wayne. 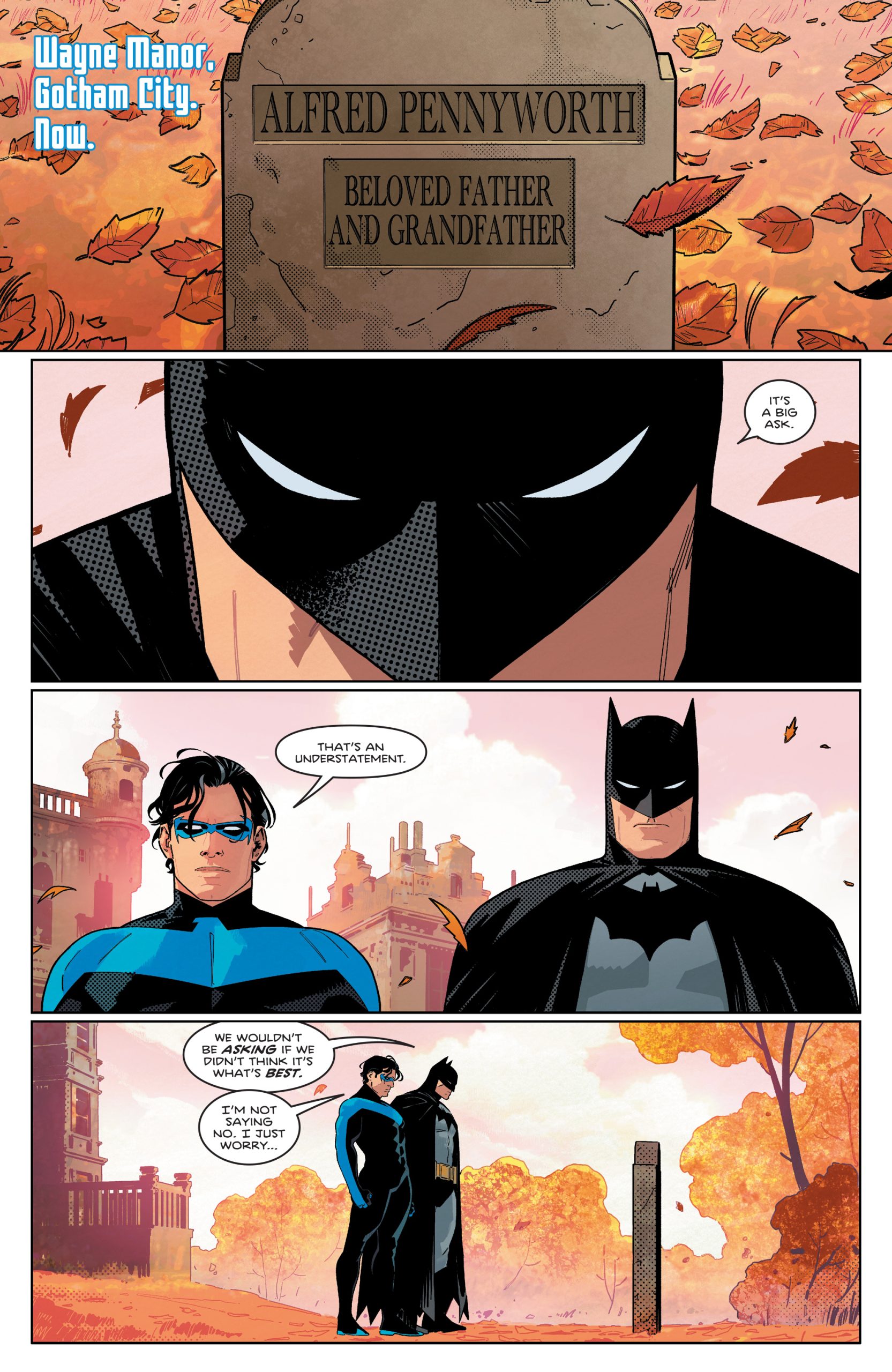 Over the years, Bruce has been depicted the cold, distant, emotionally flatlined and oppositely the “father” of a super-hero family.  Readers have their favorite version of the character, but I’ve always preferred the more adjusted takes.  The sweet spot for me is the Bronze Age when Batman could be a dark, menacing creature of the night, but at the same time be a real person who, while driven had recognizable relationships with those in his supporting cast.  It may not have always been wine and roses, but you never got the feeling that Bruce was a borderline sociopath.  Nightwing #100 places a stake in the ground that gets Bruce closer to that Bronze Age incarnation.

Dick Grayson first appeared in Detective Comics #38 and was quickly made Bruce Wayne’s legal ward.  In the Golden Age the relationship was depicted somewhere between father/ son and older brother/ younger brother.  In the ensuing years the relationship would go from best buddies to barely being able to talk to each other.  What finally happens in Nightwing #100 is a pivotal moment for both men as they finally acknowledge to each other their father/ son relationship in a meaningful way.  It not only acknowledges that they are father and son, but that they feel the love that exists between parents and children.  It may not seem like it from this description, but in the moment this is where the tears come in. 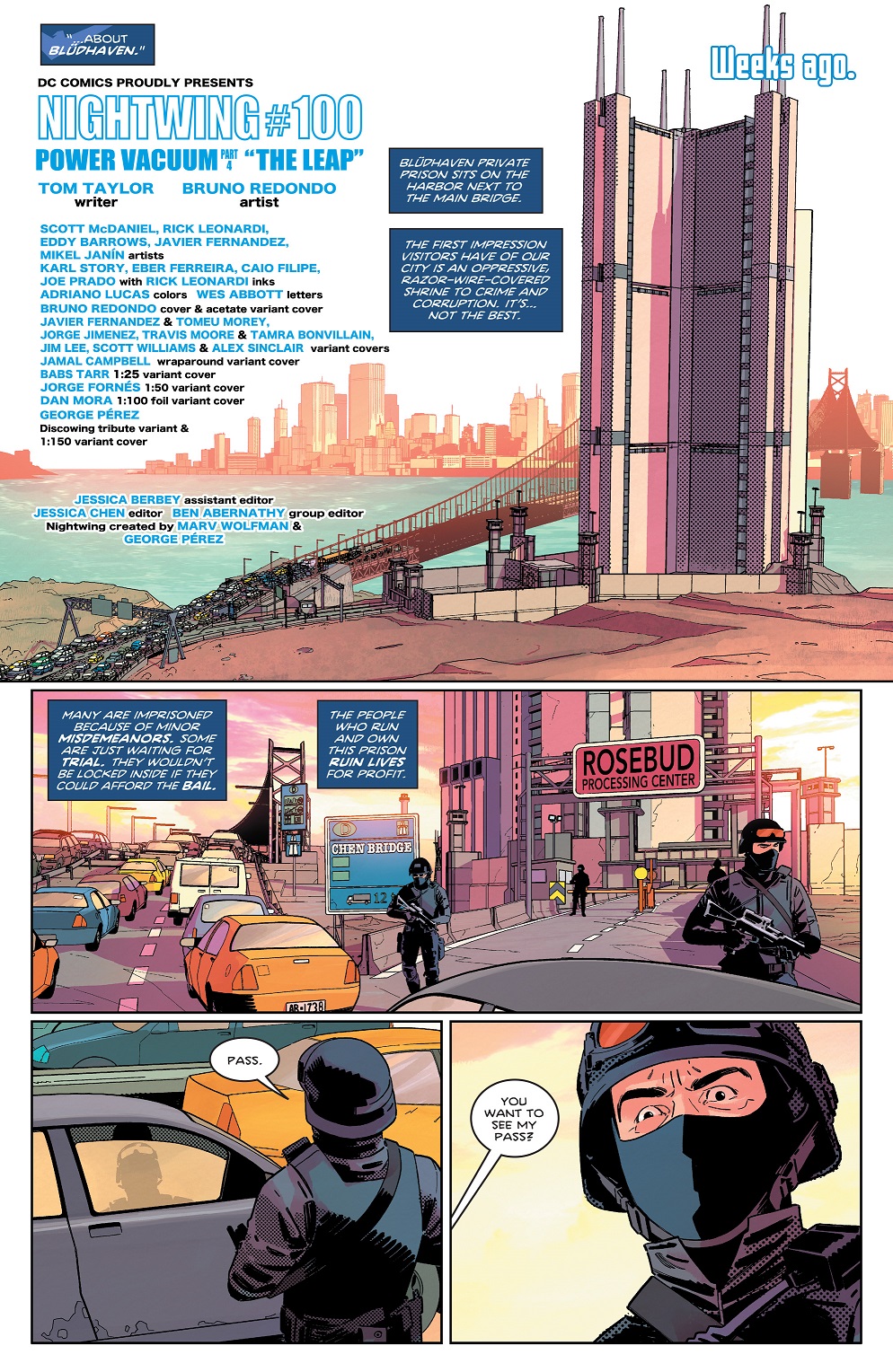 Dick and Babs (Barbara Gordon) enlist nearly the entire DC U in stopping Heartless.  After this, Superman, Batman and Wonder Woman make Dick the offer to lead the Justice League and take the lead in defending the Earth.  Dick’s choice is the choice that makes the most sense for him as he reunites the classic New Teen Titans line up and revives the Titans.  A lot happens in this issue including a maybe stealth proposal to Barbara?  It’s so quick, you might miss it, heck, maybe I’ve misinterpreted it.  It’s an anniversary issue that nails down a lot of absolutes about Dick’s character and it’s beautiful..  Instead of multiple tales that depict different bits and pieces of his character they all are contained in the single story.  However, the issue is illustrated by numerous artists from Nightwing’s past for the nostalgic aspect. 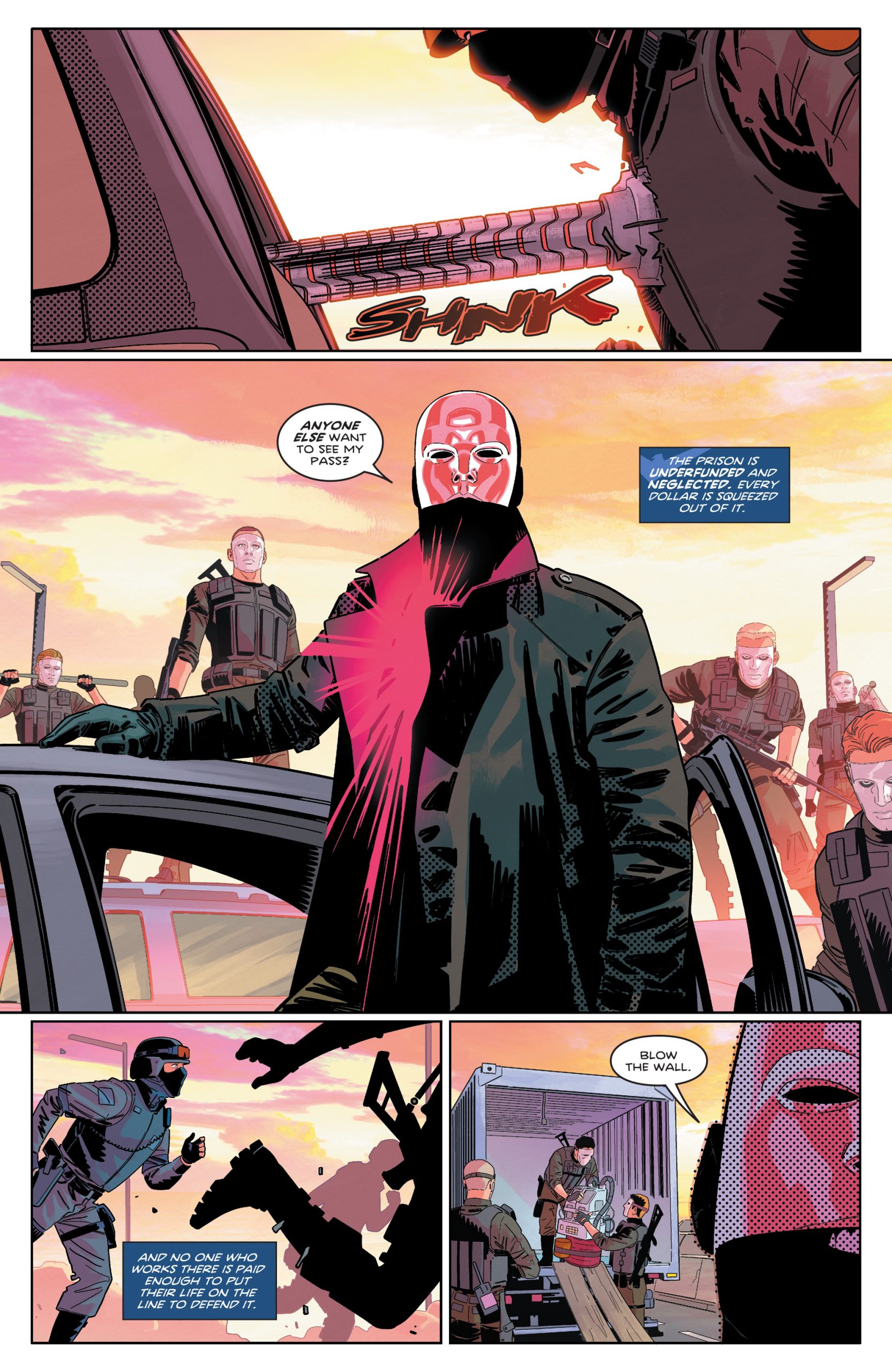 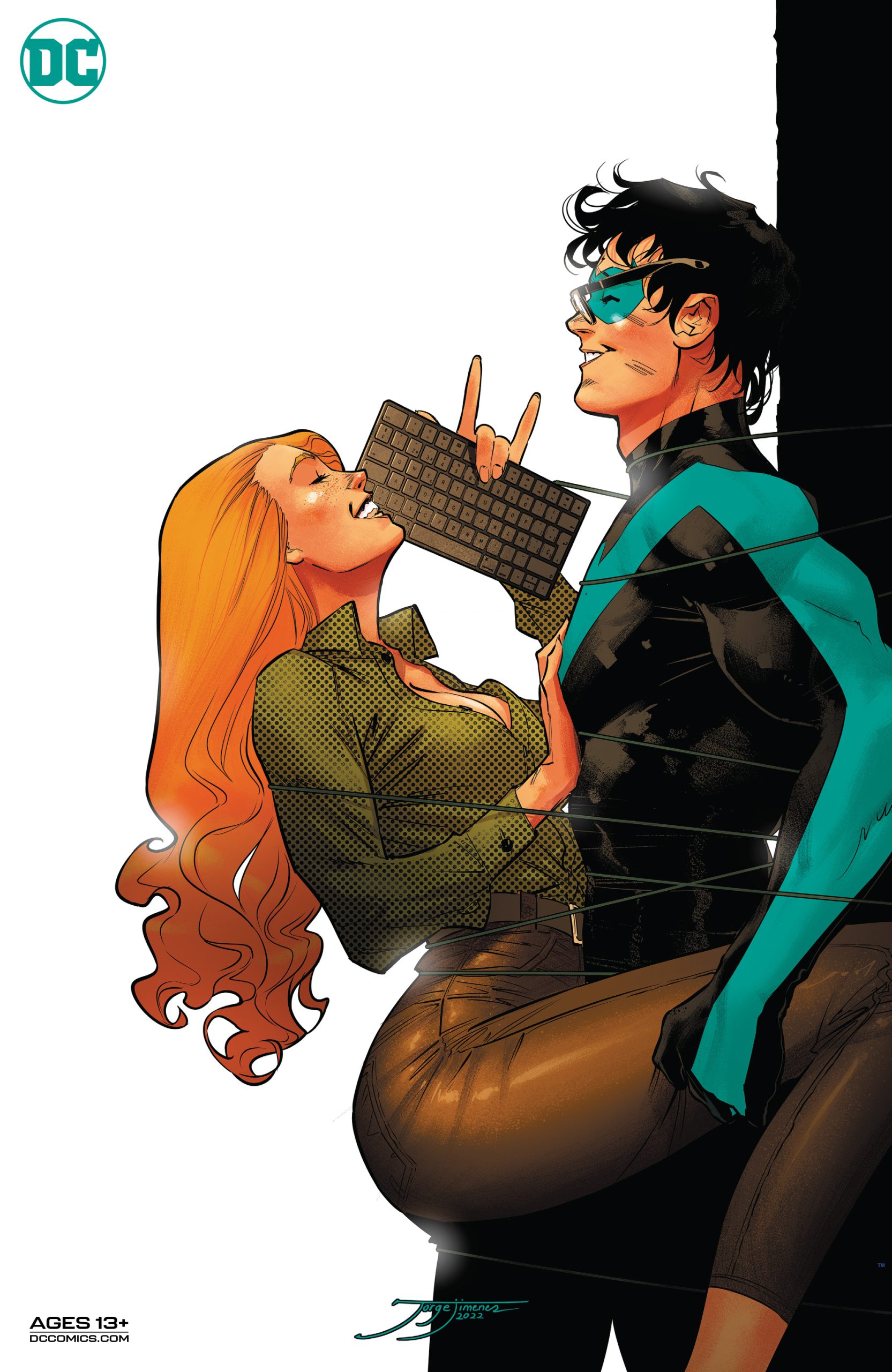 Though we’re just a couple months into 2023, it’s not hard to imagine that Nightwing #100 is the single best issue of the year.  It’s that good.  It’s possible that this creative team may top themselves in the following eleven months, but this entry can easily win that prize.  This has it all for Nightwing fans, and it also feels essential to the DC Universe.  It demonstrates why Dick is so important to the DC Universe both inside continuity and for fans.  It works on both levels and it brings all the emotion possible.