INFINITE CRISIS #7 (Dan Abnett, Javier Garrón) is all about putting our heroes in some real danger. Whether or not that danger is completely founded I’ll get to later, but first I want to take a minute to talk about INFINITE CRISIS: THE VIDEOGAME. I’ve only spent a few hours with the game so far and I haven’t exactly “played” a full round yet, but that’s fine: this isn’t about to descend into games journalism for the people that are here to read about comics.

The Supergirl that’s going to be featured in INFINITE CRISIS: THE VIDEOGAME but is yet another transplant from The New 52. I think this a mark against poor direction of that game specifically, because we already have the two most important characters from The New 52 – Batman and Superman, heavily feature in the videogame. What I find most damning about Supergirl being featured in INFINITE CRISIS: The Videogame is that she’s a DC character who hasn’t had a whole lot of super-popular Elseworlds versions, and INFINITE CRISIS could be a way for her to get some interesting takes on her character. So out of the gate; doing the ‘normal’ Kara Zor-El is the least interesting way to execute the characters appearance.

Oh, there’s also the fact that Supergirl hasn’t even yet been mentioned in INFINITE CRISIS the comic. Early in when I started picking up these issues every week to review, I was really hoping there would be some cool cross promotion. I realize it would have been difficult to put her in last weeks issue which rolled out on the 23rd, with her announcement only coming as early as the 18th, would’ve been difficult. If INFINITE CRISIS wants to have anything going for it, maybe should not only be using the pages to announce new characters for the videogame, but also giving readers a taste of what the characters can  do in the game. When it comes to both of those fronts, INFINITE CRISIS hasn’t been very successful.

Javier Garrón’s art style works great with INFINITE CRISIS. His art has just the right amount of bounciness that even some of the characters with needlessly overcomplicated designs pop out of

the page just right. What I mean by ‘bounciness’ is a focus on organic shapes versus inorganic ones. For an example, juxtapose Javier Garrón’s Batman against the way Greg Capullo draws him and you’ll see what I’m talking about. He especially makes Atomic Wonder Woman’s almost Runaways-era Joan Jett pop right off the page. I kept trying to picture who he might have used as a facial reference for her in this issue and a young Jane Fonda comes to mind. I would read the hell out of the adventures of post apocalyptic punk Wonder Woman, let me tell you. Can we get someone on THAT series, DC?

We’ve finally gotten to the part I thought INFINITE CRISIS was going to do more of sooner. in INFINITE CRISIS $7 we get a vision of the post-apocalyptic desert world that Atomic Wonder Woman comes from, and it’s not a pretty sight. Dan Abnett is even kind enough to give us a hideous lobster-mutant version of Bane to be introduced at the end of the issue. I hope every villain from the Atomic Universe is as lumpy and gross looking as The Two Faced, I can’t honestly think of a better direction for a lot of these villains.

INFINITE CRISIS #7 is appropriately building up to the real first fight that anyone is going to see in the pages of INFINITE CRISIS. There’s even a real feeling of dread when we see the burned out remains of Gotham City leading to a panicked Gaslight Catwoman to try and flee in fear. Why, then, does the moment not feel appropriately threatening? The Two Faced has a weapon of cosmic level power in his hands, so putting such a heavy-hitter filled group like our little ragtag band of miscreants up against what is essentially a seven foot tall crustacean addicted to drugs feels a little underhanded.

While Garrón’s great at making his character work pop off the page, I don’t feel quite the same way towards his backgrounds. With The Burn there was a real chance to depict a hellish nightmare of a place, but instead it’s a ton of grey buildings stacked side

by side and kind of tilted. For a place that looks like a cross between a gothic cathedral and old Hell’s Kitchen in every panel in the regular DC Universe, why does post apocalyptic Gotham look incredibly uniform for a ruined city?

Here’s another good question: The Two Faced tells Lobster Bane to gather his army of mutants, but everybody on the panel looks completely normal. They don’t even look mutant like The Dark Knight Returns mutants, they literally look like regular dudes wearing a little too much black leather for living in a giant crater. Why is Bane the only giant lobster? Who wouldn’t pay three dollars a week to read about apocalypse Justice League fighting an army of lobster men in the desert?

INFINITE CRISIS #7 is the best parts of Mad Max and a Lobster dinner. Or maybe the dinner is going to come next issue, when our team wipes the floor with Atomic Bane. You can’t have a mainstream superhero book where the team is completely ineffective unless you were writing THE RUNAWAYS during its first year. I want to see INFINITE CRISIS become more of a counterpart to the videogame tie-in. The videogame is very much all about your heroes getting to cut loose a little bit, so why not translate that type of action over to the page?

Hi! I'm Sam Kittrel. I write for my personal projects over here at http://skelesam.blogspot.com and I mainly write for DCNews on the side. My favorite comics currently are Moon Knight by Declan Shalvey and Warren Ellis & Hawkeye by Matt Fraction and David Aja 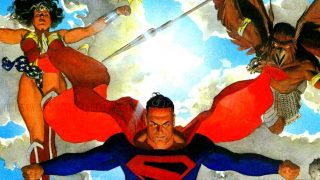 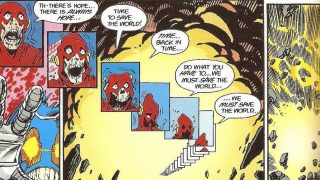