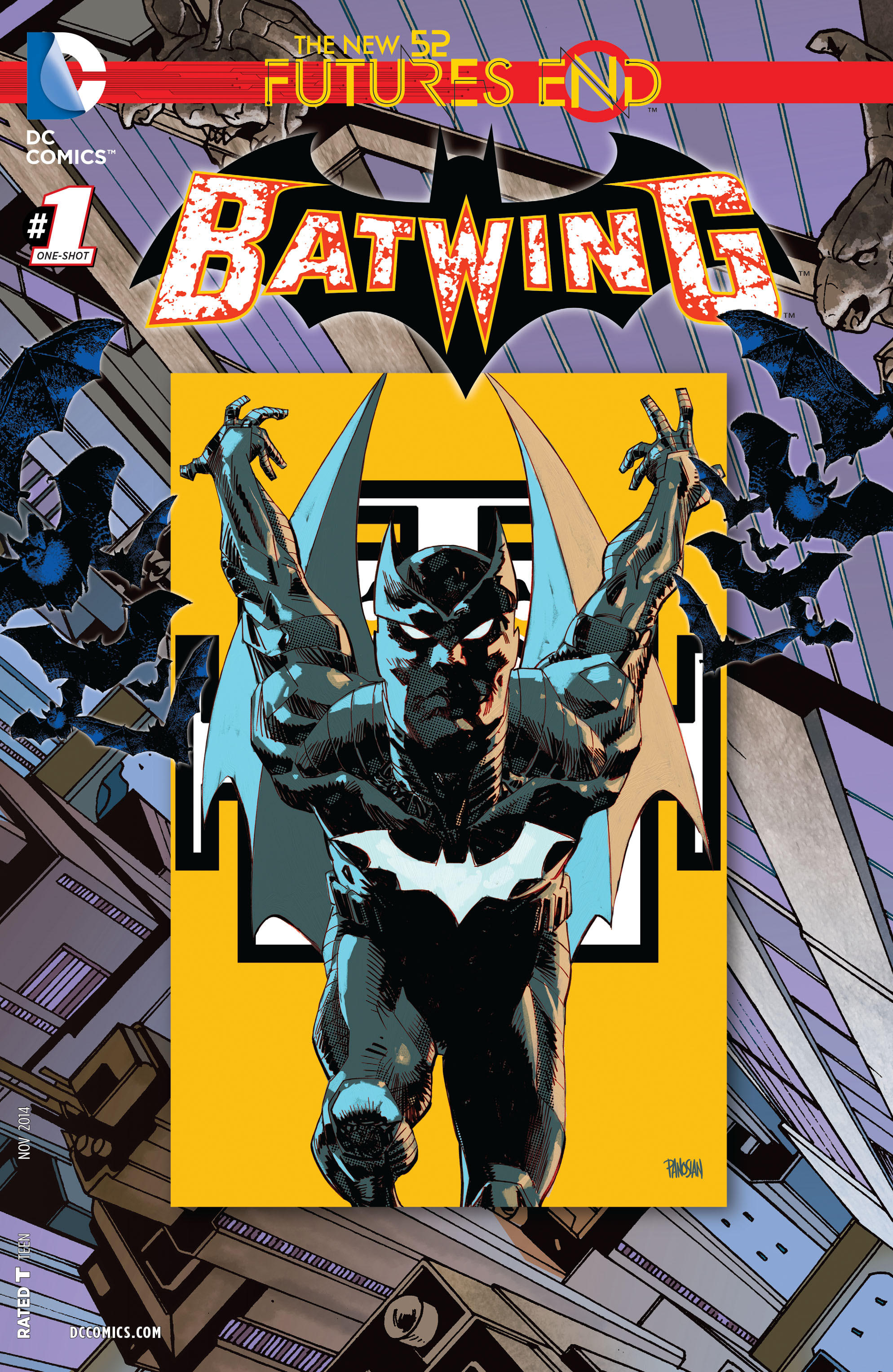 BATWING: FUTURES END #1 by Jimmy Palmiotti and Justin Gray with pencils by Eduardo Pansica, inks by Julio Ferreira and JP Mayer, and colors by Chris Sotomayor is a reminder to never give up on a good comic.

I’m going to come clean. As much as I loved the run leading up to this, I wasn’t looking forward to this at all. It’s a tie-in gimmick issue to an event I’m not following, and the solicit made it sound like it was going to be just a grimdark tie-in that was going to take the lead character in a direction that didn’t seem to follow from where he was at in the series. Shame on me for not having faith in the same creative team.

The issue started out how I was afraid it would, but halfway through it became what I wanted it to be. Where the final issue of the main series was a wonderful statement on why the series was good, this quickly and succinctly goes about wrapping up the lingering plot threads of the series, thematically and story-wise. It’s really impressive how much it crams in there and ends up being an excellent finale for the series. The issue also keeps one step firmly rooted in BATMAN INCORPORATED. Early on there is a meeting of colorful international villains. I recognized some from earlier in the run, but I didn’t read BATMAN INC, so I didn’t know if they were from there or new characters. I Googled them and found some were from Morrison’s run, but many didn’t turn up any results. I took it to be a look into what we could have seen if BATWING had continued. The issue mentions just enough about Batwing’s current life that it ends up doing a marvelous job of presenting as if the series had continued. Nothing seems constructed. It all feels like a natural progression from what was going on in the series.

And that collection of villains I mentioned sure is wonderful. My favorite being Father Gunn, a crime boss who has a gun for a face and seems to only be able to communicate by yelling about murder and destruction. Then of course the members of Batman Incorporated, who haven’t been in the series up to this point, show up. I’m only passingly familiar with most of them and not at all familiar with some, but they are a fun group of characters, so the issue ends up being filled with great characters, but manages to not make it at all gratuitous.

It’s hard to find something bad to say about this issue. I don’t have any complaints, so I’ll use this section to talk about something that was merely competent. The art work and storytelling here was fine, don’t get me wrong. However, this issue has so much to do and so much to fit in, there’s not a whole lot of room for the artists to stretch their proverbial legs. If you’re looking for something more than basic panel layouts and basic superhero burly brawls where a single big punch or kick for each pair of combatants is the modus operandi, you’re not going to find it here. Once again, I’m in no way saying the art was bad. It just necessarily had to take a backseat to let the writers cram in all the story they wanted to tell.

In my reviews for this site, I’ve talked a lot about comics that are content to be merely competent, standard cape comics, and I’ve come to realize that that is a standard that doesn’t quite do it for me anymore. This issue and the run the preceding it are a great example of everything a standard modern cape comic can be. It doesn’t do anything ground breaking, but it does do almost everything right and at a very high level of quality. The DC line is going to suffer from the gap this book leaves. Thank you Jimmy Palmiotti, Justin Gray, Eduardo Pansica, and everybody else who has worked on this title. It will be missed.