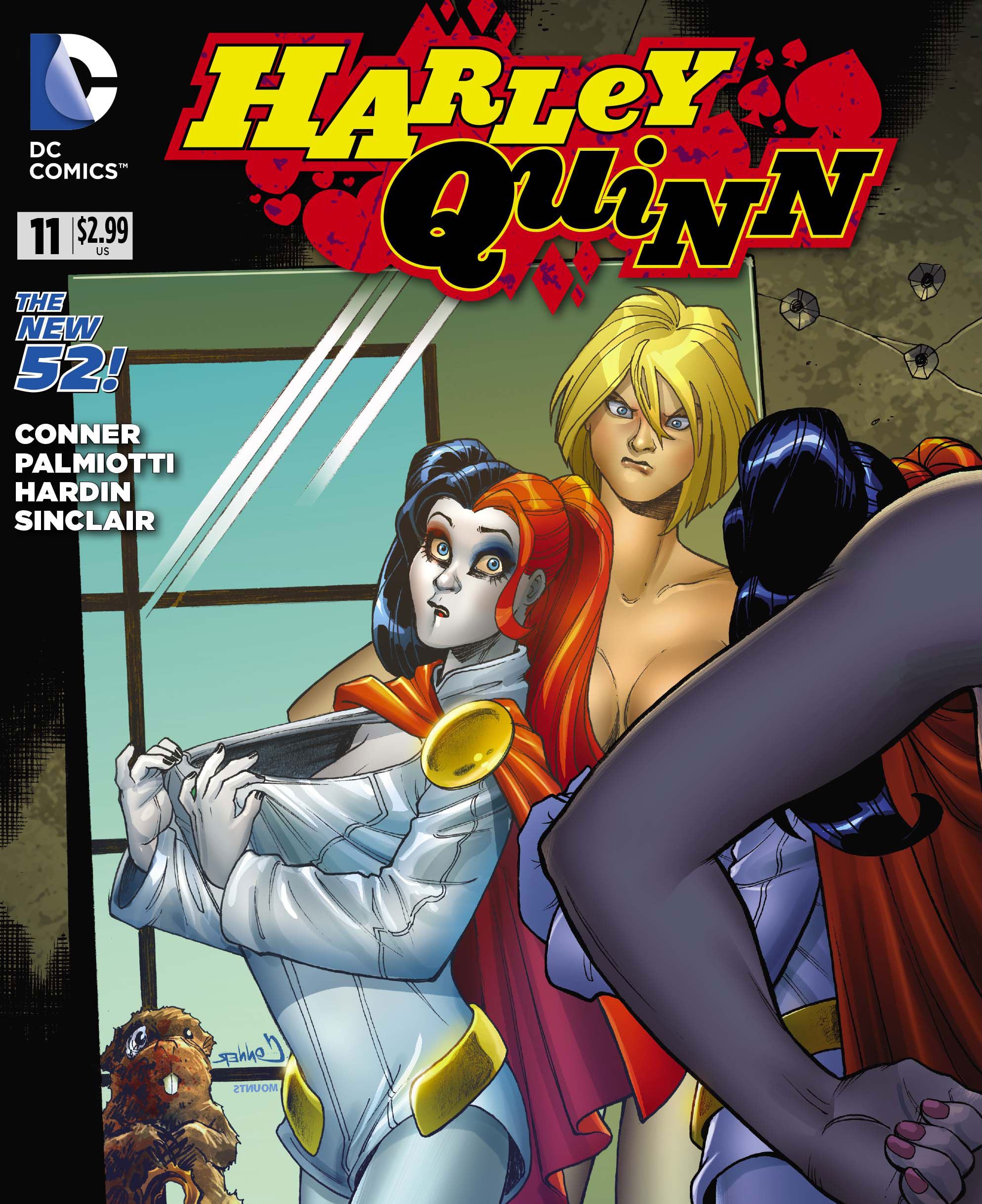 The hilarious scenarios just keep getting crazier in Harley Quinn as Power Girl joins her team. The blonde bombshell has been struck with a moment of amnesia as Harley decides to play with her new mammoth sized toy and creates the ultimately stylish crime fighting duo.

I cannot stop laughing each time I read about what mischief Harley gets herself into. Jimmy Palmiotti and Amanda Conner continue to make magic as the big PG is thrown into Harley’s world. Amanda Conner has a fondness for the Power Girl so it’s no surprise she has teamed up this unlikely couple of ladies to have some fun with. I think the pairing, though unconventional, is such an epic twist on Harley’s personality. All she wants to do is have fun with someone, superhero or supervillain as long as she is occupied, that’s all that matters. It was cute to see her having a softer side, to see that she is capable of having a friend and really caring about Power Girl. Plus the shopping gags were a total stroke of genius laying on the stereotypical endowments of the female superhero.

Chad Hardin does wonders with his art and I love the fact that everyone has their own theme in this comic. It’s so color contrasted thanks to Alex Sinclair’s balance of hues which really compliment each scene. I also loved how Harley’s colors seem to seep into everything she touches almost like she can’t help splashing a bit of herself around the town. Gives a whole new meaning to painting to the town red….. and black. The artwork once again speaks for itself, really emphasizing the female form and highlighting Power Girl’s larger assets whenever it can. That only makes the comics point more humorous and without these tiny touches the comic would be losing its best punch line.

Nothing beats a funny story and I have been waiting for this one since Power Girl dropped into Harley’s boardwalk. It was better than I had expected with the twist of Power Girl losing her memory, Harley covered the scenario up cleverly and turned everything around to her advantage. I had not seen this story coming and it was worth waiting for almost three months to get it. Nothing beats a naked Power Girl strutting around in front of a lunatic wannabe supervillain turned superhero. It was also cool to see Power Girl drawn in Harley’s cartoonish style of art, it gave her a completely different vibe but didn’t detract from the original character at all. Even the brief hint towards Power Girl being the incarnation of Supergirl had me smiling at how well she was treated in the issue.

This is the hardest part of this comic, it has so few flaws every week expect for the fact that we have to wait another month before getting the next issue! The only small complaint, if you call it that, I had with this week’s issue was the start. Having the Madame’s son come home and randomly give Harley a hand bringing in Power Girl seemed a little abstract to the story but I have a feeling that we haven’t seen the last of him yet.

So as the new duo take up the crime fighting life, Harley Quinn continues with her new partner Power Girl. A villain fighting villains for fun is strange enough but to see one of the strongest superheroes doing the same just makes for epic story, so stay tuned for the girl’s next wacky adventure together.