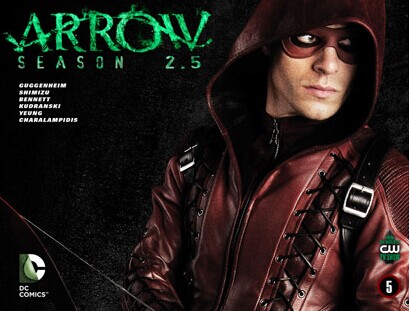 This week on Arrow Season 2.5, we get to see what progress looks like!  Laurel discovers that the arrested man was connected to Brother Blood, which gets Team Arrow worried, because Sebastian is supposedly dead.  With Roy still under sedation from his injuries (he better be getting that new suit when he wakes up), Oliver goes alone to confront Blood at his “church.”  Laurel tells Diggle to go find him after some time without contact.  As the worshippers of Blood attack Oliver, Diggle gets attacked, and his lack of a mask finally comes back to bite him.

I said it last time, but I am glad we are addressing the whole maskless thing.  I also like that they are playing up the whole Brother Blood as a mantle thing here.  Slade alluded to it on the show itself, and the comics have had multiple Brother Bloods, so it is nice to see that concept really at play here.  The page devoted to Thea and Malcolm is well done and fills in another blank when it comes to her training.

The Suicide Squad backup is great.  Can we just get this in a separate comic so they can stop teasing us?  I know that wouldn’t work, as they really are relying on the Arrow name to sell the backup story, but it is currently really interesting.

I usually lay off the art here, but Thea looks way too much like Laurel here.  Their designs are annoyingly similar.  Also I wish they could keep Laurel characterized as a strong female, but every time they try, they end up finishing the scene with her worried or concerned about Oliver.  She really can stand on her own as a character.

The jump to Thea and Malcolm is a reminder of just how much this story needs its space.  Every time we jump characters, it feels tedious more than suspenseful.  The cast is too large for them to check on everyone each issue, jumping works with 40 some minutes of television.  It does not work with roughly 20 digital pages.

Arrow Season 2.5 is starting to hit its stride, story-wise.  But, the balancing act it is trying to pull with the large cast in such a small space will continue to hinder strong storytelling.