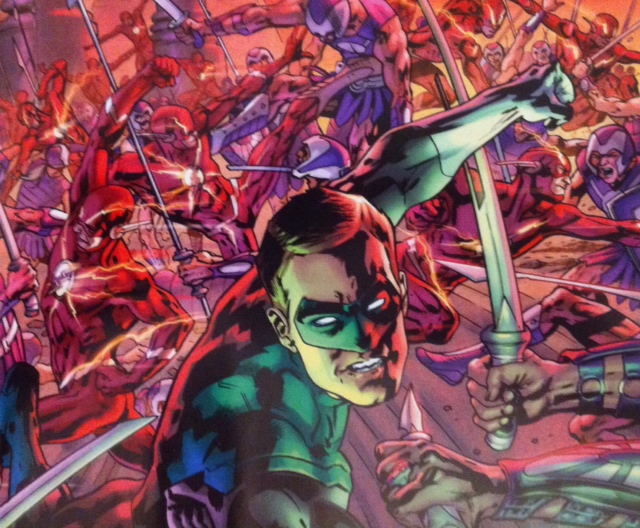 With large scale stories it can sometimes be difficult to keep the carrot in front of the reader as the story pops around to different locales and characters. With issue #3 of Justice League of America, Hitch successfully keeps the carrot in front of the reader while expanding the narrative to an even larger scope, while at the same time providing a reality check with the average citizen of the DCU.

The issue opens with Hal and Barry landing rather roughly in the middle of a battle between two armies on an unknown planet. The gravity is stronger than Earth’s (clue) and as Barry and Hal attempt to get themselves up and going, Barry succeeds a little too well only to disappear again. We get a quick two page reminder that Diana is on the remains of Olympus only to learn that…she’s stuck and the gods are gone. Hmm.
Meanwhile, back on Earth, Rao visits a boy and a Priest who are collecting for a charity. Rao arrives are the two are lamenting the sparse donations they have collected so far. Rao then answers the boy’s prayer as he terraforms the African desert and provides all the natural resources and topples all the dictatorships to effectively end famine.

The scene shifts to Batman and Superman as Batman confronts Superman on his inability to question the veracity of Rao’s claim and his motivations, essentially accusing Superman of handing the planet over to Rao. The issue wraps us with Hal being taken to the leader of one of the forces on the unknown planet presumably as a guest having been recognizes as a Green Lantern. No spoilers. While it would be easy to have left the reader hanging on Barry’s fate for another issue it works much better discovering where he ended up. Remember the beginning of the first issue when the think tank is pulling in Supermen from multiple timelines? Well, this time they’ve hooked a Flash.

The story continues to be well-paced and the inclusion of the everyman in the Priest and little boy bring home the effect that Rao is having on the general populace. It is welcome both structurally in the story as well as a story element itself. Hal and Barry’s situations both do a nice job of expanding the story, giving depth to the scenario. Batman and Superman’s characterizations as well as their dynamic are handled deftly and accurately. One of them will be right, the other wrong.

Aquaman was conspicuously absent from this issue, hopefully he will return in the next chapter to play a role. So far this series is making a great argument for kicking Cyborg out of the League. He was not missed at all this issue.

Another strong issue with the right blend of plot, character and surprises. No clear missteps yet as this arc moves forward continuing to entertain on the epic scale.  It’s a fun read that isn’t inaccessible to a new reader. 4 1/2