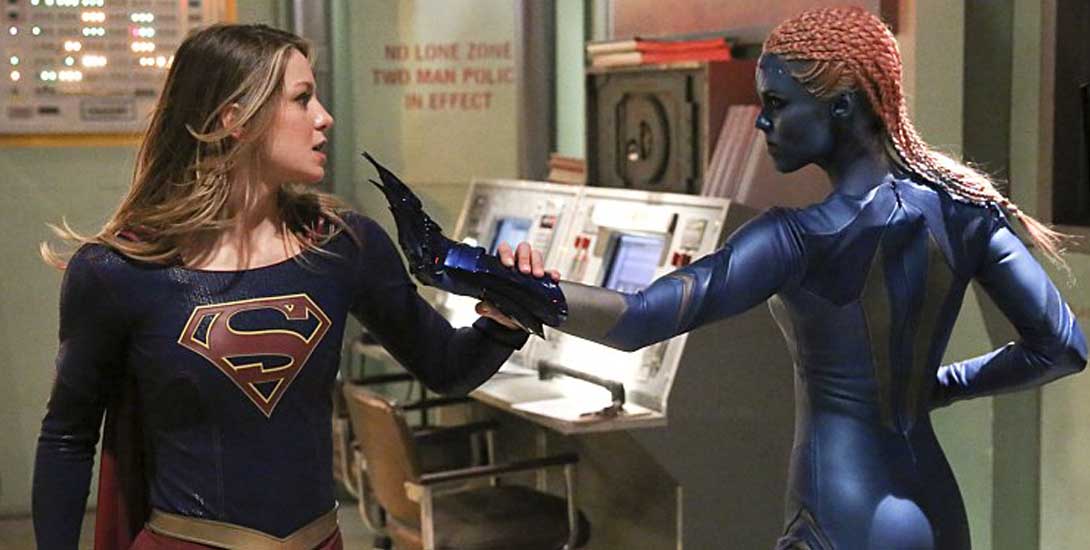 Kara is still dealing with problems in her day job at CatCo and the rival assistant, but a mysterious package throws everything into disarray.  A hacker has revealed the names of people signed up for a cheating dating site, but there is so much more at stake than ruined reputations or marriages.  The hacker is actually the villain Indigo, one of the Brainiacs that was imprisoned at Fort Rozz and now she has plans for Earth.

The story starts out simple enough with the hacking plot revealed.  It’s interesting to have Cat Grant and CatCo take the high road and choose not to publish the information.  They get a few moments discussing the relevance of this kind of “news” before the plot gets going.

Supergirl and the DEO are still on the outs.  Kara is still unsure of how to deal with Hank, and Alex is caught in the middle.  Alex gets some great moments as she is torn between her sister, Hank, and the truth.  The problems between them force both Supergirl and the DEO to get creative and explore new options.  This puts more and more people trapped in the middle between Hank and Kara.

Indigo first reveals herself as a human hacker who is not too pleased about the lack of information being released.  It’s a great twist to have her first revealed as human looking before the truth is revealed.  By the time anyone realizes what’s really going on, it’s almost too late to stop it.

The real highlight of the episode for me was when Jimmy takes Kara to Superman’s Fortress of Solitude.  In one scene we get so many classic Superman comic moments like the key made of dense dwarf star material, the robot helpers, and several fun comic easter eggs that it had me grinning the whole time.

Indigo makes a good villain, but she is dispatched somewhat easily.  It’s straight out of Independence Day as she is stopped by a human computer virus that is uploaded to her.  I doubt this is the last we have seen of her though, so maybe she can get redeemed in her next appearance.

I’m glad that the rift between Hank and Kara is resolved, but it does make them both seem selfish that they are not willing to put any differences aside and work together to stop this major threat.  At the end of the episode, the truth is revealed and Kara seems much more forgiving to Alex than she was to Hank.  Maybe it’s just that Alex told the full truth about what happened with Alura, Hank never seemed to say much more than he killed her.

A great episode that brings up a lot of fun, classic comic elements.  Everything at the Fortress of Solitude was fantastic, and you can’t beat having a hero chase down the rocket as it speeds towards the city.  The characters all grew with Alex and Winn getting some great moments, but the interpersonal conflicts felt more childish especially in the face of such a major threat.