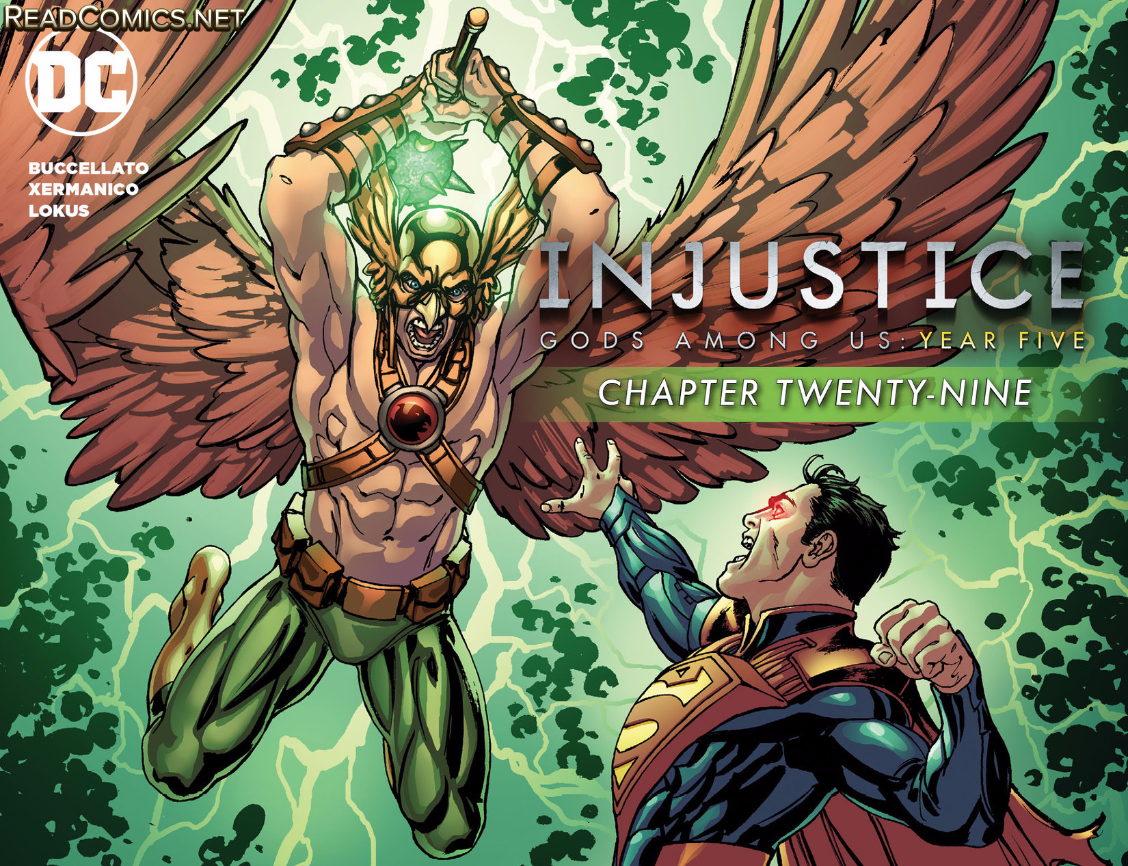 Due to the actions of Regime wary Flash, Superman starts to question the loyalty of his allies. Seeking to recruit more, the hero now turned dictator heads to Kahndaq to recruit Black Adam–but Black Adam isn’t one to be recruited so easily! And what does Batman’s newest plan to defeat Superman have to do with an off world Hawkman?

“Thrones”, the latest issue of Injustice written by Brian Buccellato and penciled by Xermanico shows us a darker Superman than we’ve ever seen before. Now five years into his rule, Superman has gone from the world’s greatest hero–to its greatest dictator. Buccellato does a remarkable job showcasing this as you can see in Superman’s actions and in his presence that he sees himself as absolute ruler of Earth. In one panel he threatens to kill Cyborg for questioning him, while in another he gives orders to the rest of the League without even asking their opinions. Xermanico compliments this further by showing great artwork to the emotional strain you see Superman puts himself through. Although I absolutely hate this dictator version of Superman– I still feel sorry for him because of his loss of Lois and his child. That single loss is what has become the driving force of Superman’s rule since and he refuses to feel that loss again. The battle between Superman and Black Adam was awesome and Xermanico does a great job of penciling it. Superman reminds Black Adam of their past conflicts but Black Adam doesn’t care– he refuses to bow before Superman! In these few panels I’m reminded why I’m such a fan of Black Adam and why he’s such a badass! Xermanico details their fight perfectly and shows us exactly how dangerous a dictator Superman actually is.

I can actually say that I have NO negatives about this issue! Crazy ain’t it?! Buccellato does a great job on the story from beginning to finish and the relationships that unfold here are great. Batman and Batgirl, Lantern and Sinestro, and Black Adam and Superman are all told well and I really can’t find any faults here. I love how Injustice uses Superman’s failure as major consequence and how relationships are made and broken because of it. Iconic characters have seen real shakeups in this series and I’m excited to see how all of it plays out in its ending.

“Thrones” from start to finish kept me interested. Hands down I think Injustice is one of the best comic book series ever written by DC. Although it’s not canon from the first issue to now has been a giant emotional rollercoaster. Buccellato does a wonderful job of showing us just how thin the line between hero and villain is. I think the greatest spin of it all is the fact that it’s Superman that’s the villain here. I’ve been reading this series since it’s launch and I’ve seen Superman go from unshakable hero, to unquestionable dictator and it’s a great ride. Check out Injustice #29!!! Great read!!!