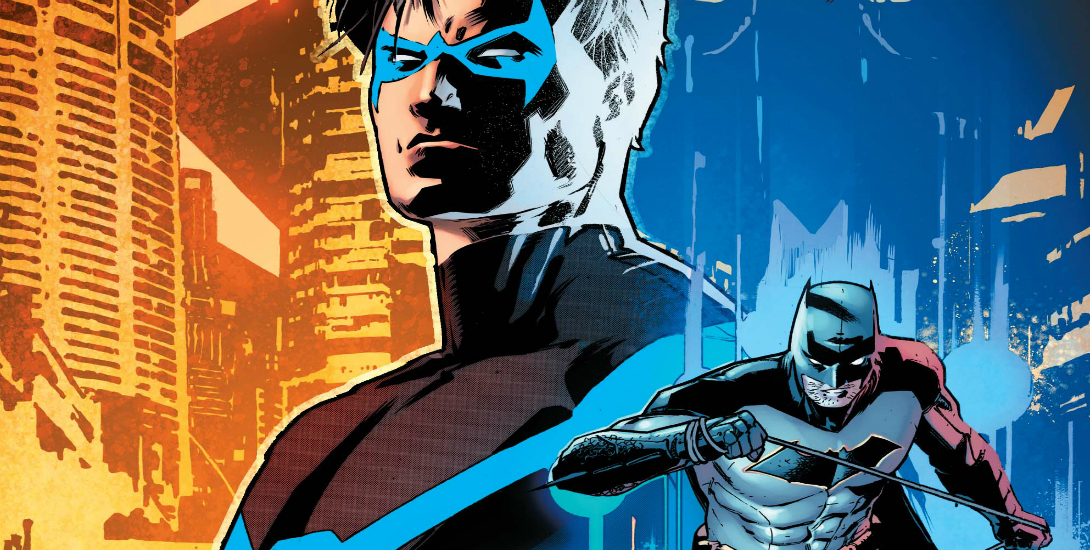 With Dick Grayson, more so than many other costumed characters, the actual quality of his character portrayal seems to matter more. Dick is unique. In Nightwing #1 Dick gets another start which is as different from either of the previous two ongoing Nightwing series or the recently wrapped Grayson. As such it’s not a surprise to see Bruce, Damian and Barbara all make an appearance in this issue.

As this issue opens, a mysterious grave robber is stopped and robbed herself by an even more enigmatic figure. It’s all tied into the Parliament of Owls we quickly learn and where we see Dick Grayson shortly- after a fun introduction highlighting his acrobatic body and outlook on life. Dick seems to always have his head on straight and it comes through in this sequence that he knows who he is, where he’s been and where he’s going.

So far the Parliament isn’t happy with the way Dick is fulfilling his part of their covenant. Their plan is to partner him with a fellow named Raptor. Before Dick takes the next step in his plan to infiltrate the Parliament, he heads back to Gotham to check in on friends. He gets a bit of a cold shoulder from Batman who seems to be going out of his way to let Dick be his own man. After a quick visit with Barbara and promise to return bearing gifts, Dick makes his way to Russia where he runs an errand for the Parliament and finally meets Raptor. It’s a classic first meeting of supposed allies, albeit not exactly what fans of Nightwing would want to see. Raptor intends to out Batman Batman in his approach to retraining Dick Grayson.

As always, Seeley is able to maintain the focus on the portrayal of Dick’s character and realizes the importance of his relationships with the Bat-family. He could very easily have shunted Dick back off to Europe, but stopping in at the Cave and to see Barbara emphasizes the importance of these relationships and adds a little something more to the emotional line in the plot. Seeing Barbara and Dick be a little flirtatious adds hope to the notion that these two may soon be an item once again. This was a very nice interaction between the two, I hope it’s not just a tease. At the very least it demonstrates that Dick Grayson is a real person with real relationships.

Perhaps the undercover thing is wearing a bit thin for Dick. This story line at first seems a little too similar to Dick’s recent assignment with Spyral. It’s worth a shot, though. While Dick has always had a little cockiness, he should be portrayed as being prepared. It seemed a bit out of character that Raptor was able to get the best of him. This seems to point towards some inconsistent depiction of Dick’s skills. He seemed eminently competent throughout Batman and Robin Eternal and Grayson.

Verdict
A winner in characterization, Nightwing #1 overcomes the drawbacks of the reused undercover plot and an unprepared Dick Grayson. Dick Grayson continues to be one of the most likeable and accessible characters through his appealing disposition and grounded relationships.