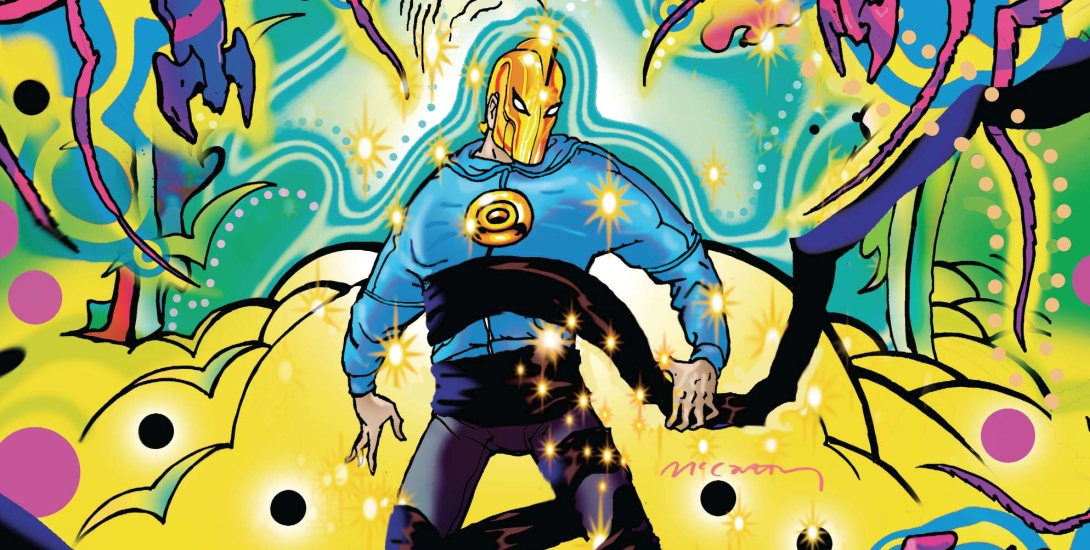 Summary
This final issue picks up with Doctor Fate (Khalid Nassour) having just been transported to what appears to be ancient Egypt. Khalid escapes from the thread ensnaring him and enters a pyramid, which appears to be a tomb. The tomb is not for a dead Pharaoh, however, but rather a sleeping god – Thoth, god of wisdom and source of Doctor Fate’s power.

Thoth awakens and asks if Khalid will be loyal to him. Khalid is worried that Thoth wants him to forsake Allah, but Nabu assures Khalid that Thoth merely wants Khalid to accept wisdom as his guide. Thoth informs Khalid that Nabu is merely his servant and knows little more than Khalid.

Thoth goes on to tell Khalid that although Clothorus claims to control Fate, “In the end, the fate of mortals is in your own hands. You are given free choice of your destinies, and only based on those choices can the immortals intervene.”

Thoth then heals Khalid and bids Khalid to likewise heal the world, or otherwise he may fall and the world will fall with him into darkness. Khalid doesn’t quite follow this – all he wants is to save his friend Akila. Thoth sends Khalid back to Clothorus, giving him the “blessings of Thoth” to help him.

Khalid uses a spell taught to him by his uncle Kent (the original Doctor Fate) that allows him to see that Clothorus’ drones aren’t really controlling people’s fates, but are actually parasites killing people and feeding on their souls. Khalid tries to kill all the drones, but is overwhelmed.

Khalid regains consciousness to find himself again facing Clothorus. Khalid finds himself bound as Clothorus puts him into her forge to burn.

Unable to get out of his bonds, Khalid instead goes inside, becoming one with the magic and transforming into a thread of Fate himself. Khalid then ends Clothorus’ hold over human destines and banishes her from Earth.

Khalid then finds himself back in Brooklyn. What appears to be one of Clothorus’ drones and a small hive. To be safe, Khalid kills the drone and smashes the hive.

Positives
This time around, this actually is the final issue, and it acts as a fitting end to the series. Khalid is shown to have truly grown into the role of Doctor Fate. He has earned the approval and blessing of Thoth, the source of his power, and he has thwarted a major immortal magical being.

But it also shows that there is still room for him to grow. He admits that he doesn’t entirely understand the advice of Thoth or the riddles of the Sphinx, but he still manages to find the correct way to wield the power of Fate to defeat Clothorus. Khalid is not at the end of his journey, although he has made major strides over the course of the series.

Negatives
The drawback with this issue, is how much it leaves unanswered, considering that it’s the end of the series. We have seen a Doctor Fate in Blue Beetle, whose costume appears much closer to Kent Nelson’s rather than Khalid’s. Also, there are hints that the Justice Society is returning in the Rebirth storyline. This begs the obvious question: is this Doctor Fate Kent or Khalid? And if it’s Kent, does that mean Khalid is retiring from the role? Khalid does express a wish in this issue that he could return to his old, mundane life. Hopefully, these questions will be addressed in the pages of Blue Beetle.

Verdict
This is a solid finale to the current adventures of Khalid Nassour as Doctor Fate, but it leaves us with a lot of questions that hopefully will be answered soon elsewhere in the DC Universe.