5 DC cartoons that ended too soon 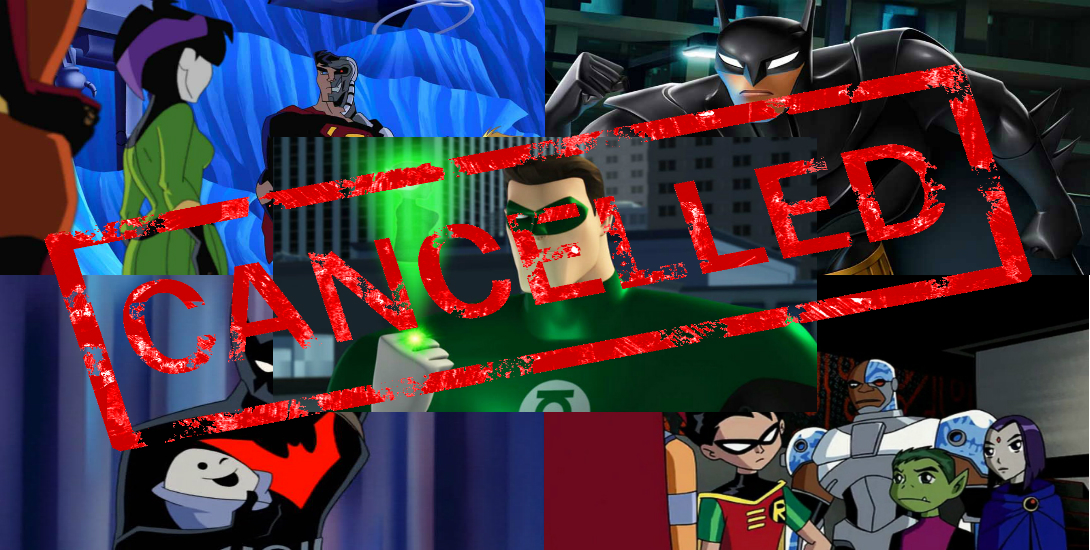 It’s been a bit more than three years since the acclaimed animated series, Young Justice, was suddenly cancelled by Cartoon Network. The channel was looking for more kid-friendly programming in the same vein of shows such as Adventure Time, and viewers started getting slammed by “enriching” programs like The Amazing World of Gumball, Clarence, and, possibly the worst offender for brain-numbing entertainment, Uncle Grandpa. When fans of Young Justice were faced with the cancellation of the series with no resolution, they took up a cause on the Internet that lasted three long years.

Three years of watching and rewatching the show on Netflix to increase its popularity. Three years of tweeting, emailing, and petitioning WB Animation, Netflix, and Cartoon Network to bring the show back. Three years of cosplaying, fan art, and fan fiction to show that a third season is not just possible, but necessary. Fans of the show really wanted Cartoon Network to see the treasure they gave up, and wanted to see its triumphant return to television. And in November of 2016, all their hard work finally paid off. Warner Bros. Animation announced there would be a third season, and production is underway. Now we are just waiting to find out where the show will end up. Will Cartoon Network bite the bullet and take a loss on its much-more-desired young male viewership by inviting back the audience demographics it originally condemned in favor of selling toys? Or will the third season land on Netflix, where fans can binge the whole series at once? Right now, it’s all up in the air.

Over the last quarter century, there have been almost countless superhero cartoon shows made for television. Some of them hit all the right marks to be successful — like Batman: The Animated Series — and some of them were absolutely horrific (I’m looking at YOU, Swamp Thing). But there were some shows that were taken out of production before they had a chance to hit their stride, or build their audience, or even before finishing a story arc.

We take a look back to remember five DC animated series that were cancelled before we were ready to say goodbye.

Only lasting 26 episodes between 2011-2013, this show was a victim of bad timing. It was riding the coat-tails of the critical and box office failure, Green Lantern, starring Ryan Reynolds. Most cartoons depend on the sales of toy lines to keep their show going. Because of the horrible taste Green Lantern left in everyone’s mouths, no one wanted the toys from the cartoon. This was a driving factor in the nixing of the show. But was the show itself really that bad?

The first CGI cartoon produced by Bruce Timm, Green Lantern: The Animated Series did not instantly mirror its silver screen counterpart and pit the Emerald Knight against Sinestro and the Yellow Lanterns. Instead, Timm and his team chose to pursue the other Lanterns on the emotional spectrum. In the first 13 episodes, it was all about Atrocitus and his raging Red Lanterns. During this time we meet other GLs and surprise allies like the Star Sapphires and Saint Walker of the Blue Lanterns of Hope. This arc ends with everyone working together to stop Atrocitus from invading the home planet of the Guardians, Oa.

The next one picks right up by introducing us to Guy Gardner, with whom Jordan is at odds almost instantly. They find a way to work together to fight the Manhunters, who are a recurring enemy throughout the arc, and Hal also faces a second, new threat: The Anti-Monitor. By the end of the arc, everything is wrapped up with a nice little bow. So why is this show on the list? Well, when the creators of the show were producing the episode, it was a season finale. At the time they were making it they probably didn’t know it would be the last episode they ever made. Then again, when the show wasn’t listed in the Cartoon Network spring and fall lineups for 2013, it wasn’t hard to figure out.

A show that was a bit off the beaten path of normal DC superhero shows, Legion showed us a world of DC that we’ve never seen before on television. With young heroes like Saturn Girl, Bouncing Boy, and Lightning Lad, this was not anything like Teen Titans or Justice League Unlimited. It features a young Clark Kent, being recruited by Saturn Girl and Brainiac 5 to travel to the future with them because they need his help to subdue the Fatal Five, who escaped from future-prison to wreak havoc on the future. During his first encounter with the Fatal Five, Clark disappears into the New Metropolis Superman Museum and steals a costume that fits him surprisingly well.

Like many other shows cancelled before resolution, this one leaves us on a cliffhanger. Superman is presumed dead, but then isn’t dead, and Brainiac 1.0, the main villain of the second arc, is defeated but slowly restores himself and makes this threat: “Evil does not die. It evolves.” And then…nothing. The CW retired the “Kids WB!” block of programming on Saturday mornings, and replaced it with shows produced by 4Kids Entertainment, which is responsible for the wildly popular Pokémon and Yu-Gi-Oh! franchises. This meant the end of shows like Tom & Jerry Tales, The Batman, and of course, Legion of Super Heroes.

Here’s a show that should have had fans up in arms when it was cancelled. Granted, producers took some creative license with characters and story, but this show was absolutely fantastic. We got to see Batman villains never before depicted on TV, animated or otherwise. Anarky, Professor Pyg, Tobias Whale, and Magpie were just some villains that we got to see Batman face, which added a whole new dynamic to the character that we’d never gotten to experience before. He had to find new and creative ways to defeat his adversaries, which made for very compelling storytelling. Not to mention that as the first season progressed, the stories got better and better.

The show ran into problems, however, when it was put on hiatus only 11 episodes in. With no real explanation, Cartoon Network pulled the show from future lineups, leading many to speculate that it was cancelled. What they did next with the show was absolutely bizarre. There were 15 episodes remaining in the first season. Cartoon Network decided to air them weekly in the Saturday night block, “Toonami,” at 3am.

After the initial run of Beware, there were no more runs scheduled for the show, no new episodes in production, and the network moved on from it as if the show had never even existed. To this day the best explanation we have is speculation, and there are currently no plans to revisit the show.

Now, I know what you’re thinking; this show got its finale in the form of Justice League Unlimited episode “Epilogue,” which featured an older Terry McGinnis breaking into Amanda Waller’s home to seek answers about the true nature of his relationship with Bruce Wayne. However, what you may not have known is that after the third season of Batman Beyond ended with “Unmasked,” an episode where Terry takes off his mask for a child and thus makes that child a target of Kobra, Kids WB! planned a fourth season after they got Justice League off the ground. As you may have noticed, it never happened.

Bruce Timm, producer and co-creator of Batman Beyond, stated that the way the show ended is what inspired him to create fantastic season finales for his future shows — you know, just in case. In “Epilogue,” there are a lot of subtle hints about things that have transpired in the Beyond universe between the end of the show and the events of “Epilogue,” including Terry’s unresolved relationships (ie, getting back together with Dana Tan, dealing with the Justice League, etc.). Timm, who wrote the episode, really tried hard to connect as much as he could from the original show to this episode, and the resolutions it presented left most viewers and fans of the original show satisfied.

But there are a lot of fans who still want more. There were plans for another Batman Beyond animated movie, but thanks to the dark tones of Batman Beyond: Return of the Joker, that never happened. But with the 2014 animated short featuring Batman and Bruce fighting off a swarm of Batman androids representing various periods in the Dark Knight’s history, the current Batman Beyond comic run as part of the “Rebirth” era of DC Comics, and fans constantly demanding a live-action Batman Beyond film, how long will it be before we finally start to get hints of the return of the Batman of the Future to the DCAU?

I am honestly surprised about this show making the list, and maybe that’s why it’s my choice for number one. Teen Titans premiered in 2003, and lasted five seasons until its end in 2006. Originally, the show was only supposed to go for four seasons before ending, but it became so popular that Cartoon Network added a fifth season. Now, you might be thinking, “Why is a cartoon that lasted five seasons ranked number one on a list of shows cancelled too soon?” And honestly, I don’t blame you. Five seasons is a great run, especially when it was supposed to end much sooner. But anyone who has watched the show to its bitter, unsatisfying end knows why. And for those who don’t, keep reading.

The final episode of the fifth season of Teen Titans, “Things Change,” opened up a slew of possibilities for a sixth season. Terra mysteriously returns with no memory of her previous experiences with the Titans. This episode also features the return of Slade. We never learn his true identity, and we never get an explanation for his return after Trigon’s defeat.

The problem with having a serial television show is that if it’s cancelled, the story is interrupted, it never gets finished, and fans are left unsatisfied. And that’s exactly what happened here. Later in 2006 we got Teen Titans: Trouble in Tokyo, but that largely ignored the plot points raised by the season five finale. As a result, that film has been rejected as a satisfying conclusion to the series, though let’s face it — with Teen Titans GO! still on the air with regular release of new episodes on Cartoon Network, that is probably the best we’re going to get.

Do you agree with our list? What animated DC shows would you like to see return to television?