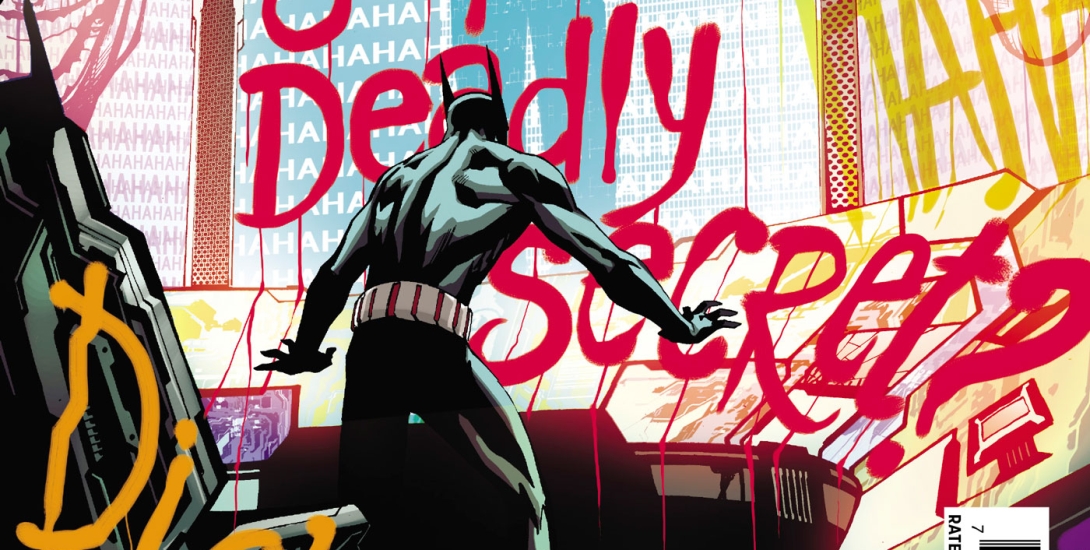 Summary
Terry’s infiltration of the Jokerz gang has been uncovered and now he and his ex-girlfriend Dana Tan have been hung upside outside the Jokerz headquarters to be executed.

While this is happening, Terry spots his brother Matt sneaking past the crowd of Jokerz and into the Jokerz’ hideout, heading for the roof.

Despite being tied securely, Terry manages to reach a knife concealed in his belt and cuts Dana and himself loose. Terry and Matt meet on the roof. After taking care of the Jokerz up there, Terry asks what Matt is doing there.

In response, Matt gives Terry the burden that he has brought: a new Batman suit. Unfortunately, Dana isn’t very happy to find out that Terry is Batman.

Terry is pleased to discover how much improved the new suit is as he fights off the crowd of Jokerz. However, one of them grabs Dana as a hostage, but Terry takes him out easily anyway.

Meanwhile, Terminal is tending to of the Joker’s body. One of the Jokerz enters to reveal that Batman has taken out the rest of the gang, so Terminal decides to flee.

Terminal flees with his faux-Joker, to the owner’s suite of a building owned by Bruce Wayne. Terry discovers that Terminal has fled, but Terminal’s computer reveals that Bruce is still alive and disguised as the Joker.

Positives
I really like the new costume. It’s still basically the classic Batman Beyond costume, but with some Kirby-esque detailing -and a lot of cool new tech. It will be interesting to see what other revelations about the new suit.

Also, it seems we are getting closer to the original Batman, Bruce Wayne, returning as Terry’s mentor. Now that Terry knows he’s alive, saving Bruce will be his top priority.

I am guessing that Matt is going to take on the role of Robin to Terry’s Batman. His hoodie in some panels very much resembles Damian Wayne’s Robin outfit. Terry may not approve, but maybe Bruce might design him a high-tech Robin costume.

Negatives
Last issue, I thought Dana might find out Terry’s identity, which is what happened. There are now a lot of people in on Terry’s secret identity: Dana, Matt, Max Gibson, Barbara Gordon, and Bruce of course. That makes for a pretty large number of people – nearly his entire supporting cast. However, Dana knowing will allow for an exploration of their relationship. Will they get back together, or will the years of secrecy and deception on Terry’s part keep them apart?

Verdict
As is typical with the Rebirth titles, we get a strong mix of the classic and the new in this issue. Terry has returned as Batman, but he has to contend with more people knowing his secret identity. Even the costume is a mix of old and new. So far, this seems to be a winning recipe for DC.