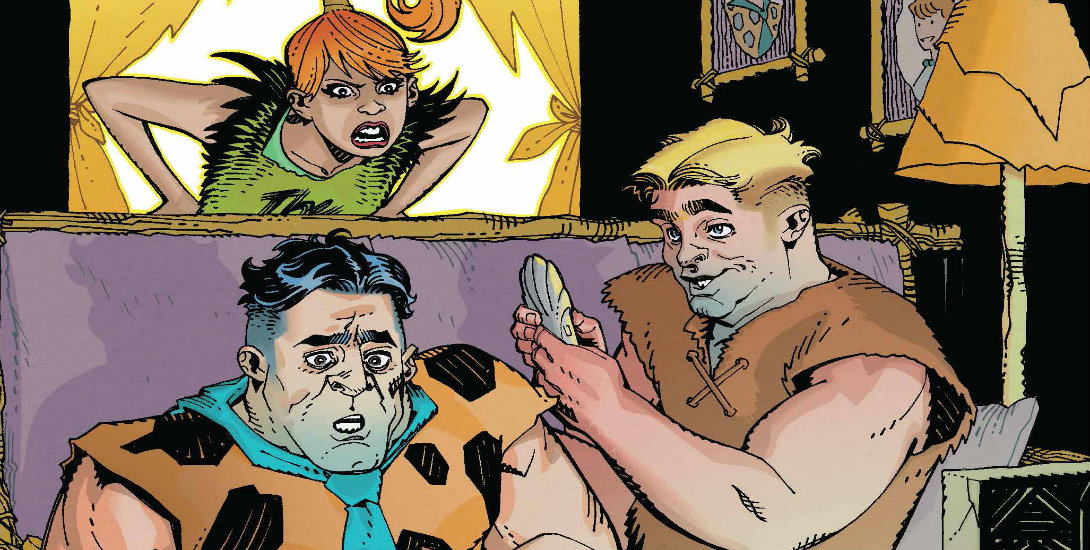 Positives
If you are tired of me proclaiming that Mark Russell is a satirical genius, do not read any further. If you want proof of his brilliance, please go forth.

This is why Mark Russell is a genius. Read on:

Honestly, I want to quote the entire book. Fred’s speech at the Clod rally: quotable. Wilma’s mother explaining why she knew Wilma had to run away: quotable.  Everything the econ professor says: OK you get the point. To satisfy my urge, I will throw one conversation in that is so funny.

Fred: “While your mom was gone, I sort of figured you were the woman of the house.”
Pebbles: “That is so sexist Dad.”
Fred: “I know.”

Okay, that is funny because it is true. In fact, this whole issue is spot on. Sexism, racism and all the “-isms” have one thing in common. White dudes. White dudes have been screwing up the world since it started. Mark Russell gets to remind us, that even from the beginning, white dudes screw things up because they can. “Men are the leisure class.” Holy crap. How freaking true.

Negatives
Once again. Nothing to report. I love this book. If you have not read this book, what is wrong with you?

Verdict
Mark Russell only has a few issues left on his run. Seriously, Gerald dammit, get reading. Tell a friend. Tell ten friends. Petition DC to turn this into a new animated series, if and only if it is written by Mark Russell and drawn perfectly by Steve Pugh.