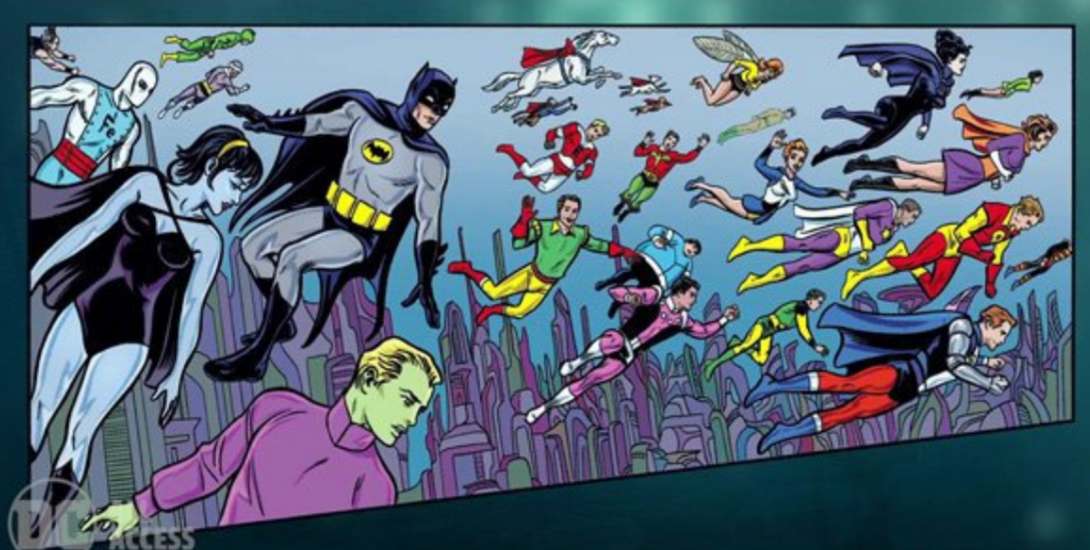 One of the DC’s most enduring creations, older than all of its Silver Age heroes, is the Legion of Super-Heroes. Yet the super-teens of the far-flung future have not had a regular home at the company since cancellation of their New 52 title at #23 in August 2013. The four-year gap for the team — famous for a five-year gap in storytelling back in 1989, between the third and fourth volumes of its titular title — now eclipses the last time the Legion was left in limbo, between the 1970 cancellation of their back-up series in Action Comics and their 1973 return to regular series status with Superboy #197.

But at least in that down-time between regular runs, the Legion popped up in occasional back-up stories. But during the Rebirth era there’s been noting. Well, nothing unless you count a couple of cameo appearances by a mental patient who is probably Saturn Girl, imprisoned in our time.  And then there’s a cross-over with Bugs Bunny, a one-shot special event due to hit comics shops June 14.

Now comes word from a DC All Access clip of an additional alt. universe one-shot outing for the team, boasting the creative talents of the Allred family — Mike (art), Lee (story), and Laura (colors).

Batman ’66 Meets the Legion of Super-Heroes is scheduled to begin serialization in digital format starting June 14. Based on screen captures of the All Access clip posted by Lee Allred, the pairing will team the tv version of Batman, appropriately enough, with the Silver Age version of the Legion. Of course, the clips show Ferro Lad and Shadow Lass alongside each other. In the original continuity, Ferro Lad died in Adventure Comics #353, while Shadow Lass did not make her formal debut until #365.

In what looks to be a bit of fun, the story will pit the heroes against the combined might of Universo and Egghead, who clearly look to have been separated at birth!

One website, 13th Dimension, claims the Batman ’66/LSH one-shot will be “the last Batman ’66 comic of the run that started in 2013.” In addition to the ongoing Batman’66 title, there have been limited series teaming the tv-Bats with The Green Hornet, The Man from U.N.C.L.E., Steed & Mrs. Peel (a.k.a. The Avengers), and the tv version of Wonder Woman, known as Wonder Woman ’77. The latter title is currently three issues into its six issue run.

The DC All Access “breaking news” notice on the Batman ’66/LSH comic did not give a release date for the printed version of the story, other than to say a one-shot will be published in July.

For Legion fans in need of a fix (like me!) this summer can’t come soon enough.