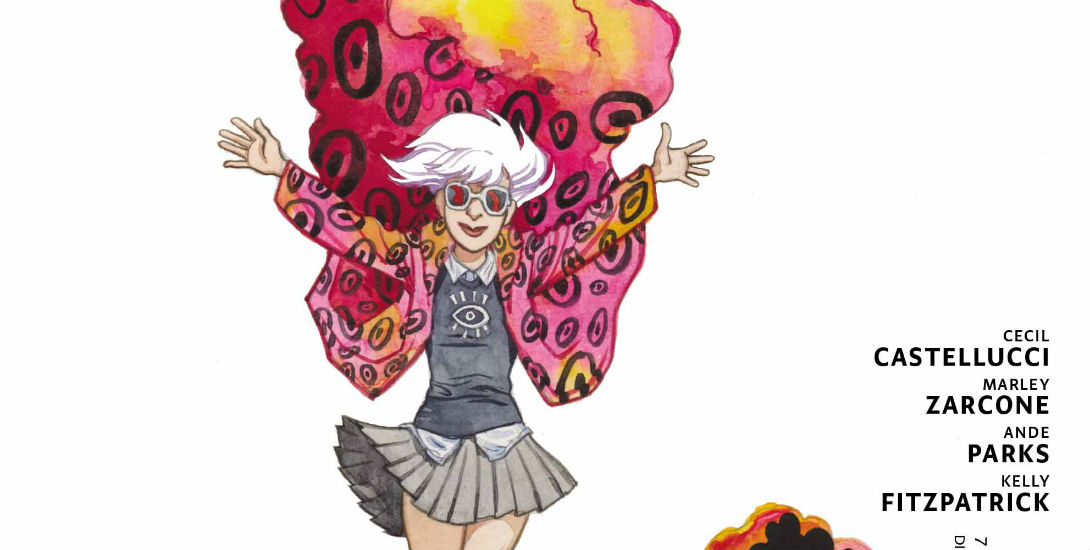 As Shade travels west to meet the actress who played Honey on “Life with Honey” she stops with a tour group at Los Alamos, the site of the testing and development of the Atomic Bomb in the 1940’s.  While this may seem odd, the back up story, another episode of “Life with Honey,” informs us of Shade’s experience with the Atomic Bomb.

Unknown to Shade, but shown to the reader, the actress who played Honey is in poor health and has a dire prognosis.  Her doctor suggests, jokingly, that a new body would be her only hope.  Shade leaves the test site and continues her journey, but is distraught to learn that Honey doesn’t live in the house that was used in the show and the current owners are not happy with all the Honeyfiles that visit.  Shade (somehow) gets into a bar and finds others in similar emotional states.  She connects with these people just in time for the arrival of the newest away team from Meta who are coming to  get the M-Vest back.

Meanwhile, Teacup and River are going through their own troubles.  River is intent on tracking Shade down and Teacup has had enough.  Shade’s use of her powers have made a path River is able to follow from the news reports from Gotham and other places across the country that have a “mad” quality to them.

The Metas attack and Shade reminds them that she IS a weapon when wearing the vest.  It doesn’t take long for Shade to use the vest to what could be considered extreme.  Another atomic blast?

The alignment between the “Life with Honey” back up stories and sub-plot are working extremely well as not only an echo of the things Shade is experiencing, but also what has informed her notions about life on Earth.  It makes perfect sense that she would stop at Los Alamos on the way west to find the actress who played Honey.  She is actually able to experience the past as she witnesses the test and interacts with the scientists.  The slow reveal of her powers is also effective.  This really hasn’t been a book about a super-powered alien, it has thus far remained focused on Shade’s transition to attempting to live life as a human and are not what she expected them to be.  That should sound familiar as we all face disappointments, surprises and outright shocks to our vision of the world when that vision meets reality.

There are a lot of directions this title could go as Shade explores more and more of her powers with the M-Vest.  Perhaps, the madness aspect is the most intriguing as it is more like a side effect rather than the intentional result.

As long as one enjoys a thought provoking read that focuses on the intellectual and emotional journey, you won’t find a negative in this book.  It’s way beyond the average read.

Shade has reached another milestone in this issue that opens doors for multiple directions.  Most significantly, how will she deal with what she’s done using her powers in such a way?  How will “Life with Honey” continue to play a role considering the revelations made about the actress’s need for a new body?