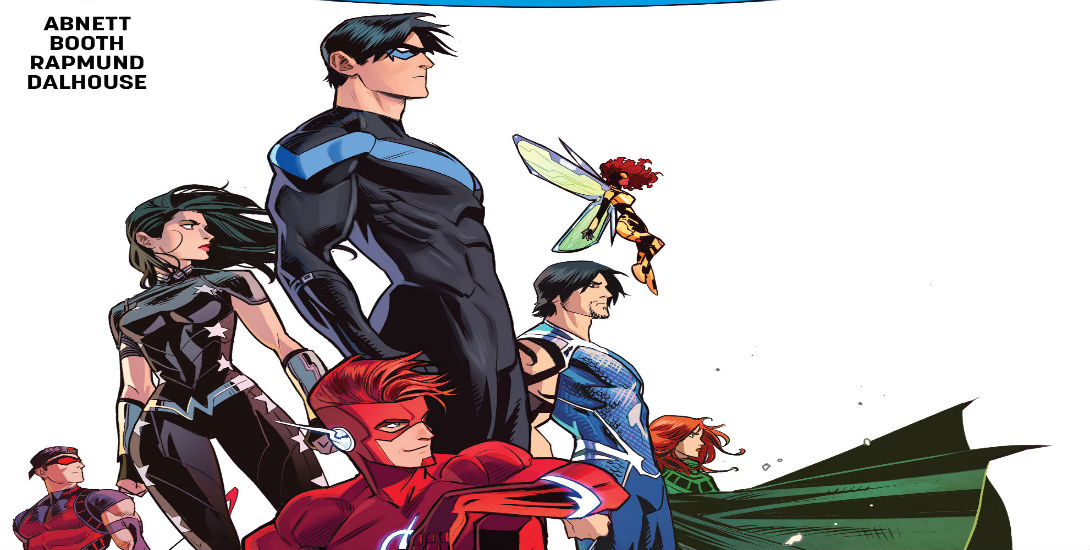 Revelations come to light between the Titans while battling an enemy from Atlantis. As the team begins to fall apart in the very heat of battle, only one truth actually remains–that there is a traitor among them!

Dan Abnett really addressed a lot of built up frustrations between the team in this issue. While the team was battling the Trident Three, a trio of sorcerer’s from Atlantis obsessed with Garth, Abnett also has them hashing out their own personal issues as well, and that turns into a disaster. Problems between Dick and Garth, Wally and Roy over Donna, among Lilith’s own doubts within herself all plague the team at once while battling the sorcerers. The Titans are getting their asses kicked–and Brett Booth’s amazing work provides a front row seat.

My only complaint about the issue is about Lilith’s return to Psimon for more information. Judging by their first conversation, Psimon manipulated Lilith to a degree, even though she thought she was in complete control of the conversation. I’m thinking that Psimon will use her for a purpose as something about Lilith was revealed towards the end of the previous issue. I’m looking forward to seeing how the team gains it’s focus and continues the fight in the next issue!

I thought Titans #14 was a good read and it’s quite enjoyable seeing the team fight amongst themselves while battling another threat. It’s interesting to see all of these different events and revelations unfold within the team–and this is all without the revelation of who the traitor is yet! Dan Abnett gives it to us in this issue, and the entire team will definitely feel how deep this betrayal goes. I’m looking forward to reading the next issue!