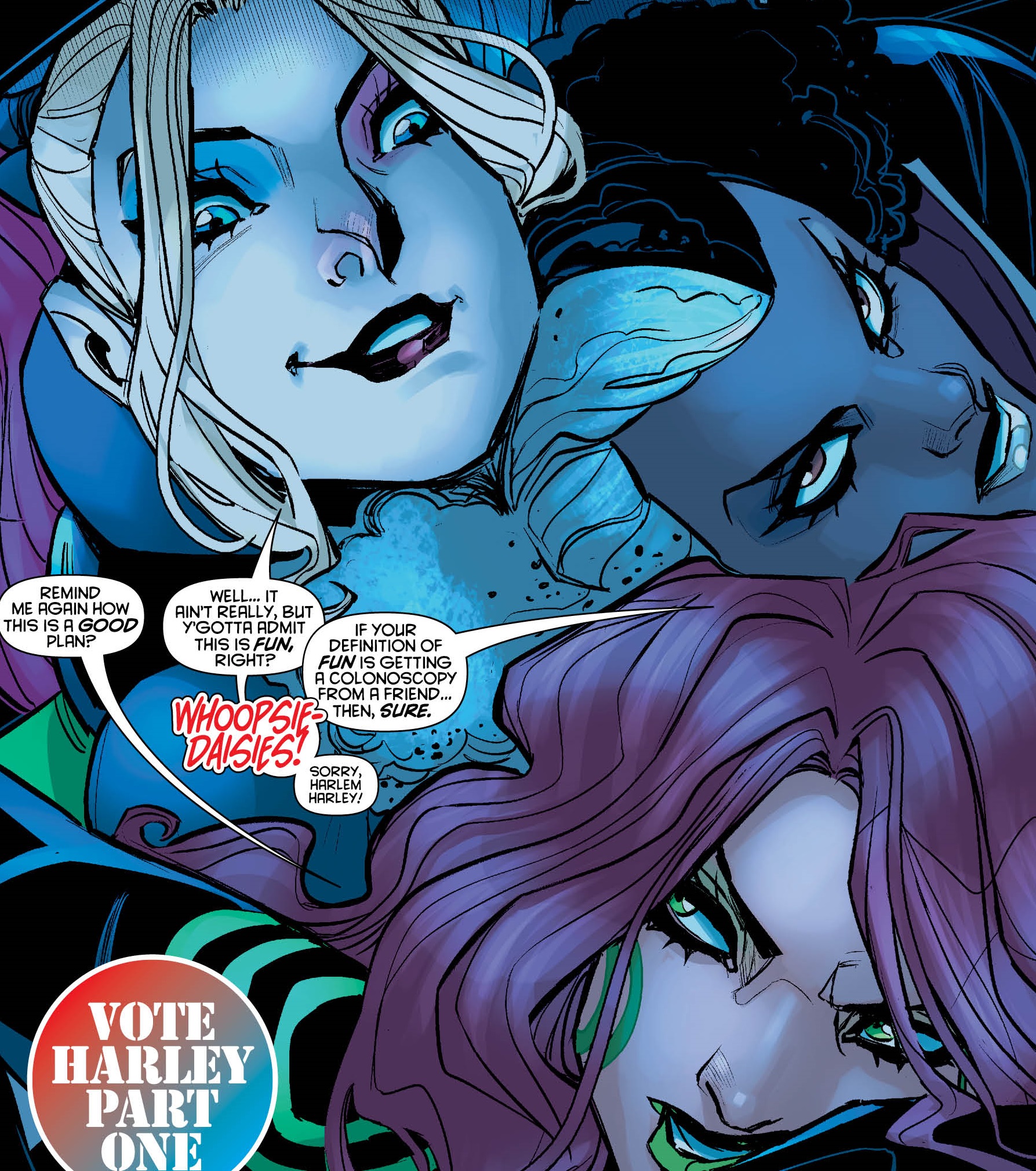 After defeating the Unconquerable 25 and torturing their leader, Harley and Spoonsdale learned what they needed to learn to start making moves on the Mayor.

After letting her roller-derby team and the elderly at the Brooklyn Assisted Living Center know that she would be taking a break for herself, she gets to work to take down Mayor DePerto.

The first step, to get Harley noticed and loved by the public. What better way than to have her help the police bring down a ring of exotic car boosters. Unfortunately, Spoonsdale left the how up to Harley, so when we find our hero of justice, she is crammed inside the trunk of a Lambo with Poison Ivy and Harlem Harley. The plan is simple, when the thieves open the trunk, take em’ all down!

How will the trio fair against a warehouse full of armed thugs? How will Eggsy handle this hard-boiled situation? And what will the Mayor do if it all works!? 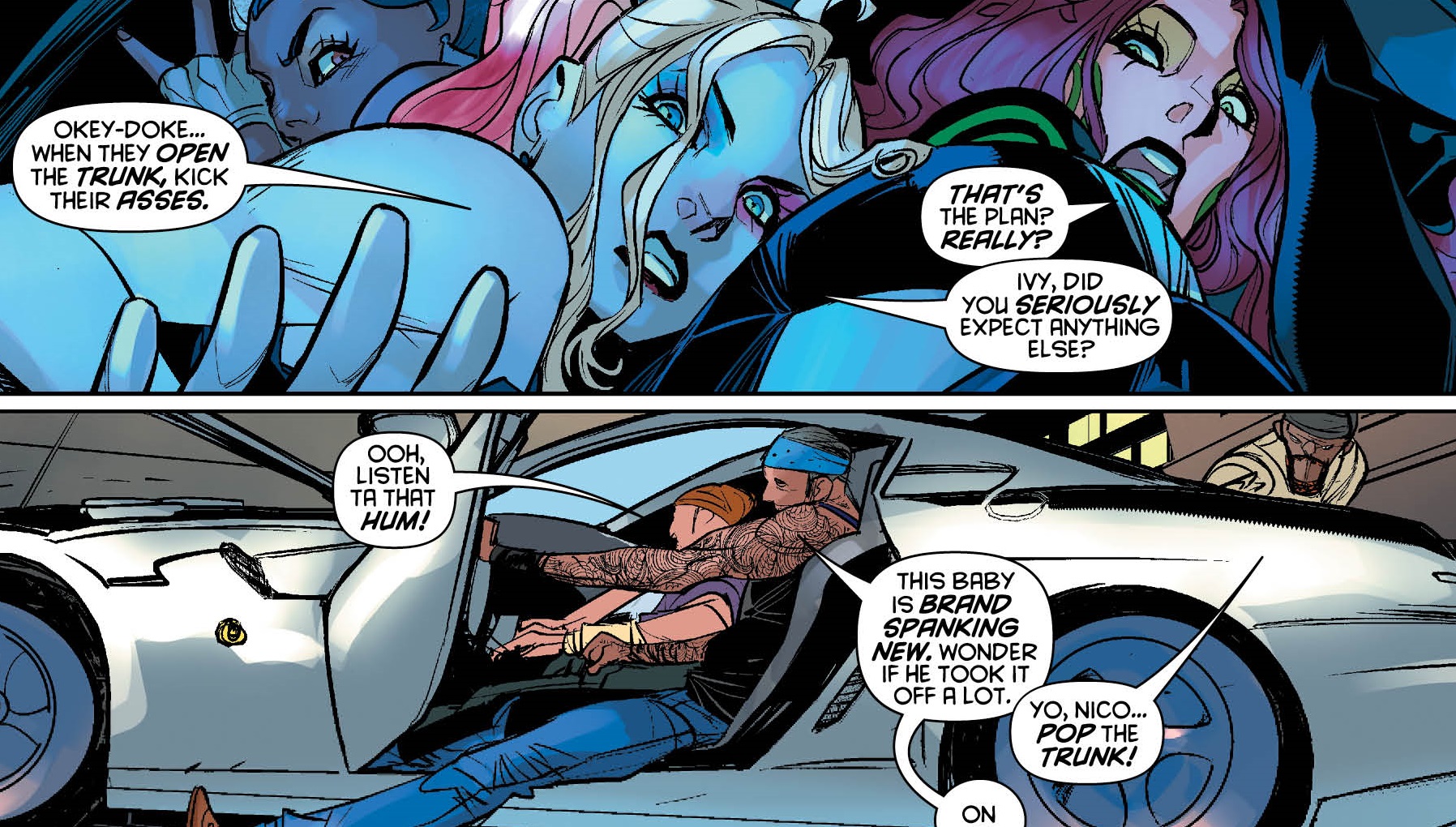 There is such a charm to this issue and the way that Harley and the gang take down the “bad guys”. Please note, bad guys is in quotations there because Harley isn’t exactly a good guy either…. The way that the three woman literally burst from the trunk of a car and suddenly turn into Charlie’s Angels is wonderful. Most of the issue is also filled with a Saturday morning cartoon vibe with how positive and campy it feels.

This issue features two different artists, but I must say that the style of their illustrations blends together perfectly. There is enough difference that readers can spot it, especially in the noses and foreheads, but they are similar enough to create a steady flow. What makes this alternation even better, coincidence or not, is that the featured artist, Tom Derenick, only illustrates scenes involving the Mayor and his lackey. Derenick’s slightly more curvy art style makes these parts feel distinct while also connected due to the visual similarities. 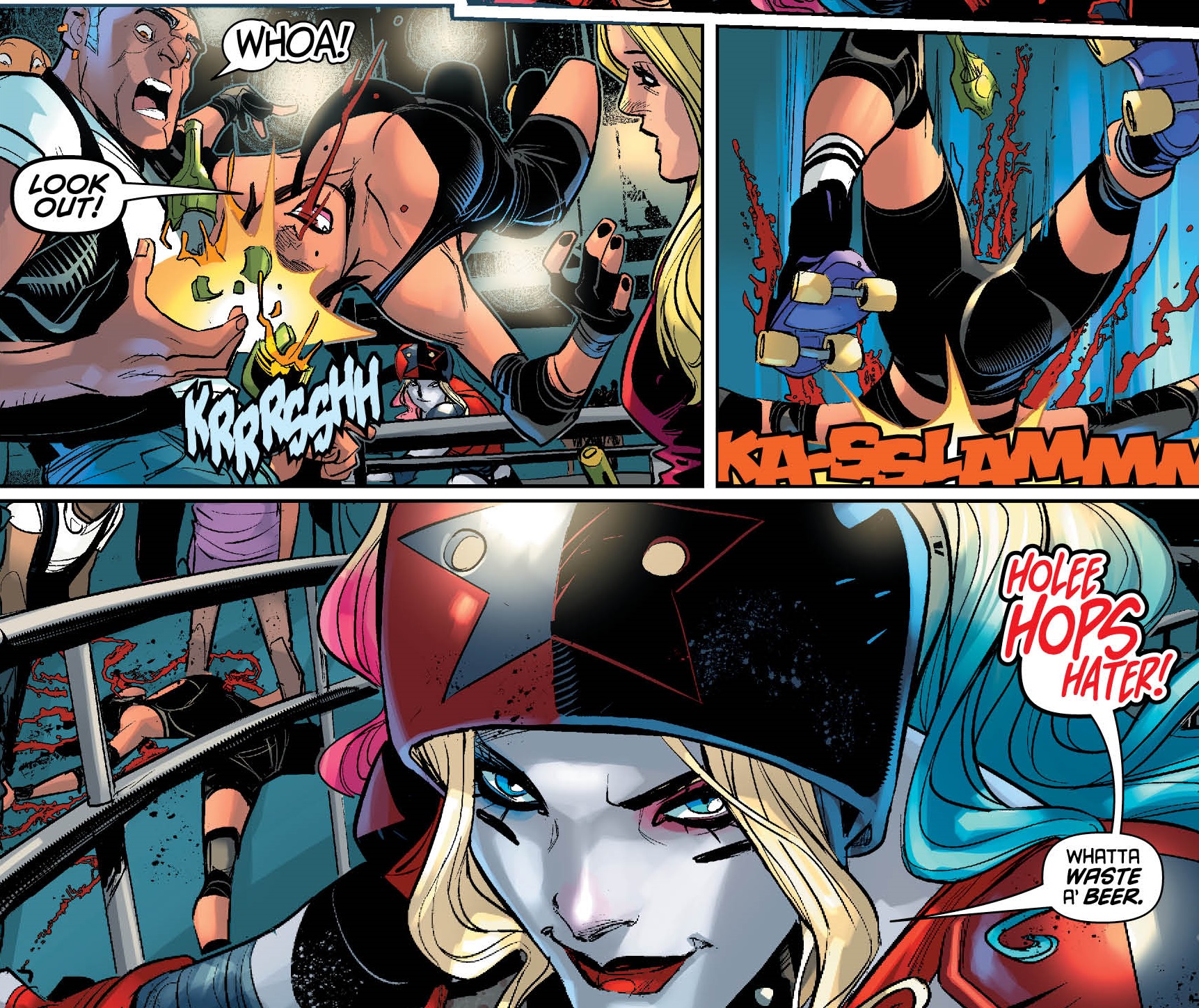 Through out this issue there are a few times when there appear to be errors in the illustration. First being on the second page when the Mayor’s lackey’s hair appears to be just about shoulder length, then suddenly is between her shoulder blades. Next, one of Harley’s gloves on the 8th page has no blood on it in one panel only to have blood suddenly appear on it in the following panel. Not to mention that they alternate colors from the previous page.

I must say the worst part of noticing these errors is that it only came after I was happily surprised at the attention to detail in the positioning of Harley’s hair dye.

This issue is a fun thrill ride full of excitement and feel good moments. Other than some nit-picky errors, this issue was fantastic.