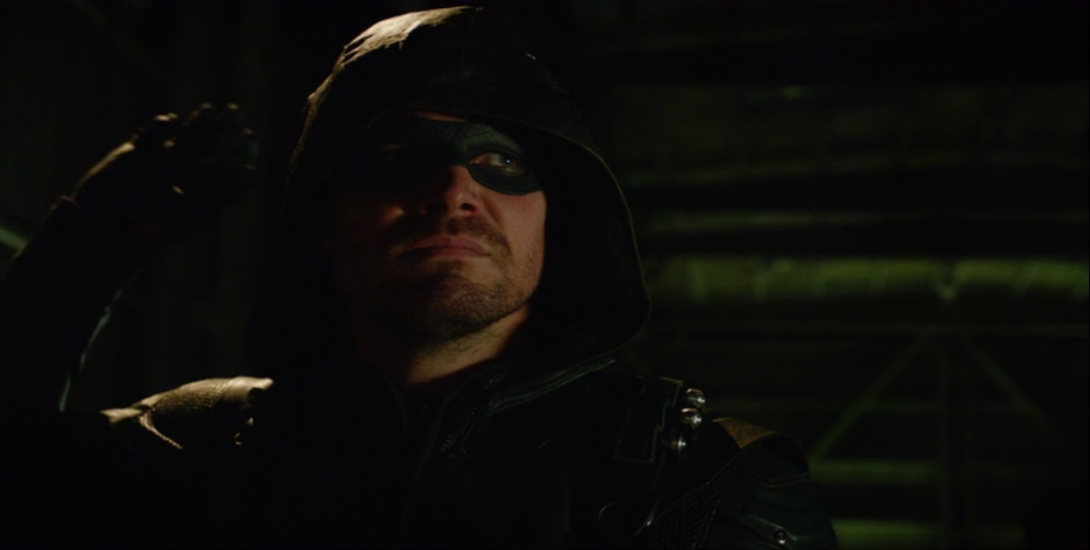 Oliver Queen faces the allegations that he is the vigilante known as the Green Arrow when a doctored photo surfaces. Then it escalates when Anatoly comes back to town and kidnaps the Markovian businessmen and demands from Oliver a ransom. Meanwhile, Oliver still tries to reach his son William and faces a dilemma about his vigilante work. On the other side of the team, Dinah finds out Diggle’s secret.

This week’s episode gave us some great scenes and Easter Eggs. As we all know, Oliver Queen again faces the allegations that he is the Green Arrow after a photo comes up. We all know that this is not the first time Ollie has had this problem, as it happened back in Season 1, where some CCTV footage was recovered showing Oliver was the murderous Hood. But he gets the slip and the police had to let him go. Then again, it happens in Season 3 where Oliver and The Arrow are one and the same and this information was given to the police which we know Ra’s Al Ghul was behind. But this was again proved “wrong” when Roy Harper surrendered himself to the police saying that he was The Arrow. We also know that his death was faked and since then he has been running for his life.

Now back to this week’s episode, Ollie then holds a press conference denying the conspiracy that he is indeed the Green Arrow. We also got a name drop on this scene where Ollie mentions Bruce Wayne and his beloved city, Gotham. He says “They could’ve placed Bruce Wayne’s head on that body. Has Bruce Wayne left Gotham to hang out in Star City?” Yup, you definitely read that one right. It now confirms that Bruce Wayne and Gotham City does exist in the Arrowverse. But the question is, are we going to see the Dark Knight fight alongside the Emerald Archer and his team, even just for an episode? We don’t know, but that would be one heck of an episode.

Next, one of the great scenes in this episode is the reveal that almost everyone in Team Arrow has a secret job so that they can pay the bills. Oliver is the mayor, Renee is Ollie’s assistant in the mayoral office, Dinah is a police detective and the reveal that Curtis is a freelancer, which made Felicity jealous. We get this funny conversation between the two hackers and Felicity bugging him on what he does and she even mentions “Python” which in turn Curtis asks “The supervillain?” In DC Comics, there are two villains that have the same name. One is Jacob Bernstein, an enemy of Wesley Dodds’ Sandman, and Black Python. Although these two villains only made two appearances in the comics, we are still happy to hear the two being referenced.

Another good thing in this episode is the reveal of Diggle’s secret. From the premiere, we get to see him traumatized and at the same time a bit off when he is on the field. This episode, Dinah breaks the wall and asks him straight to his face what is happening to him. Diggle reveals that when he and Felicity were caught in the blast on Lian Yu, Diggle was struck by a piece of shrapnel. He had surgery and ever since, he’s been suffering from nerve damage. He didn’t tell the team because he doesn’t want to be a burden. But Dinah tells him that he needs to tell Oliver or else the team will suffer the consequences of his actions.  It is a relief that we get to hear and not wait on what is wrong with our beloved Diggle, and hopefully, in the near future, he gets to deal with it.

Finally, one awesome thing that happened in this episode is that Oliver is now stepping down as the Green Arrow. Although, that is one heck of a huge leap for Oliver and it’s a bummer when you think about it, this is one step toward maturity for Oliver. We see him take the responsibility of being a father and wanting to be there for William, not wanting to make him an orphan. We also get to see him pass the bow to his best friend Diggle. The question is, will Diggle live up to Ollie’s expectations knowing that he is suffering from nerve damage? Hopefully we get to see that on next week’s episode.

One last thing. I still can’t get over that new title card for this season. On the title card, we not only see Green Arrow’s logo but the whole team, except for Quentin. We see Black Canary’s logo, Wild Dog’s insignia, Mr. Terrific’s mark, Overwatch’s Eye emblem, and Spartan’s symbol. It was totally cool and if you are a fan of the show and didn’t even nerd out, man you have some nerve damage issues.

In this episode, we can still see one rough edge that needs smoothing. That is the killing. We know that Oliver and the team are vigilantes with various methods to take down the enemies. We have the non-lethal like Mr. Terrific’s T Spheres which can be used as projectiles to knock any enemy he encounters unconscious. Then we have Black Canary’s great martial arts moves and her bo staff which can only break your bones and leave you whining from pain. And now we proceed to the lethal ones. We have Spartan and Wild Dog’s guns which they don’t explain what kind of bullets they are using. But most of the time, in the action sequences, you can see blood and it feels like they are killing the goons. Also we have Green Arrow’s arrows which is really lethal. From the first episode of this season, we get to see him shoot thugs using his arrows and it looks like he doesn’t shoot them in the shoulders or in the leg to neutralize them. He shoots straight to the vital parts, like the heart. I know that this version of the Green Arrow is a bit different from the comics but I think that they should be more cautious on where to shoot the enemy and what kind of bullets they use. Dig and Renee can use rubber bullets for crying out loud. This will just leave them sour in the morning and even think twice not to join any mafia or gangs.

And I think Oliver should now think that killing is not the only solution. He is mayor now and he knows and he should know the powers that he has and should use it. In this way, he can prove not only to himself but also to others that there is always another way. He really should use the boxing glove arrow to lessen bodies.

Arrow on its second episode is doing great. This episode showed us and even made us realize that sacrifice is the best way to go in life. Oliver made a decision knowing that this will make him a better person. His decision made him more mature. We may see some flaws but this will not let us stumble and hopefully on the next episode there’ll be more action sequences, great story telling and more Easter Eggs.