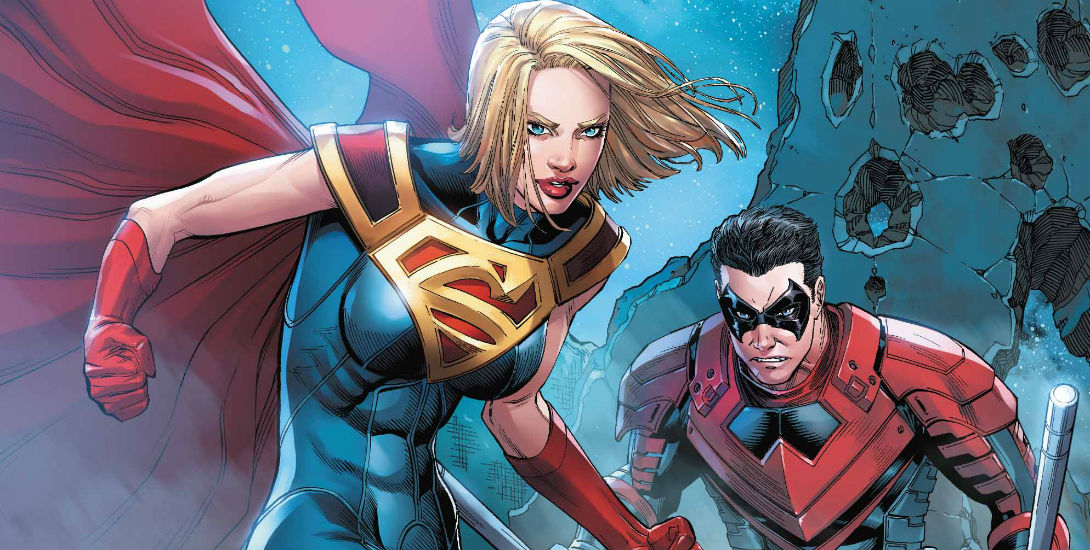 The scene shifts this issue as we leave Batman and his team to pick up Supergirl’s story.  She’s still in Kandaq, trying to learn how to use her powers under the tutelage of Black Adam. So far, this series has excelled at blurring the lines between right and wrong and maintaining an accuracy to characterization.  This issue exemplifies this in it’s depiction of Black Adam and Damian, who happens to arrive to request of favor for his grandfather, Ra’s al Ghul.

Damian takes Kara out on an exploration of the area and introduces Kara to the civil war in Bialya.  New to the world, Kara doesn’t understand everything, but throws in with the side she perceives to be persecuted.  Black Adam is not happy when he discovers that Damian has taken Supergirl out.  However, his tone softens when he realizes that Kara could be a great help in breaking out Wonder Woman.  What?

If Injustice 2 has done anything, it has explored the gray areas of morality.  Batman has a long standing code against killing.  Ra’s al Ghul has no problem with killing for the right reason.  This series tries to set characters on either side of this divide.  Supergirl is caught in the middle of this issue as she identifies with Damian in some ways and the situations she’s introduced to in Bialya.

There’s also the question of power and how it should be used, with the caveat of “when is it abuse?”  There’s a deep moral undercurrent beneath the capes and powers that should not be dismissed.

In a strange way, as much as you didn’t like Damian the last few issues, you relate to him this issue.  It seems like it’s all about perspective.  However, it is hard to imagine that Black Adam and others view Batman as pure evil.

I don’t know that there are any negatives here as the issue explores each character faithfully, as set in this particular iteration of the DC Universe.

When comics make the reader think, it’s a good thing.  It’s not always easy to view an alternate universe or take on characters.  However, this series has done a stellar job of re-imagining characters in a broken world where questions can be raised in an alternate history.  It doesn’t hurt to have a few morally ambiguous characters along for the ride to soften the shock.