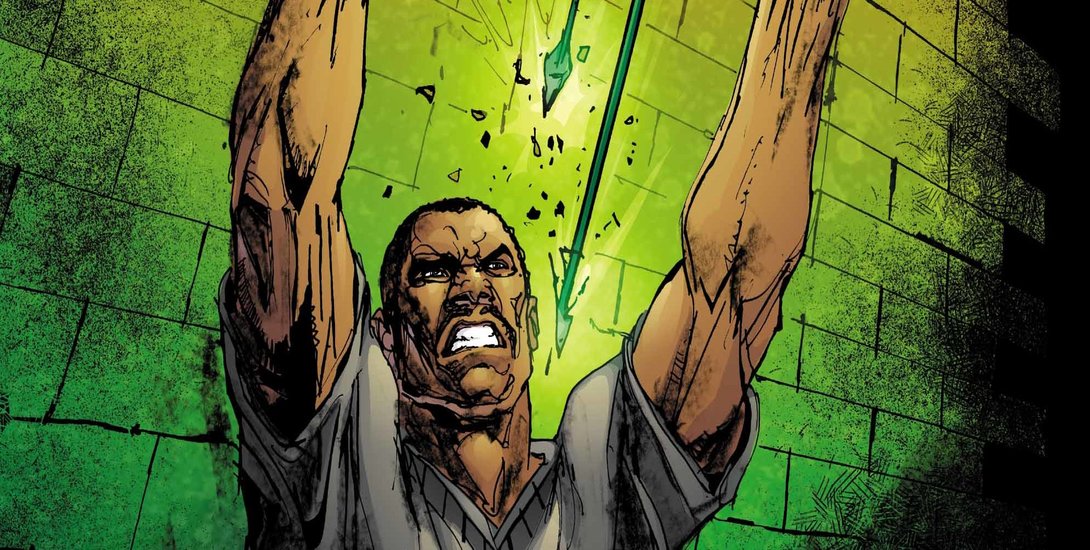 In this Wildstorm Universe, Michael Cray continues with his task of assassinating the deadly serial killer, Oliver Queen. Everything readers thought they knew about the DC Universe is inverted as they witness Michael Cray come to terms with his new job at IO. There’s action. There’s drama. There’s even a couple jokes.

First of all, I need to address my general confusion from the last issue. I was too slow to pick up that this was an alternate universe from the one we know. So my negative from last month that “Green Arrow’s a bit weird” looks very silly. With the validity of my opinion in question, I’ll now continue to list this issue’s many positives.

The plotting here is very reminiscent of the parent title, The Wild Storm. From the way the panels are laid across the page, to the way action sequences are broke down. It’s superbly done and like Ellis, Bryan Hill grabs the readers’ eyes and simply doesn’t let go until the last page. What’s great here is that it doesn’t feel like either Hill or Harris are trying to be like Ellis or Hunt. While the issue has certain aesthetic similarities, this issue confidently stands on its own feet.

In hindsight, this alternate Oliver Queen is really something special. The concept of an evil Green Arrow who hunts people on his own private island…it’s fantastic. It’s one of those ideas that are so good you wonder why it took until now for someone to write it. His characterization, his ‘heroic’ monologues, they all come together perfectly to offer a dark reflection of the hero we know. He’s even shown in darkness for a majority of the issue, although that’s far from subtle.

While the last issue prioritized dialogue and setting the characters in a certain time and place, this issue takes the context it was set up with and just ramps up the action tenfold. Page after page, the violence reminds the reader that this definitely isn’t like the DC Universe they know. These DC characters are stuck in the Wildstorm Universe with Michael Cray.

With a better understanding of the plot than I had last month, it’s harder to find negatives with the issue.

The art still isn’t quite what I’d like it to be. It’s not bad, but N. Steven Harris’s style just isn’t quite to my liking. The pencils are a little rough, which is a style I can admire, but the colouring is so clean that I feel there’s a slight contrast. I’m nit-picking though.

Sometimes Michael Cray’s dialogue is a little too “badass.” I understand that the character is cool and it’s obviously shown in The Wild Storm, but here we’re meant to be seeing his development. It’s a tad disappointing to see that he was just always the cool, calm badass we see in the series.

The only other real negative I have is with the opening. It’s a little jarring, especially for an issue opener. Now that may have been the intention, but it’s odd to jump into the issue at such a confusing scene. And it’s noticeable that once the scene is explained and over, the fantastic Queen/Cray fight scene begins.

A fairly fantastic issue that shows promise for the series. Bryan Hill delivers the action readers expect. The artwork can be a little hit or miss depending on the reader, but overall the story of Michael Cray hunting down evil versions of the DC heroes that readers love more than entertains, while also offering a fitting metaphor for the series.