“By the power of the Infinite Banana, YOU WILL KILL US ALL!” 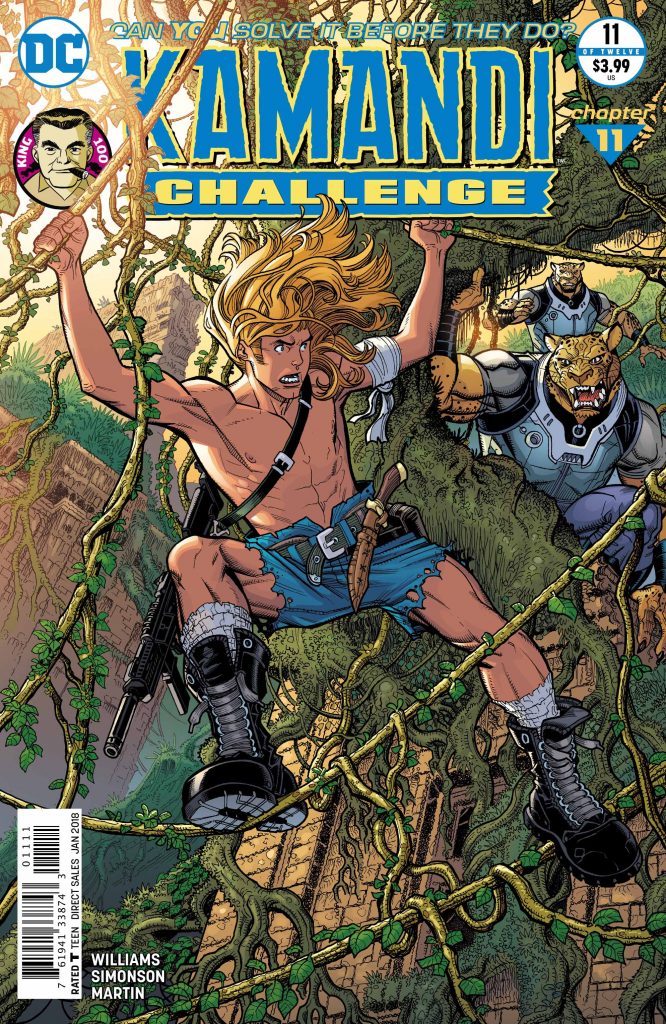 The battle for the Robot Watchtower intensifies as its main thrusters ignite, revealing the skyscraper as a rocket ship designed to imprison and transport Kamandi to the enemy of all living things, The Misfit. The Death Worshippers and Jet-Pack Shark Attack Crew suffer heavy loses trying to help Kamandi fight through all the swarming hordes of killer robots onboard the ship, and with a little more help from Silverbeck and his Gorilla UFO Squadron, Kamandi unleashes a suicidal attack on The Misfit’s Tek-Moon where his parents may be held prisoner. 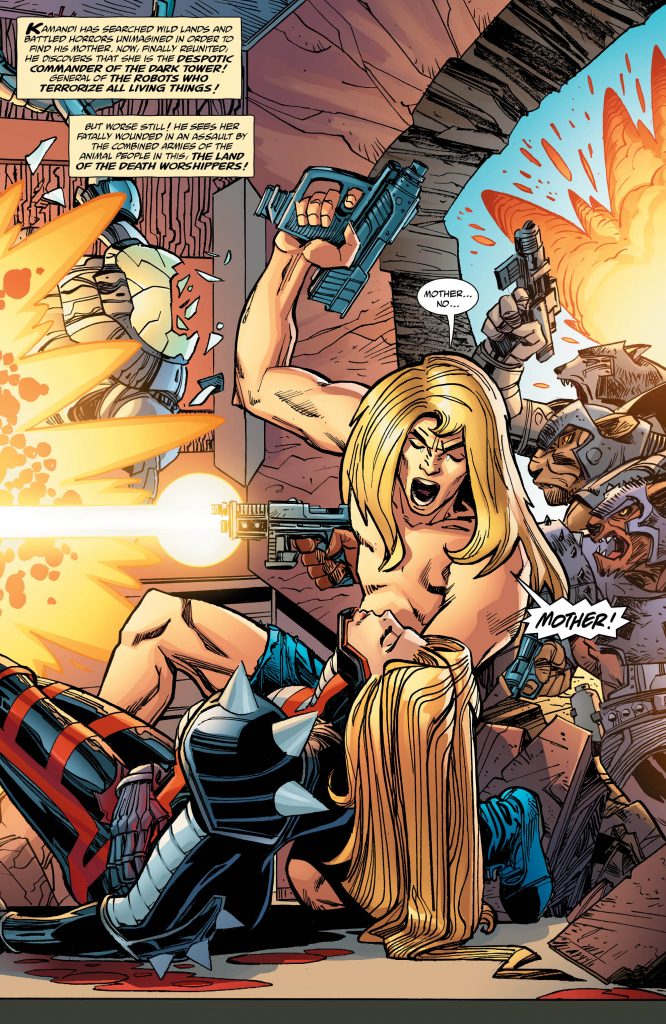 There are a lot of positives in this issue; it’s basically all positives. Firstly, Tayvos and the Death Worshippers stuck around from the end of the last issue to fight gallantly beside Kamandi one last time, with the assistance of the Jet-Pack Shark Attack crew. Besides having the greatest name for anything ever, the JPSA crew are also literally warrior shark punks with jet-packs. Hands down the best small part of this comic book as a whole, the balls-to-the-wall chaos of a Jet-Pack Shark Attack crew fighting an army of killer robots on a rocket launching into orbit is explosive and fun as you could possibly imagine, but not without some tragic, bitter sweet moments too. 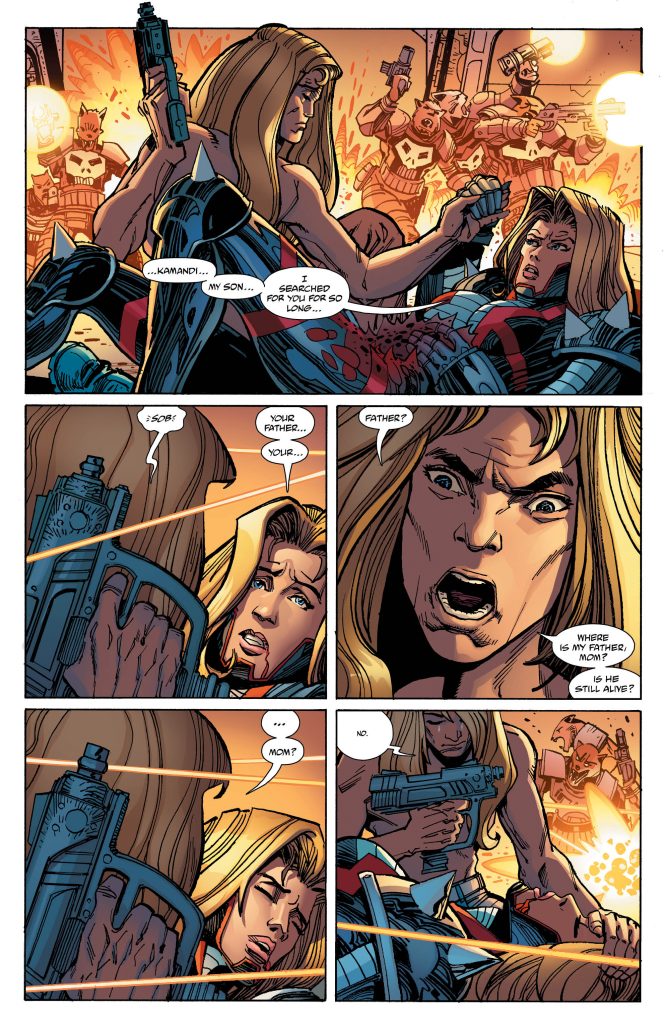 I also love that this issue of Kamandi decided to venture where no previous writer had dared venture before; because the key benefit of setting up a story like Kamandi Challenge with a space-theme, is that you can send a squadron of gorillas piloting UFOs into the centrefold whenever you like, and this month writer Rob Williams did those things. By the power of the Infinite Banana, he did them and we’re grateful he did. It’s easy to grow attached to the great characters introduced in each issue of this comic, and Silverbeck, Royer, their UFOs and their Banana-centric faith are immediately part of the favourites list. Fingers crossed they make their way through the cold emptiness of space and find the Infinite Banana, because as brief as it was, there was definitely something great about Kamandi and Royer fighting together, and Kamandi and Silverbeck fighting each other over control of a joystick. If the three of them make their way out of this issue’s mess, I hope the Gorilla UFO Squadron has room for a hairless sub-monkey in their ranks 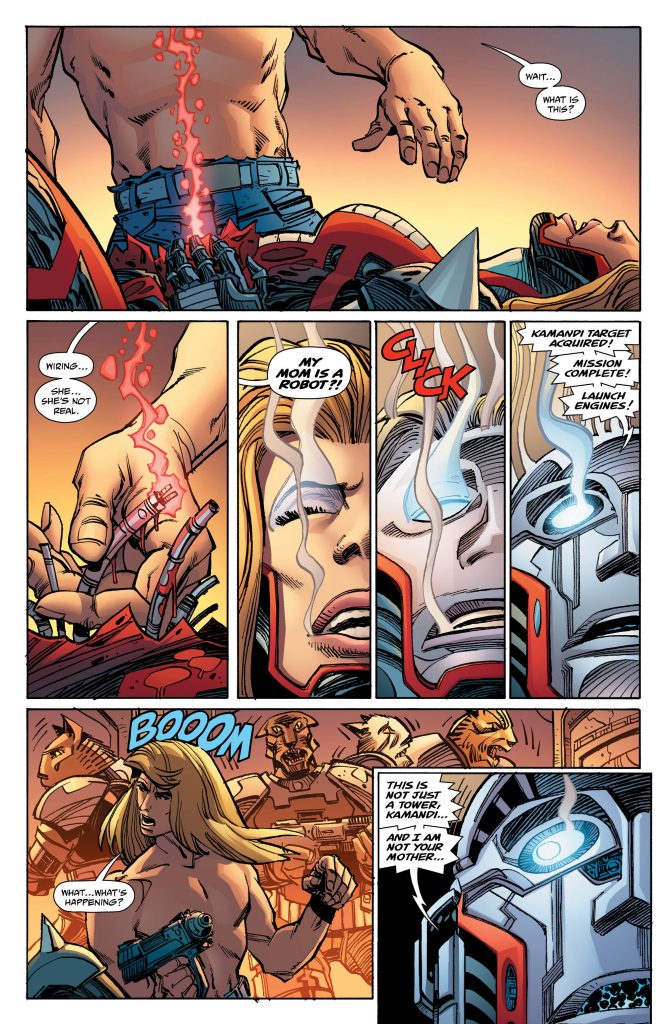 The Misfit – the villain of this issue – was a change from some of the other antagonists we’ve come across in Kamandi’s story so far. Rather than a religious sycophant or a gruesome surgeon, The Misfit infers that he is far more closely linked to Kamandi and the series of bizarre events that have strung together his globe-trotting journey, and potentially is  the captor of Kamandi’s parents. Hidden away on his Tek-Moon, The Misfit controlled the robot commander masquerading as Kamandi’s mother, as well as the robotic army trying to destroy all organic life on Earth. With his horrific appearance and access to strange technologies, The Misfit could represent the lifting of the veil as Kamandi moves ever closer to finding his parents and discovering what the hell happened to the world he once knew. 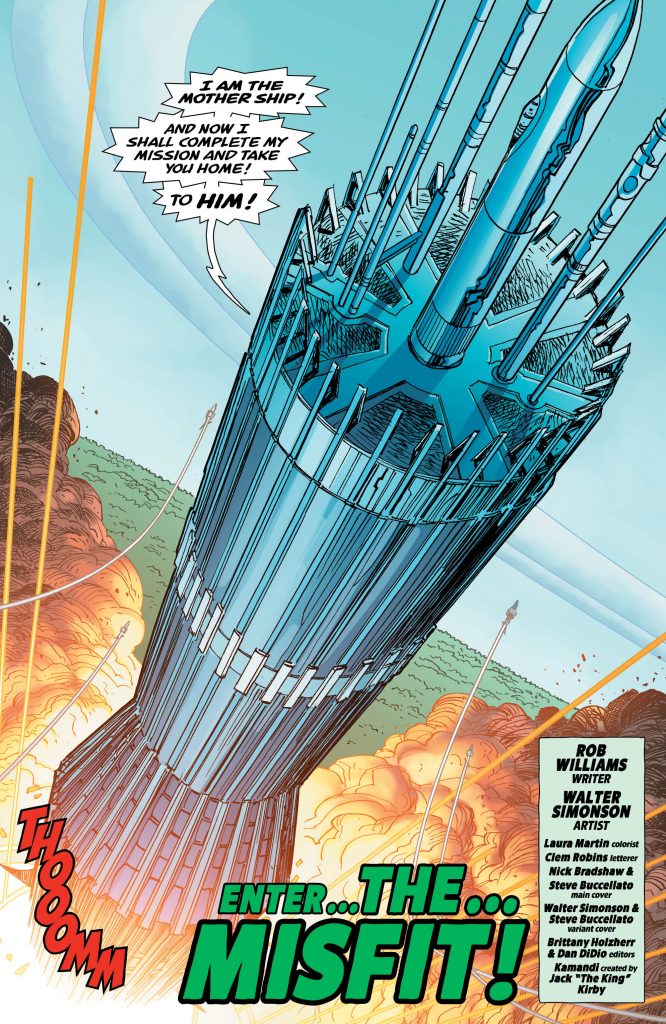 I have no negative comments for this issue. 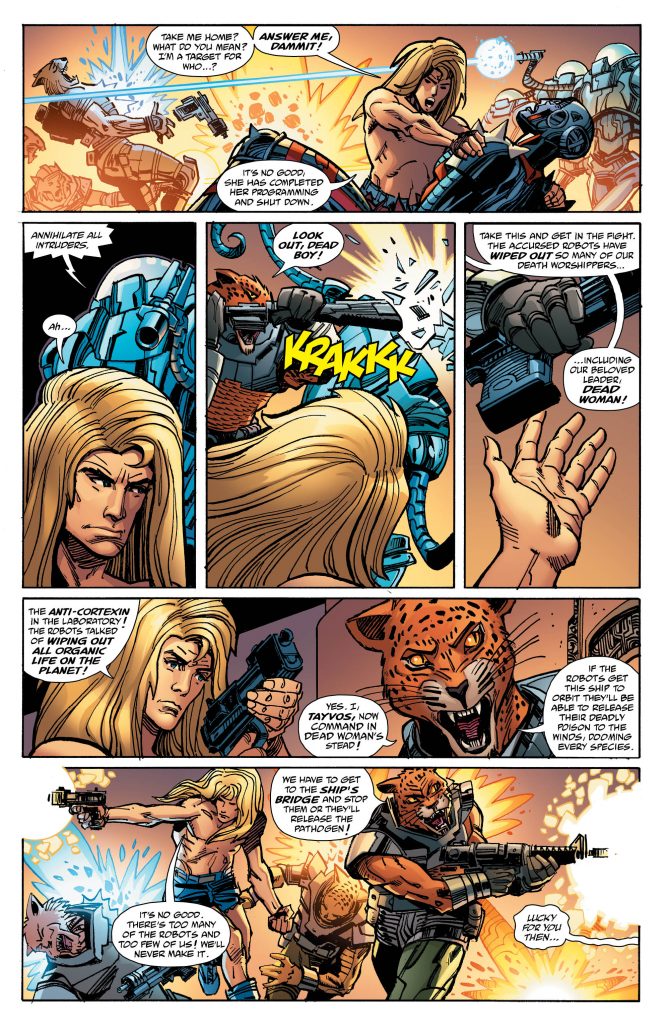 This is personally my favourite issue of the Kamandi Challenge so far. With a Sci-Fi edge and packed to the brim with wonderful fighting companions, this book boldly drags Kamandi kicking and screaming to a place no one can hear him, launching him closer to his missing parents.

Casting is in Effect for NIGHTWING Feature Film