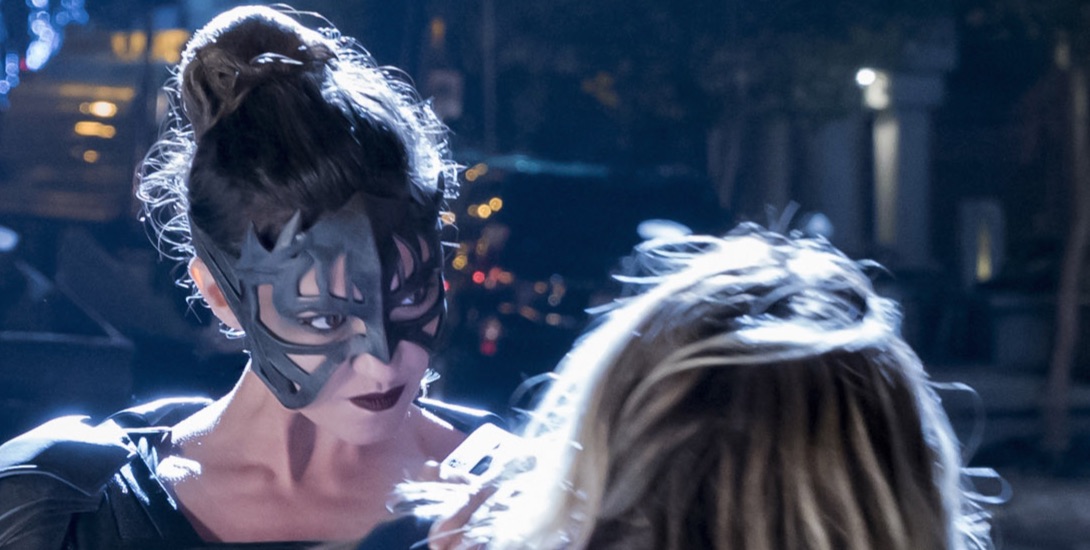 A mysterious Kryptonian symbol starts appearing all over the city which leads Kara to Reign, the Worldkiller.

The fight between Supergirl and Reign is incredible. It’s intense, brutal and engaging. I love that the fight goes to different locations. The bit that takes place in the office Christmas party is my favorite; the Christmas music in the background with the intensity of the fight makes a really fun combination. This is easily the hardest fight Supergirl has had yet and I love that it’s an actual Supergirl villain. It’s not a Superman character or a character created for the show. They took a somewhat obscure Supergirl villain and made her the biggest threat possible; that is so cool.

Additionally, it’s a fair fight and the two are evenly matched. The other DC/CW shows overpowered some of their villains to the point that the action scenes would just be the villains beating the heroes down. In this, Kara puts up one hell of a fight and gives as much as she takes. She does lose, but she nearly wins. This makes the fight more fun to watch and it will also help later. On Flash and Arrow, the villains that were impossible to beat the entire season are suddenly very easy to fight in the finale and it takes the hero no effort. There’s no tension. There is a chance Supergirl can beat Reign but we also know Reign can win; that’s more fun.

The Reign costume is amazing. I love the little similarities to Supergirl’s costume, but it’s more creative than just painting Kara’s costume black. It has a unique look while still clearly being Kryptonian. The mask is also really cool.

I love the mythology behind Reign. It’s different than the comics but I think I like this a little more. The idea of a hidden Kryptonian history is really fun. There’s a dark element that Krypton tried to scrub out. I also love bringing the religious fanatic back in for this. He provides the episode with an interesting theme; essentially, there is truth in religion that gets exaggerated and distorted. Reign is not literally Lucifer but the parallels are there.

While Reign is fantastic in the action scenes and I like the mythology, there isn’t much of a character there yet. She doesn’t really have a personality. She just gives the most generic villain speeches about being the embodiment of truth and death with nothing really to back it up. This was my concern with Reign being a split personality; Reign’s actions are somewhat informed by Sam, but Sam has no control and Reign doesn’t have much of an agenda. She’s a Worldkiller, so I’m guessing her plan is to kill the world, but that’s a little dull. It could go somewhere interesting and it’s not even that bad. It’s the character’s first real episode; she just felt a little dull to me in her dialogue scenes.

I like the idea of James and Lena being a couple; the actors have chemistry and the episode does manage to get me rooting for them to be together, but they act like this is something they’ve been setting up. Kara and Sam both say they’ve noticed obvious chemistry between James and Lena for weeks, which is not accurate. They’ve said one nice thing to each other and in this episode they’re suddenly making googly eyes. It’s random; the plot ends up working, but it was really sudden.

I’m not in love with the fact that James just stands there and watches Supergirl fight Reign without doing anything. We haven’t seen Guardian all season; this could have been a cool place to feature him. He’s fought Parasite and an army of Daxamites; he could hold his own and help. It would have been better if James and Lena just weren’t in that scene.

This leads into my next complaint. The show is in a similar place that Arrow quickly found itself in; there are way too many characters and the writers aren’t sure what to do with a lot of them. I appreciate that the focus is firmly on Kara this year; she got lost in the shuffle last season, but that has been improved. However, there are a lot of characters with nothing to do. Mon-El and Imra add nothing to this episode, but have a strange amount of screen time. M’yrnn, Martian Manhunter’s dad, has a cute scene at a Christmas party, but has served no real purpose to the show so far. The supporting characters are all demanding screen time but there isn’t enough space for everyone, which is getting frustrating.

Some of the cinematography is obnoxious. The camera moves around a lot and there’s a weird tendency to randomly zoom. During the Reign sequences and the fight with Supergirl, this style actually helps. While the CGI is pretty good, and way better than the crossover, Winter’s style helps blend the CGI with the actors. It adds a feeling of intensity and fear as well. But a lot of these tricks are also used in dialogue scenes and it’s so weird. There’s no reason to do it; it’s distracting. There’s a zoom in on Kara’s face during a conversation that made me laugh out loud.

Most of my complaints are nitpicks or elements that can be improved in future episodes. This is an excellent episode. It introduces an incredible threat to the show that raises the stakes in Reign who has a lot of potential as a villain. The action is phenomenal and there’s some interesting mythology. As I said, there are problems, but the episode manages to be a lot of fun despite those problems.