With the competition revving the anticipation infinitesimally Warner Bros is already looking to its own franchise films and exploring every avenue to keep itself in the game. While this summer’s Wonder Woman was a huge hit with both fans and critics, the much anticipated extended universe follow-up Justice League went lukewarm. The reviews on the first major crossover film that included some of the major players in the DC Comics pantheon were mixed, but that doesn’t mean that the studio isn’t willing to revisit another “big team” feature.

When WB first unveiled its list of DC Comics features in development, an impressive timeline that included heavy hitters including The Batman reboot and Bat-family flicks Batgirl and Nightwing it immediately reissued an update fast-tracking the Wonder Woman sequel, while potentially putting the embattled Flash: Flashpoint movie on the back burner and focused its attention on Aquaman starring Jason Mamoa as the next Justice League spin-off. There were some previously anticipated flicks obviously omitted from the revised list, among them Justice League Dark.

The proposed full-length feature which had Joseph Kahn attached to it appears to be moving forward, although it has changed numerous hands and most recently landed onto the lap of Gerard Johnstone who will be assuming additional story writing credit. Justice League Dark focuses on the magical and arcane elements of the DC Comics Universe and would rebrand both John Constantine and the Swamp Thing for the modern era on the big screen. Both characters were prominently featured in their own headlining movies, though did not compete as expected.

Recently Kahn revealed some of his artful character concepts for the colorful array of names that would have been leading the line-up, including a revamp Constantine and Swamp Thing, joined buy a rad steam-punk styled Zatanna, Deadman and Jason Blood, the human host of the Demon Etrigan. The images have given fans a reason to cheer and although some of the concepts reveal the director’s choices for some of the roles including Natalie Dormer as Zatanna and Chiwetel Ejiofor as Jason Blood, WB is not confirming how it will proceed with Justice League Dark.

Whether they would revisit these concepts or reinitiate a dialogue with Kahn is unsure, but the illustrations do give the sense that the characters would fit in with the Expanded Universe “real life” look that parallels some already realized heroes and villains, especially inline with how the characters from Suicide Squad evolved onto the big screen. Hopefully these images will have the desired effect and before long Justice League Dark will materialize appeasing fans’ tastes for all things that thrive in the shadows! 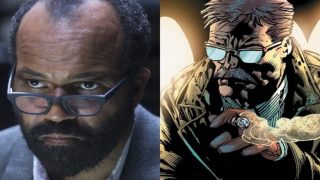