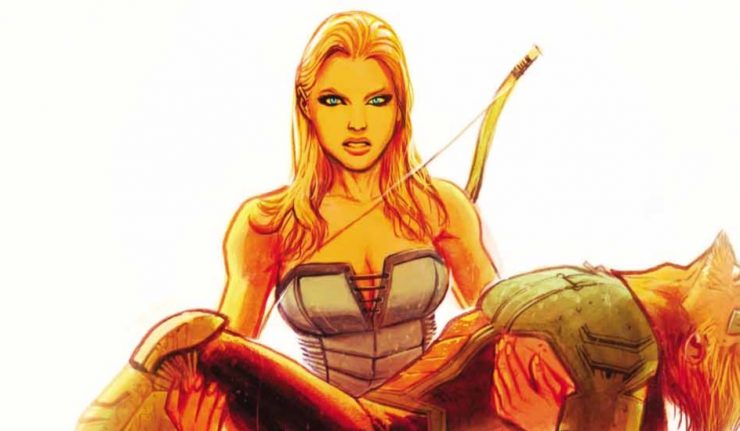 Juan Ferreyra’s cover is amazing. The sunset is gorgeous and I adore the colors. I also love how vibrant Dinah’s blue eyes are.

Ferreyra’s interior art is great as well. The colors are cool throughout with a nice variety of locations. The characters are so expressive; Ferreyra can convey a lot of emotion is his panels.

The issue is well paced. Benjamin Percy accomplishes a lot in this issue but it never feels rushed. It feels like it’s a super sized issue because there’s so much story in it.

I love Emiko. There’s a real energy whenever she appears that adds so much to this book. Her dialogue is so much fun and she’s the character I think Percy writes the most effectively despite him being very good with the other characters.

The talk about Oliver being “the man” is a little on the nose for my taste. It’s an interesting story and I like where Percy is taking Ollie. But it’s spelled out a little neatly in dialogue. One of Black Canary’s main roles seems to be explaining Oliver’s character arc to Oliver. And maybe it’s an issue of personal taste but I feel like that scene on the beach would have played better without the dialogue. Ferreyra’s art is good enough that the emotion and intent would have been completely clear even without dialogue.

The ending is a bummer. I know that’s the intent but it’s hard not to feel disappointed. It doesn’t ruin the issue or the series or any nonsense like that. Percy is a great writer and he made a choice that he felt was necessary for his story. I understand that but my immediate response was that I do not like this choice.

This is a strong issue. Percy moves the story forward in an effective and quick pace that is engaging. Ferreyra’s art is incredible throughout. I have minor gripes with one scene of dialogue and I’m trepidatious about the ending. But it’s an enjoyable story that looks amazing.