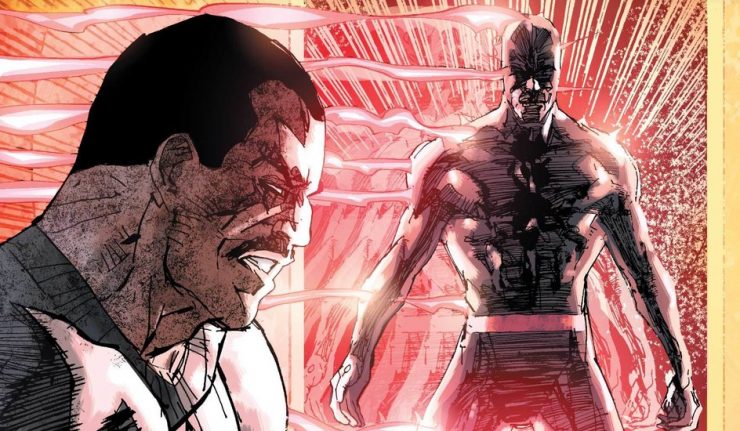 Michael Cray puts his plan into action to take out Barry Allen. His team isn’t 100%, but it’s up to Cray to prove to them why they should fear him. Taking a different approach to his attack on Oliver Queen, Cray befriends Barry Allen. The two get on quite well but it’s all part of Cray’s plan.

With each month, this series seems to get just a little bit better. Bryan Hill continues to prove himself as a more than capable writer. Given that Warren Ellis is writing the main Wild Storm series, it shows the faith DC has in Hill. And each month he shows to readers why they have this faith.

Hill’s dialogue manages to capture the realism of conversation in a story about speedsters and assassins. He’s able to separate the ‘silly’ stuff that make comics great from the ‘real’ aspect of comics that keep readers checking out each issue as they continue to age. Along with the dialogue however, Hill’s panel layout emphasizes his skills. The use of 3×3 panel pages shows that Hill is a writer capable of utilizing the entire page space effectively. These 3×3 panel pages help make pages of dialogue more interesting to read, but more could be done with the panels, as I will go on to talk about.

Like the parent title Wild Storm, Michael Cray does a great job of pushing the reader on through its action sequences. This issue in particular, which features the ‘fight’ between Barry Allen and Michael Cray, has everything you would and wouldn’t expect. It is a real joy to read.

As I said this series improves each month, but one of the reasons for this is the way Hill is developing the tone of the series through each issue. From the first issue I had fears this would be another dark story about a man coming to grip with his powers and his violent job. But here we are four issues in and Michael Cray is fighting evil Barry Allen like Roadrunner took on Wile E. Coyote. And don’t even get me started on next month. Hill embraces the absurdity of comic books while keeping a down to earth attitude.

I don’t have many problems with this issue. If I was to point out one issue I had, it would be the artwork again. As objective as I try to be, N. Steven Harris’s artwork just isn’t for me. I understand that this is a different Barry Allen than the one readers know, but there are panels here that make him look like a horse. Michael Cray’s nose is another feature that seems to vary in size dramatically depending on the angle. Sometimes it’ll look normal but on other pages it looks as if his entire face grew out of his nose. I’m overreacting slightly but it’s upsetting for me to like a series so much but disagree with the artwork equally.

Bryan Hill is coming into his element as Michael Cray continues on his Justice League killing spree. Goofy Elseworld-style stories aside, this is proving to be a fantastic series with great value to readers. Hill’s writing style can appeal to all readers, and while the artwork is a little spotty depending on your tastes, this series is starting to show up it’s parent title, The Wild Storm. Warren Ellis should watch out.