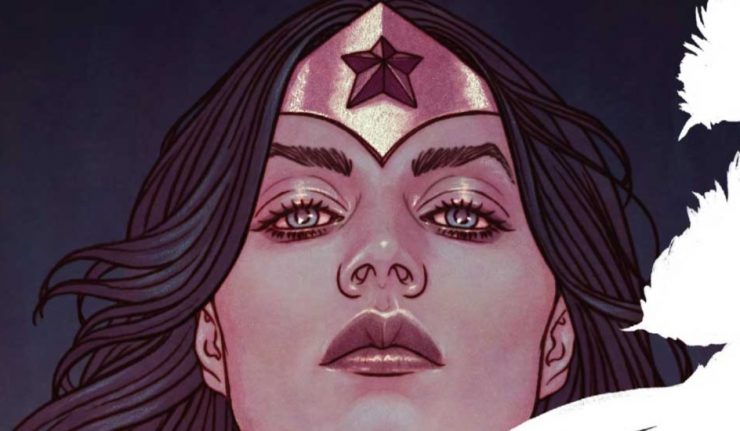 “SWAN’S SONG” part one! Vanessa Kapatelis thought the world of Wonder Woman—nobody had treated her with more kindness after the accident that shattered her life. But tragedy wasn’t finished with Vanessa…and she’s come to believe that the woman she trusted most is the author of everything that happened to her!

The cover by Paul Renaud is fantastic. I love the splatter of blood as a small detail. Diana looks great and the foreboding shadow of Silver Swan is very cool.

The interior art features pencils by Emanuela Lupacchino, inks by Ray McCarthy and colors by Romulo Fajardo Jr.  Lupacchino is one of my favorite artists, so I love the art in this issue. The characters are so expressive and well-defined. It’s gorgeous art that’s made even better with McCarthy’s inks and Fajardo Jr.’s colors. This is a really strong team.

I really like this reinvention of Silver Swan. Most of the issue is focused on her and from her point of view. She was crippled in a super villain battle, but Wonder Woman was able to save her life around the time of “Year One” I’m guessing. Diana helped her in her initial recovery, but as Vanessa got better Diana was by her side less as she was focusing on her superhero duties. Vanessa’s over reliance on Diana combined with the shock of her mother’s death leads her to becoming a super villain. This is a great character study as James Robinson slowly shows a young woman losing herself.

There’s an element of sympathy because of Vanessa’s situation; I do feel bad for her. But there’s an element of fear as well; Vanessa is clearly too attached to Diana, to the point of creepiness. It’s understandable, but still strange. I like that Robinson took the time to really develop and establish this character because she is potentially the most compelling Wonder Woman villain in a while.

There’s an interesting bit of dialogue in which Jason says he can make it on his own; he doesn’t need Diana. I think that’s really interesting in a story about a woman who completely broke in isolation. I’m curious if that contrast is intentional and if it will play into the upcoming issues.

This is an incredible issue. With the Darkseid War stuff out of the way, it really feels like Robinson can tell a story now. And this is a wonderful start. Vanessa is a terrific villain so far and I’m really excited to see where the story goes. The art is gorgeous and really drives home the emotion of the story. If you’re not reading Wonder Woman, this is a really good place to start.