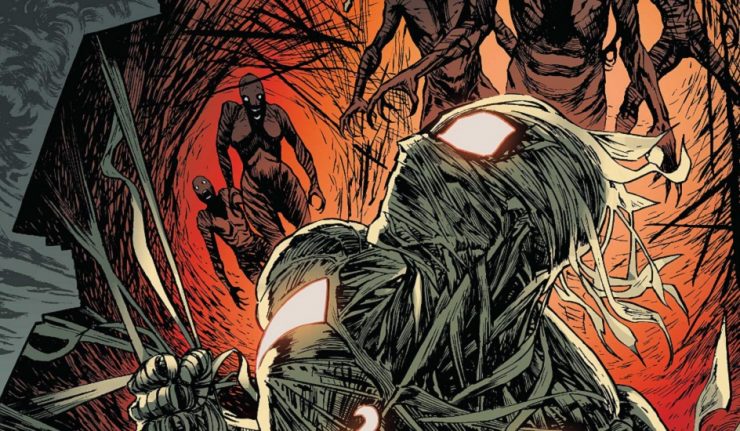 Having seen the horrors waiting to break into our world, Ragman decides to join forces with Etrigan in order to stop them. But as Etrigan takes Ragman under his wing, the souls of Ragman’s friends grow wary, fearing there may be more to Etrigan’s actions. And when Ragman’s attempts to stop the demons lead them to pursue a more personal target, Ragman must figure out whom to trust before all is lost!

In this issue, Ragman is well into his “mentorship” with Etrigan, who shows him just what his suit can do, and how he deals with his foes is very different from what Batman would do. The reader gets a backstory for Etrigan – who he was before he became a demon and how he is not that different from Rory. Ragman’s friends’ souls is a nice change to internal monologue, as Fawkes writes both quite good, but this adds to the character’s canon. Lastly, the final fight scene is pretty action packed and the ending finally adds the horror component to this book.

Worth the buy, as this creative team advances the character development in this issue, employing story devices that most would see in horror, but rarely in comics.

Tags:Etriganetrigan the demonInaki MirandaJason BloodragmanRay FawkesRory Harper
share on: FacebookTwitter Tumblr
previous article
ARROW, THE FLASH, DC’S LEGENDS OF TOMORROW, and SUPERGIRL are Expected to be Renewed at CW
next article
Review: Superwoman #18 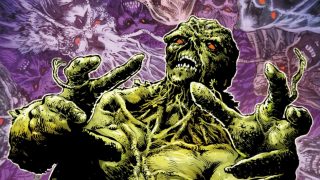 DC Gets Scary With Two New Anthology Books For Halloween 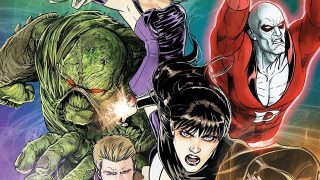