Ethan “Elvis” Avery just wanted to serve his country. Instead, he’s been changed into a monster!

Tasked as the government’s own living, breathing, ticking time bomb, Ethan retains no control when the monster takes over. Cheaper than a nuclear warhead and twice as effective, Ethan fights to rein in the damage he unleashes when the beast inside him springs free for one hour a day. With everyone around him in danger, Ethan struggles to contain the DAMAGE he inflicts on the DC Universe. 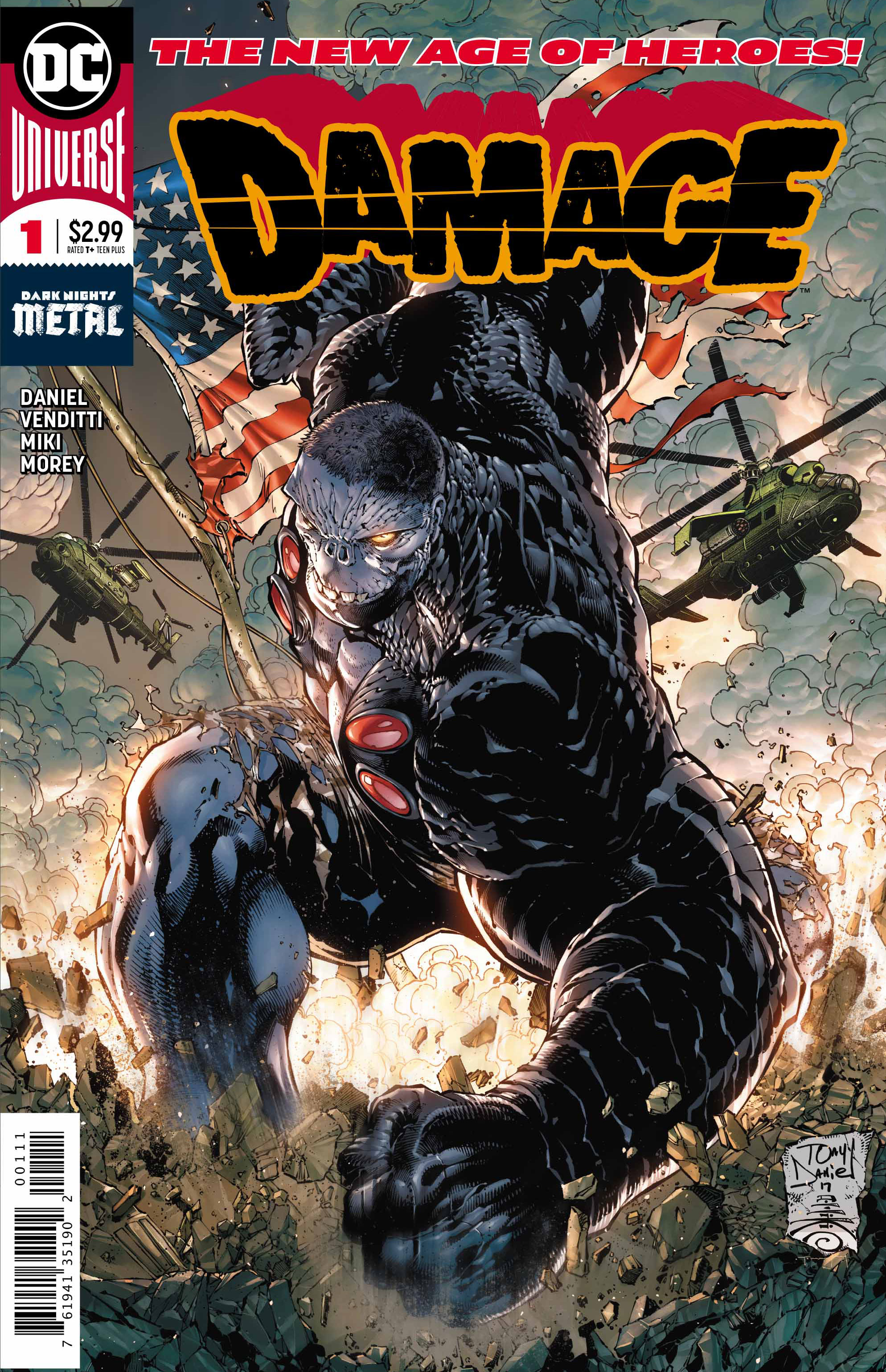 Tony Daniel doesn’t waste any time in establishing the basics about this new book. While it delves into archetypes that have been well-established in comics – human experimentation, weapons of mass destruction, black ops, super soldiers – it still does its best to tread fresh ground. While so much is going on around Ethan as Damage, your attention is drawn to the internal dialogue, establishing a split personality has occurred. The internal dialogue on the plane indicates that the personality of Damage seems more articulate when he is housed inside Ethan’s body, and less so when he manifests physically. It’s similar to the Banner-Hulk dynamic in Marvel Comics, but different in the sense that Ethan actively tries to influence himself from inside his head.

Damage is essentially a ticking time bomb, the nature of which is still undefined. Does Damage come out when he wants to? Or are there other external factors that trigger an episode? The provided clock at the lower righthand side gives a 24-like feel that there’s a countdown still going on. The inner conflict experienced also conveys important plot points, such as being changed against his will after being manipulated by Jonas. 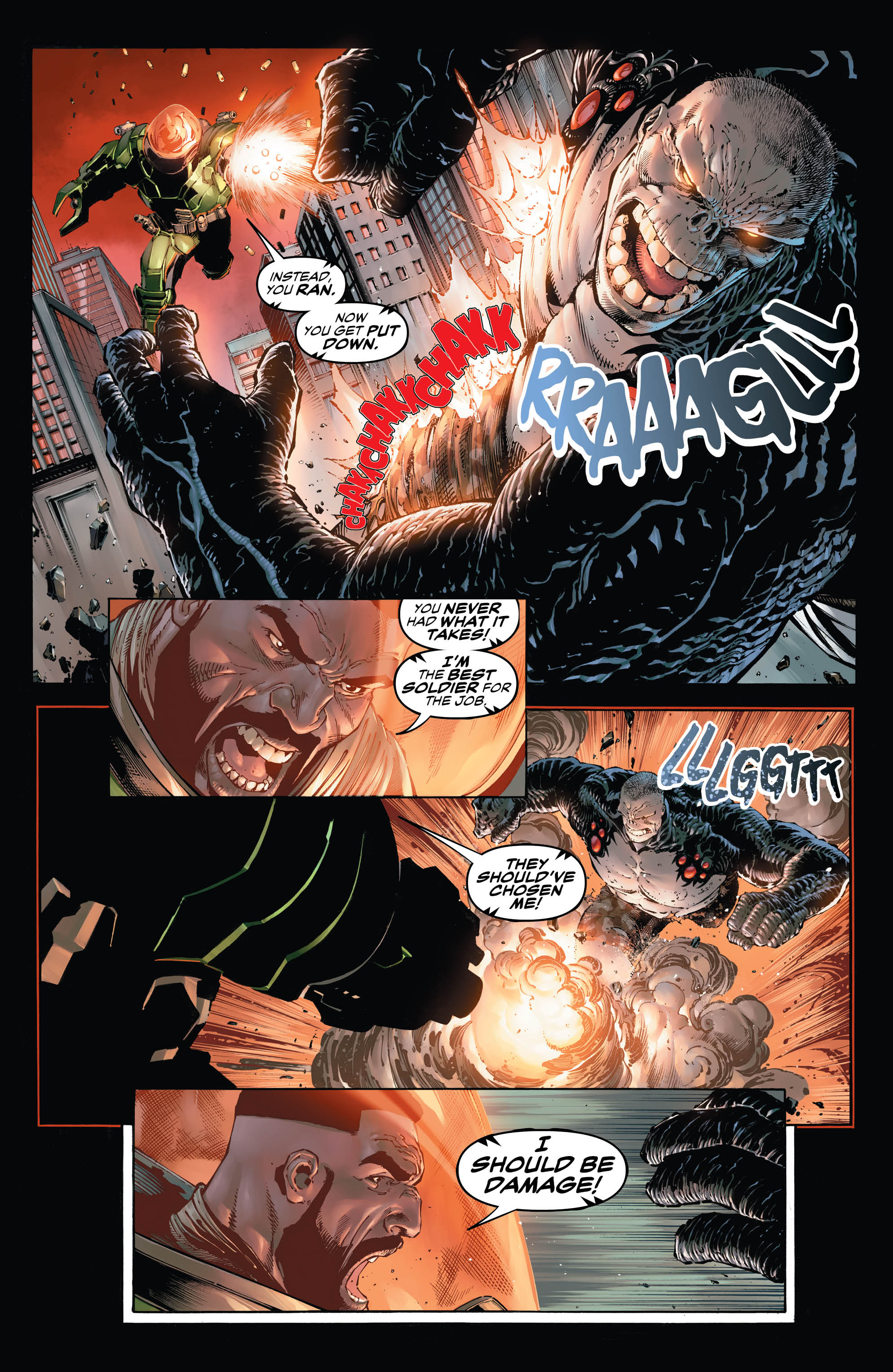 Then there’s Major Leggit. The way he chastises this soldier-gone-rogue is more than just dissension in the ranks. This is outright jealousy at being overlooked. He’s punishing him for the power he feels is his own right rather than the escape attempt. In many ways he evokes the spirit of both Major Glenn Talbot and General Thunderbolt Ross, again from The Hulk mythos. He’s depicted as a man trying to do his duty yet wrestling with personal feelings that ultimately results in his own undoing. Plus he is one who is conflicted; first he is pleading for his life, and when Damage shows mercy he chastises him for it.

The design of Damage’s face evokes a “dead man walking” reminiscent of Solomon Grundy, while the rest of the body’s textures show manga influences. The overbite and ape-like features convey the brute aspect of the character, but there’s still room for emotion. The character of Colonel Marie Jonas seems enigmatic. Her soliloquy reveals a conversation she had between herself and Ethan. Were they lovers? Did she betray him in order to shoehorn him in to this living Hell? Where did she lose that eye and how long has she known Amanda Waller?

The inclusion of Task Force X is a good way of welcoming Damage into the DC Universe given the group’s current level of popularity with readers and moviegoers. The decision of Daniel’s to leave the reveal of Ethan Avery as a human being till the final splash was a good idea because it leaves the reader guessing as to who is this guy? The mystery and the inevitable brawl with the Squad will hold readers to issue #2. The fold-up cover was also very clever, depicting both the transformation from Ethan to Damage as well as the cameo from the Suicide Squad. 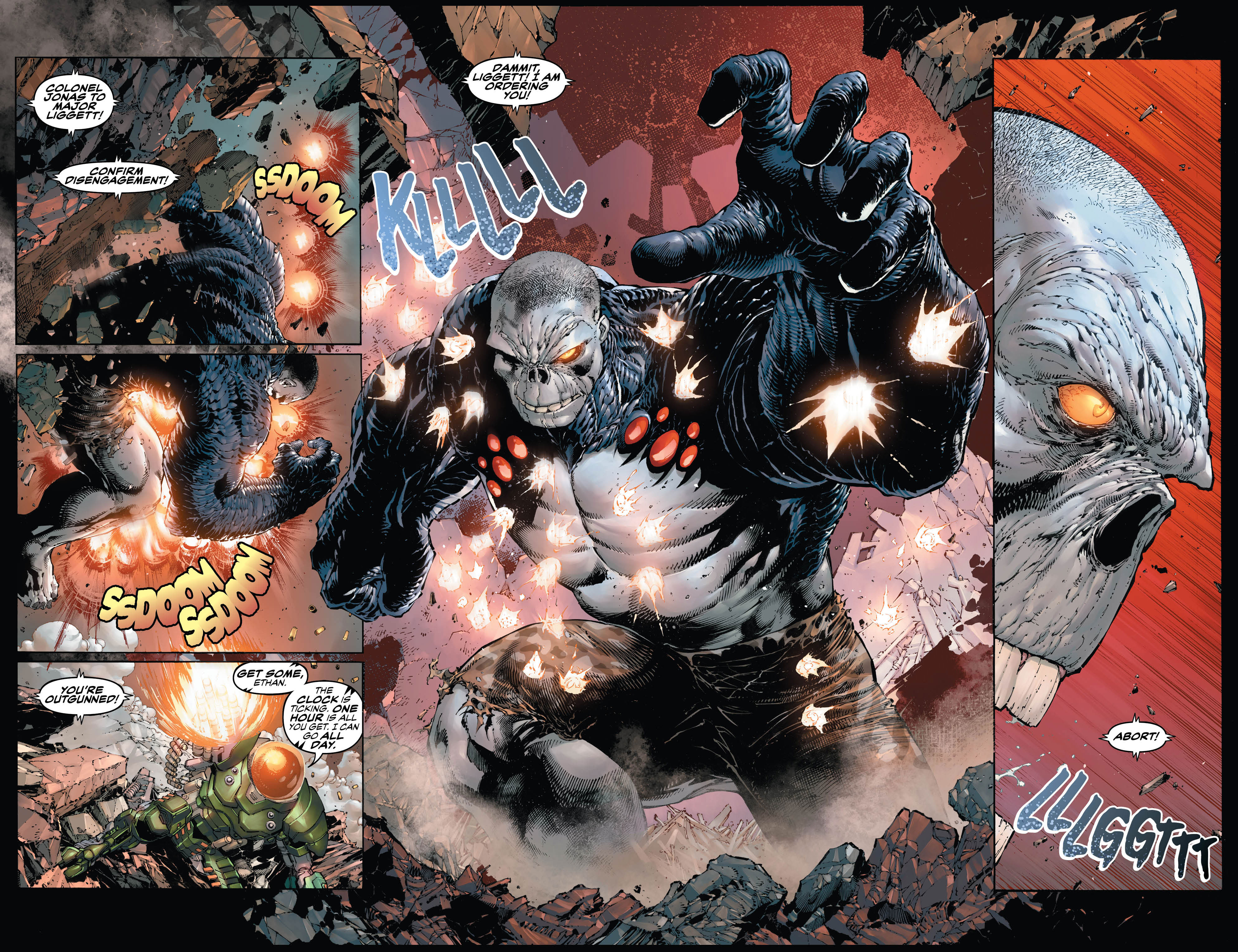 Given that this is a new book and the official jump-on point, it’s too early to point out any major flaws. Daniel has chosen to forego the origin story and leap right into the action, but I would have liked to have seen flashback sequences. Who is Ethan Avery? What is this project that turned him into this thing? What would push him to doing this?

Marie Jonas’ character design seems a little masculine in some sequences. Whether this is on purpose or not makes it difficult to determine her gender in some panels without the help of pronouns. Plus when did Giganta become a member of Task Force X? As to the layouts, although it was a 23-page issue not counting advertisements, once you get to the book it feels as though it was only a ten-page story. Everything moves that quickly; the violence in the issue makes the reader skip over the dialogue and focuses on the action. The focus of this issue was to get across to the reader the menace that Damage presents, but it’s at the expense of establishing the human element. Whether it was intentional or not, its protagonist can easily be seen as the main antagonist. 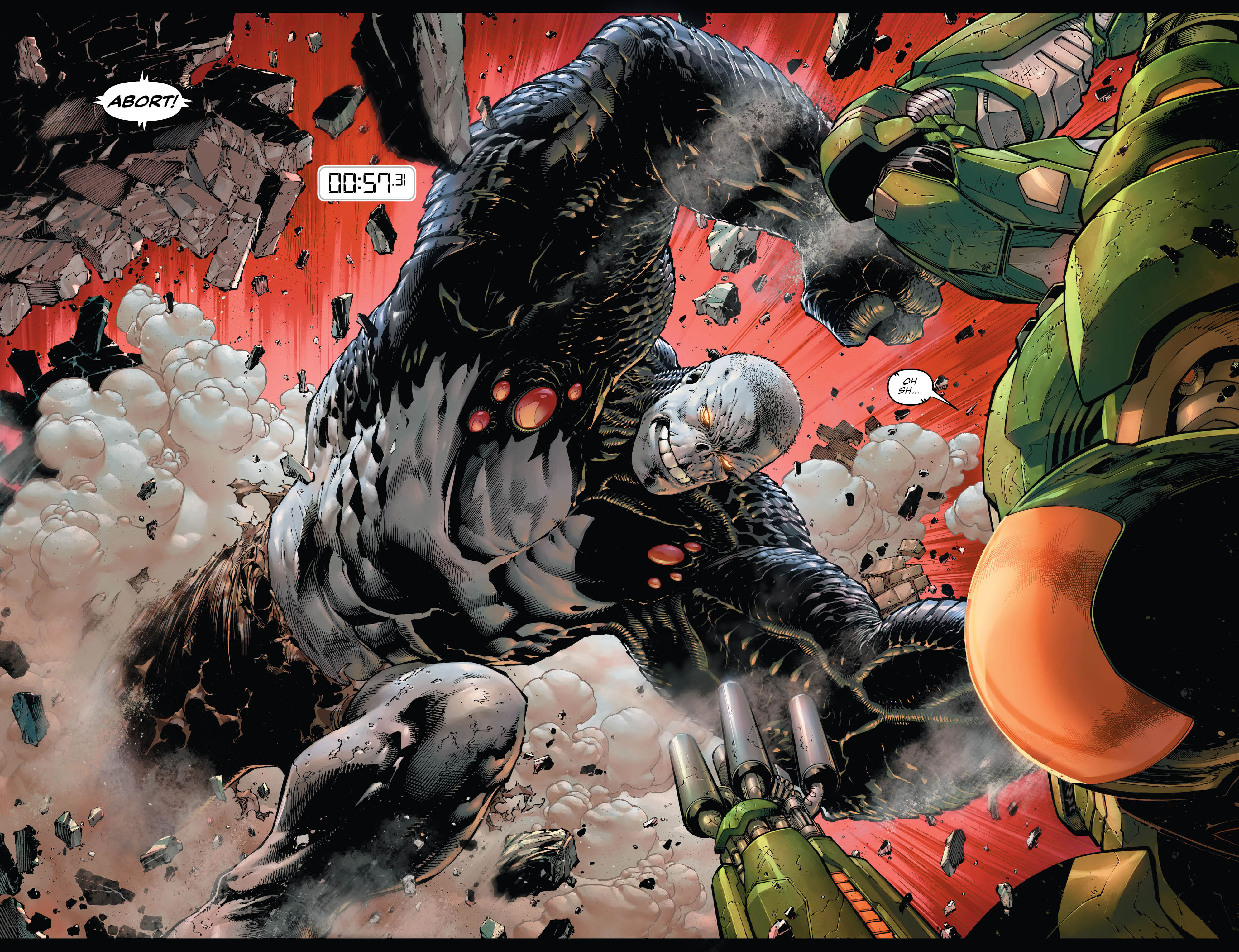 Despite the fast-paced composition, this is a very strong introduction to a future power player in the DC Universe that’s validated by an established antihero team. The artwork is tight and my one regret is that Daniel’s pencils ends at the cover. While Venditti’s pencils are awe-inspiring, I was hoping to see Tony draw the first issue. But that’s a very small complaint to a great issue. Perhaps the limited dialogue works in its favor. I look forward to the second issue, and those who read this review should do so too.

‘Arena of Valor’ Welcomes Wonder Woman To Their Roster