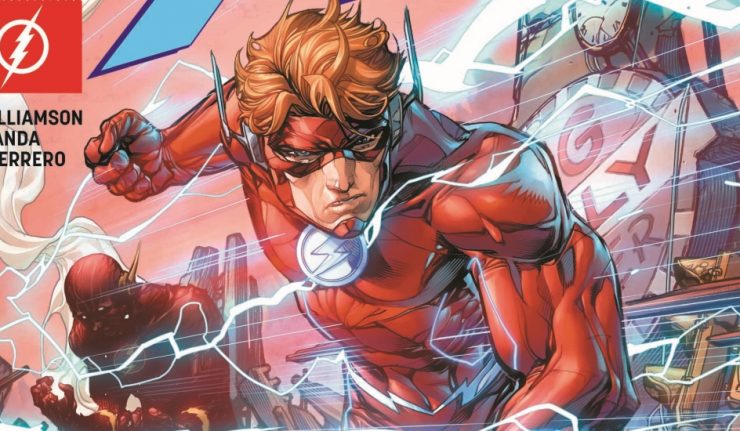 “PERFECT STORM” part three! The Flash has lost what he prizes most of all and must call in an old ally to protect Central City while he sets out to get it back…Wally West! But with a new Flash protecting his city, will Barry be willing to cross lines he never crossed before?

Grodd revealed Barry’s deepest secret last issue: that the only value he has as a person derives from his powers, then Grodd stole those very powers. Barry’s behaviour this issue certainly bears this out. Barry is becoming obsessed with getting his powers back, believing that doing so is the only way to beat Grodd.

This does show that Barry does retain some of his basic optimism. All the tests Barry undergoes indicate that his power loss is permanent, but Barry maintains that he can use Raijin’s lightning rod to get them back.

However, his belief that getting his powers back is the only solution betrays that although he has named the original Wally as the Flash of Central City, he doesn’t believe Wally capable of defeating Grodd.

What’s worse, is that in his desperation, Barry turns to Godspeed, for help, releasing him from his cell. August seems eager to help, and he has helped Barry before, claiming to have seen the error of his ways. But can Godspeed be trusted, or has Barry made the situation much worse?

Meanwhile Wally is busy with the task of evacuating Central City, one person at a time. He is taken aback when he reaches his Aunt Iris, still not quite ready to face her and the possibility that she might not remember him. This serves as a reminder that Iris is equally as important to Wally as she is to Barry.

And we can see tension developing between Wally and Barry. Wally is uncomfortable with Barry’s obsessive behaviour. And Barry desperately doesn’t want Wally to see him while he’s like this. As Barry tells us, “I don’t want him to ever meet that version of me. The one from before the powers.” Could this tension cause a rift between the Flashes that leads to the upcoming Flash War storyline?

Interestingly, Barry is shown calling Kid Flash “Wallace” instead of the usual “Wally”. It could be that Barry is being somewhat formal to stress the importance of what he is telling the younger Wally, but we have never seen him call him this before. Could this be finally the way they’re going to make it easier to differentiate the two Wallys: the older keeping the diminutive Wally, while the younger goes by Wallace? It seems to me that this is probably the simplest solution.

I’m still not entirely convinced that Barry totally believes he has no worth that’s not derived from his powers. But perhaps he will come through this crisis of faith by finding a deeper reserve of strength within himself than Grodd could reach. Or could Barry’s sense of worthlessness have actually been planted in his mind by Grodd, and not uncovered as Grodd claims?

Although I am still not completely sold that Barry’s self-worth comes entirely from his powers, it still is an amazingly good story – especially since we get to see Wally taking such a prominent role in the story.