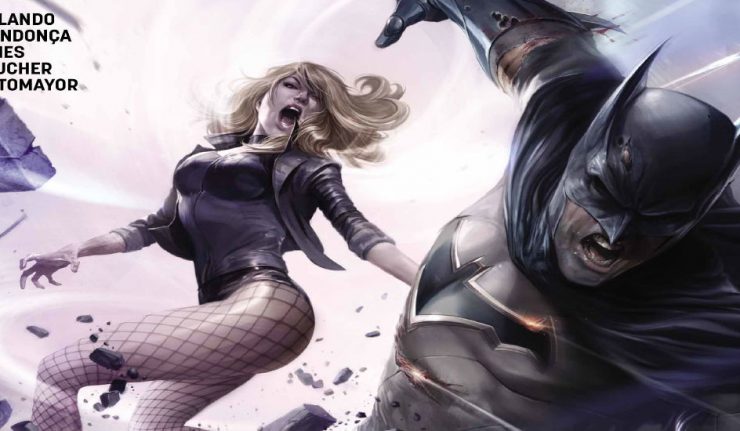 Batman and Black Canary continue their battle against Lord Havok on Angor! As the Adjudicator looks on, the battle looks hopeless! However, Batman has one remaining play up his sleeve–but will it work?

Once again Steve Orlando brings it home in this issue! Continuing from our previous issue Lord Havok continues to bring down pain on Black Canary and Batman. Batman actually uses some tech to take the fight to Lord Havok–special shock gloves that amplify his hits! Lord Havok feels every mighty blow–but ultimately it’s not enough! Dreamslayer–who was transformed into Lord Havok thanks to a hidden code, is still fighting inside and eventually splits into two different parts! With Dreamslayer back in the battle it looks as if this fight may be over.

I have no negatives about this issue! The book is action packed, and the art with Mendonca is awesome on every page! Batman and Black Canary ultimately save the day thanks to some of Batman’s quick thinking. He convinces The Adjudicator that he will sacrifice himself to restart Angor, however after seeing Batman’s intentions–Lord Havok sacrifices himself instead!

Overall this issue was a great read! Orlando really wraps up this story and then tosses in another one right at the end! I was already a Batman fan before but this issue really shows you how selfless he is. An entire world full of people that he’s never met, heroes and villains he’ll never know and he was willing to sacrifice himself for the world to be reborn! Batman’s only reply when Black Canary addressed him about it? “Every time I put on this cowl…I’m willing to die. This is no different. People in need.” Those few words really set up the whole reason for Batman’s existence and why although only human, he’s one of the best of us.