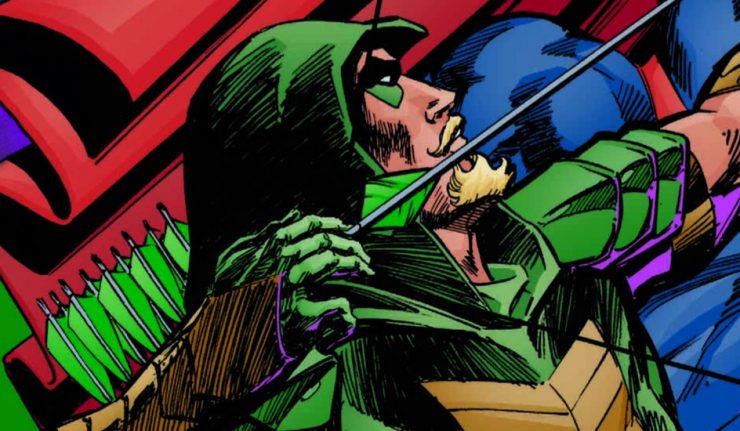 Oliver travels to a war-torn country to provide relief but is ambushed by a local terrorist organization led by a masked individual known as Nothing.

I really like the cover by Tyler Kirkham and Tomeu Morey. Green Arrow and Nothing both look fantastic with a lot of detail. And I like the colorful background.

The interior art is by Marcio Takara with colors by Marcelo Maiolo. I like their art. The city looks absolutely demolished; the state of things is communicated well through the art. I also really like Nothing’s design. There’s a Deathstroke influence that is built into the story and the character and it works well.

I like the premise. Deathstroke got involved in a political conflict; his example inspired a group of surviving citizens to take control. I think it’s really interesting to take the idea of a hero inspiring people to be better and applying it to a more morally ambiguous character like Slade.

There’s a creepy element to Nothing and his revolt. I don’t want to give it away but the idea is effective in this issue especially in how it cripples Ollie.

As soon as Oliver arrives, his pilot is killed. The issue makes a huge deal out of this. Ollie acts like this is a big deal and someone he knows is dead. But I know nothing about this dude; he flew Oliver to this place in a helicopter and then died. I have no connection but the issue keeps bringing it up like it was a massive loss. The character only exists to die so Ollie can have some motivation. But Ollie already has motivation; he wants to right Deathstroke’s wrongs and people are in trouble. This character and his death are unnecessary.

It is a little disappointing that the last issue featured the team coming together again and this issue immediately throws Ollie into a situation by himself; he only mentions Dinah in narration. This story very easily could have included Diggle.

The issue is a little boring. Nothing has a big speech that doesn’t really do much for me but is intended to provide the weight for the story and its themes. He comes across as generic; there’s potential and I like the concepts but he’s dull. There’s not much to Oliver here either outside of “my kind of friend is dead and I’m kind of mad about it.”

This issue is fine. There’s a lot of potential and good ideas. The art is solid. Ultimately, it doesn’t do much for me but I am still curious to see where it goes.