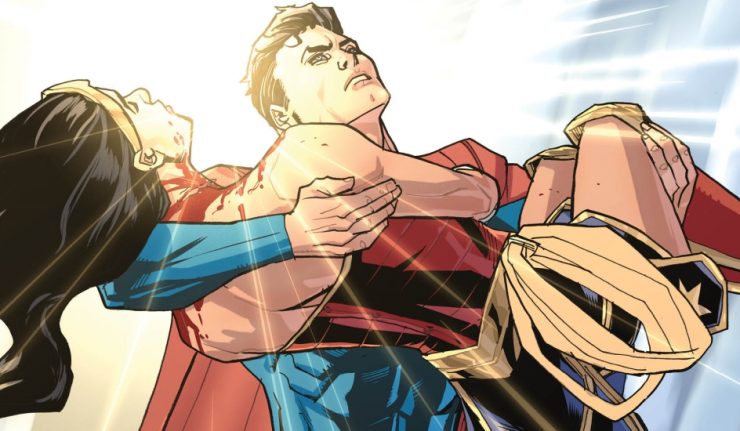 “JUSTICE LOST” part two! Trapped in the chaos of tribal conflict, the Justice League becomes divided over whether to intervene in a civil war in order to protect thousands of fleeing refugees—and a crucial decision could have dire consequences for one of their members! Meanwhile, Batman and Aquaman clash over how to take down the nemesis known only as the Fan, who holds all of their secrets hostage.

Much of this issue deals with Wonder Woman being critically injured in a way that is unexpected: by ordinary gunfire. We typically see Diana deflecting bullets with her bracelets, but Priest reminds us of the usually overlooked fact that this depends on her seeing the bullets coming. When taken by surprise, Diana is vulnerable to attack.

Priest manages to make Diana’s brush with death much more real than you usually see in superhero comics. For a moment, I almost believed that Wonder Woman might actually die.

Superman’s reacts to the situation in a very human and relatable way. He immediately forgets the current crisis and starts to fly her to a hospital. The Flash is more level-headed and reminds him that he needs to stay and protect civilian lives and that Barry can get Diana to help much faster.

I like that instead taking her to a hospital or S.T.A.R. Labs, as we would expect, he takes advantage of the DCU’s network of superheroes. He has Kid Flash contact his Teen Titans teammate Raven to attempt healing Diana.

Deathstroke’s stake in this matter confrontation with Red Lion is still unclear. He isn’t behind the attack on Cyborg, but he doesn’t seem to be on the League’s side either – or is he? Deathstroke conveniently leaves behind a knife where Cyborg can reach it and use it to save himself. But Slade Wilson is too clever and calculating to have just carelessly do so. It seems to me that he must have done so deliberately.

And then there’s his solution to the League’s nemesis, The Fan. It’s a solution that the League couldn’t carry out themselves, and they definitely don’t approve of Deathstroke doing so.

While the method Cyborg uses to save himself is clever, it seems somewhat overly complicated. I had to read his explanation carefully three times before understanding it. Also, what use is a failsafe switch that you have to use a knife to cut into yourself to activate? In an emergency, you would want quick and easy access to the failsafe, rather than having it somewhere that is inconvenient and painful to access.

This story may be a bit confusing at times, but it is certainly exciting and offers a fresh perspective on the Justice League that is somewhat different from their other adventures. I look forward to seeing where this story leads.