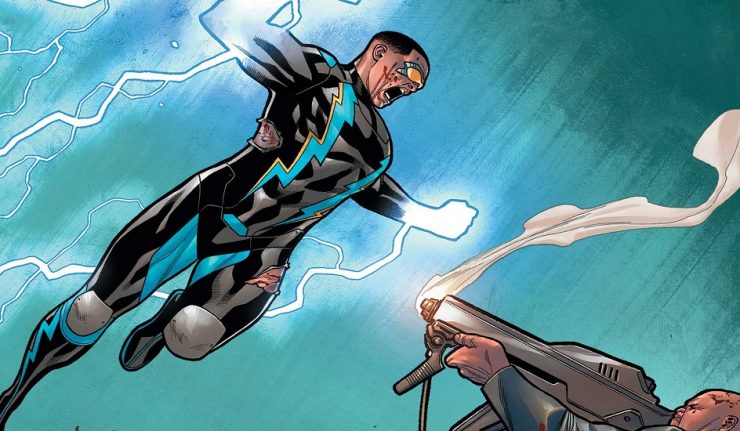 This is it: the climactic battle between Black Lightning and Tobias Whale for the future of Cleveland and the nation! Alien weapons! Flying killers! Police under fire! And the surprises keep coming right through the very last page of this story! Black Lightning’s back…but will he survive this ultimate showdown?

The issue opens with Jefferson taking on Tobias Whale. As soon as he looks defeated, he proves he has a few cards up his sleeve including Usagi, who uses his shape shifting abilities to beat Tobias, certainly something the reader never expected. As timely as this comic and the television show are, its relevance on the issue of gun violence has been a dominant theme on both, and this particular issue offers a solution where both the citizens and the police work together to take guns off the street.

As self-contained as this issue, it still finds a way to have the Justice Leaguers show up, as Flash and Cyborg arrive in Cleveland to help Black Lightning, something the TV how is not able to do. Lastly, the book ends on an open-ended note, one that will surprise the reader and effectively have them wondering what’s next. Hopefully a new series.

This book wraps up an excellent story that will have readers wondering why Isabella and Henry are not already working on an ongoing series.