As someone who loves comic book art, variant covers hold a special place in my heart.  They allow artists to showcase work that would otherwise never be seen, in styles that they may never, otherwise, be able to do.  So when I got the opportunity to review a brand new book all about DC variant covers, it was like a dream come true!

DC Comics Variant Covers: The Complete Visual History dives into the stellar world of these limited edition pieces of art.  This book is published by the amazing people over at Insight Editions, who are responsible for the release of some fantastic books like DC Comics Super-Villains: The Complete Visual History, The Dark Knight Manual, and The World According To Batman, and is a book that every lover of comic art should have in their collection.  But the real person you should be thanking for this book is the very talented Daniel Wallace.  He is the author or co-author of more than two dozen books, including The Joker, The Jedi Path, Man of Steel: Inside the Legendary World of Superman, DC Comics: Year by Year, The Marvel Encyclopedia, and the New York Times best-selling Star Wars: The New Essential Guide to Characters.  He brings his amazing writing skills to this book, making the written parts that much better.

From the front cover to the back, this book is jam-packed with gorgeous, eye-catching artwork, much of which is worthy of being framed and hung on a wall for all to see.  The first thing you see is a stunning piece of art on the cover by the great Neal Adams.  It showcases the two heroes that built DC Comics, Batman and Superman, but also manages to give us other widely used heroes like Wonder Woman and Cyborg, and some less used heroes like Batgirl and Green Lantern Jessica Cruz.  The inclusion of Cruz is something that really stood out to me, as she is the newest of the main Green Lanterns in the books, and is one that many, outside of those who actually read the GL books, don’t know about.  And seeing an equal number of men and women on the cover is great too.  Nice job, Neal!

But if I’m going to talk about covers, I can’t leave out the one on the actually book itself.  This is a design by Frank Cho, which is actually available as a variant cover for the book (yes, of course a book about variant covers has its own variant cover.  Why wouldn’t it?).  This is a stellar piece of linework, and was actually a surprise to me, as I had no idea it would be on the actual book.  I knew that Cho had done a variant cover (as seen below), but I didn’t know that a version of that cover would be “hidden” under an already beautiful cover jacket.  I was taken aback.  And if you think the outside of this book is great, just wait until you open it up. 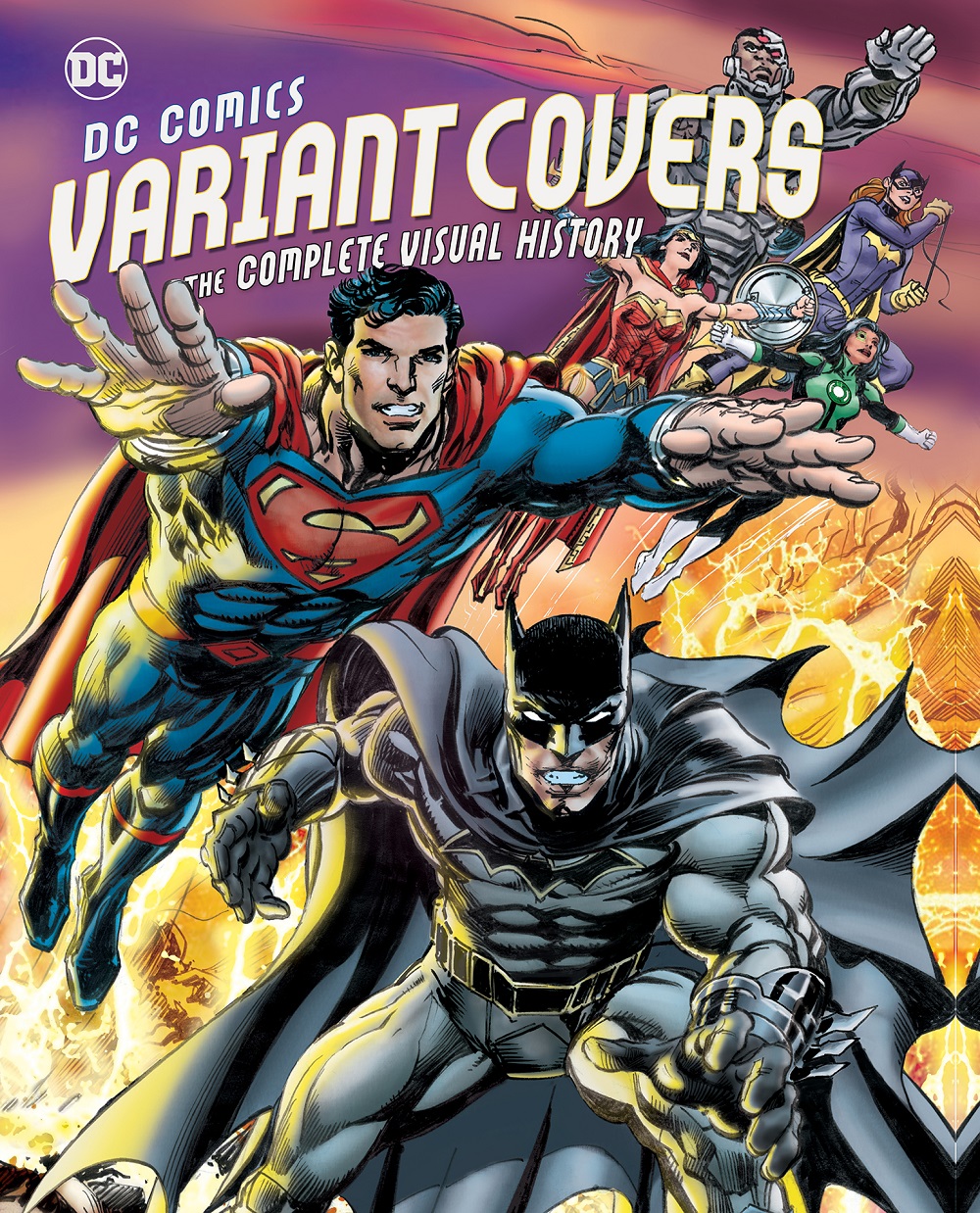 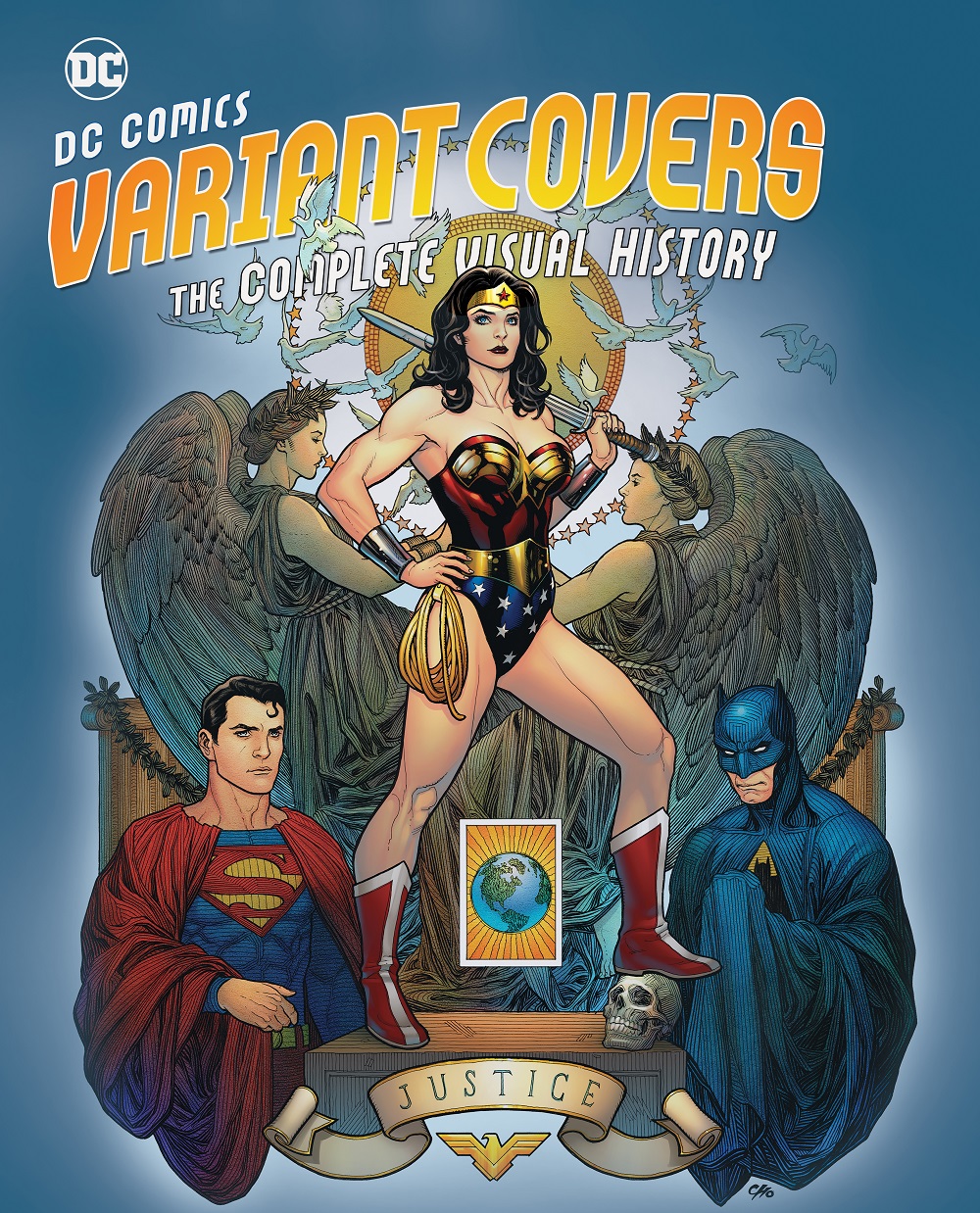 The first few pages of this book, which lead to the intro, showcase some amazing pieces of comic book art including a breathtaking cover from All-Star Batman #3 by Jock.  This image sets the stage for what’s about to come over the next 180+ pages and is one of many that I’d love to have hanging on my wall.  The intro and subsequent history section give the reader a nice look into the world of the variant cover and how they got started at DC.

Amongst the beautiful artwork are occasional blurbs from the artists involved.  They give some wonderfully interesting insight behind some of these gorgeous covers.  It was a treat to read these, but I honestly wish there had been more.  There were certain books (like Green Lantern (Vol. 4) #9, Justice League of America (Vol. 2) #1, and Batman (Vol. 2) #51, for example) that I was really disappointed that they didn’t get a blurb of their own.  I would love to have read a bit about the making of some of these other covers.

The first 35+ pages do a nice job showcasing some of the best variant covers over the last 30 years, however, I wish there was a bit more to the actual history portion.  I think making separate sections for some of the earliest variants in the late 80’s, covers from the 90’s, and then from the 2000’s, would have really added to the history section before diving into the themed variants from the last 5 years.  There were barely any covers from before the year 2000 and I was really hoping for more of that. 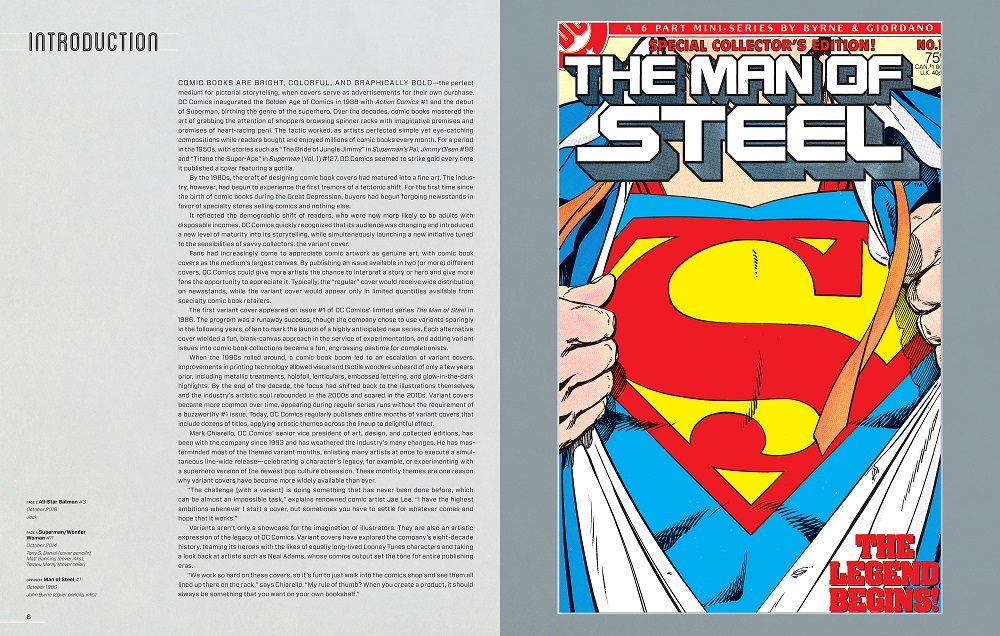 Now, don’t get me wrong, this book is a beautiful representation of DC Comics and their variant covers, but the title is a bit misleading, as it definitely doesn’t feel like a “complete” visual history.  If it was titled “DC Comics Variant Covers: A Visual History”, I would not have this complaint.  They even could’ve made it Volume 1, and released a new edition in 5 years with more info and covers.  It’s a beautiful book, and it’s kind of a shame that we probably won’t see future covers in a book like this, but anything is possible, and I’m glad we have this one.

The largest portion of this book is dedicated to the various themed variant months that DC took part in over the last 5 years.  These are some of my favorite covers, as it’s when I got super into variants.  I began collecting them during this time because they were made much more readily available, which is something they talk about in the book.  DC made it so the average person could enjoy these beautiful covers from these talented artists, and it’s something that has continued to keep me interested over the years.

It covers so many great themed months, from the 75th anniversaries of The Joker, The Flash, and Green Lantern, to Movie Poster month, and even Selfie month, but one of my favorites was Darwyn Cooke month from December of 2014.  Darwyn Cooke is one of my favorite comic book artists, and his crisp, clean linework has always made for some gorgeous art.  He’s one of the artists I wish I could’ve met, and it’s such a shame that he passed away before this book was made because I would have loved to have heard his insights behind some of these amazing covers. 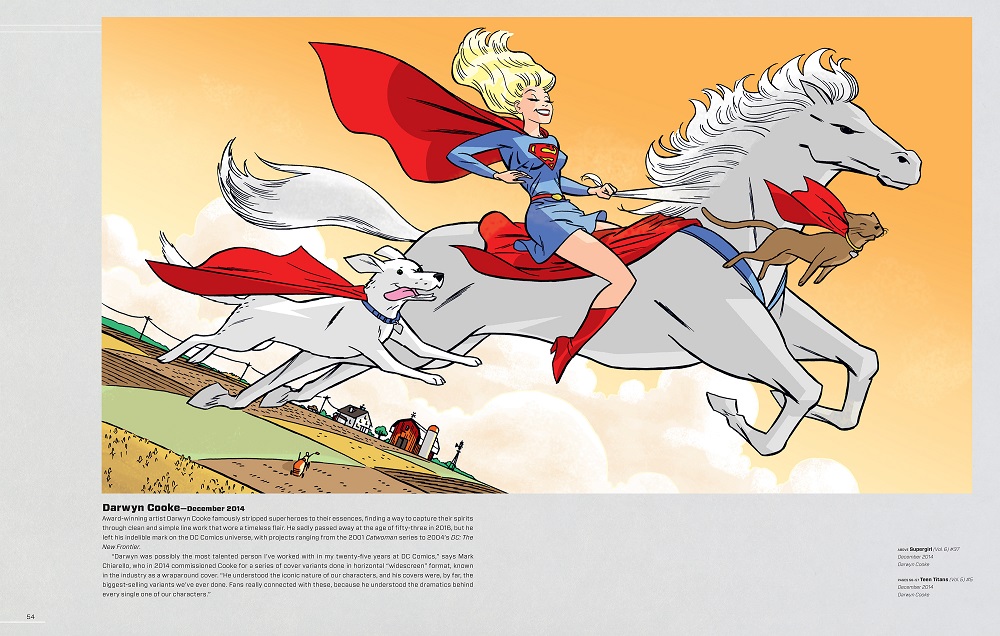 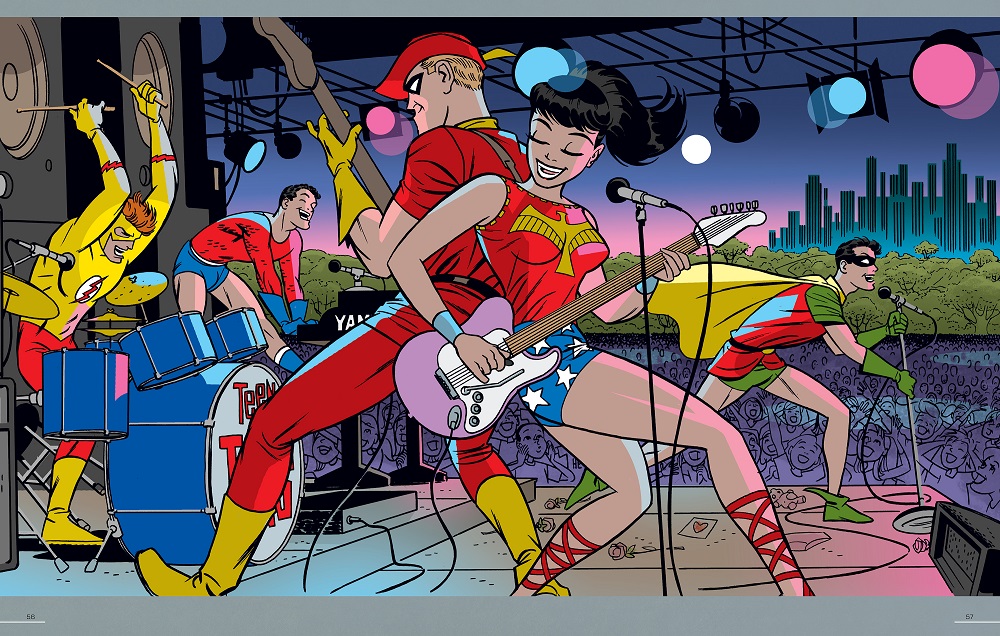 One of the main things I love about this book, besides the artwork itself, is the sheer size of it.  The book measures 11.5 in x 14.5 in, and gives several covers the full page treatment, which really allows the reader to see the detail and the beauty in some of these images.  The aforementioned Darwyn Cooke section even had some double full page spreads (as seen above), as these covers were all done horizontally.  And even though I love seeing so many of these fantastic covers from years past blown up to this size, I do wish that certain images were swapped out for others.  For instance, I would have loved to have seen the Green Lantern (Vol. 4) #9 image as a full page spread, as it is one of my absolute favorite variant covers.

All in all, this is an amazing book of not only art, but history as well.  If you love art, especially comic book art, then please do yourself a favor and pick this one up.  You will not regret it.

DC Comics Variant Covers: The Complete Visual History is currently available for pre-order at Amazon and Barnes & Noble and will hit shelves on April 24, 2018.

All images are courtesy of Insight Editions

Review: Supergirl 3×14 – “Schott Through the Heart”