The first thing you need to know is that the events of Doom Patrol take place before “Milk Wars.”  Danny the Street (or Ambulance) has crashed into Retconn.  The occupants of the ambulance are strewn about the room and unconscious.  Terry and Casey’s newborn baby is taken and sent off in a rocket ship.  This rocket looks nearly exactly like baby Kal-El’s rocket from Action Comics #1, June, 1938.  When the Doom Patrol comes around they see they are in the audience chamber of Haxxalon, the Star Archer.  He’s behind the most recent nefarious plot that’s been troubling the team.  He shares his story as an action figure that gained incredible popularity with lots of merchandising and licensing including a comic, but was brought down by a recall on the toy because of a harmful light bulb. 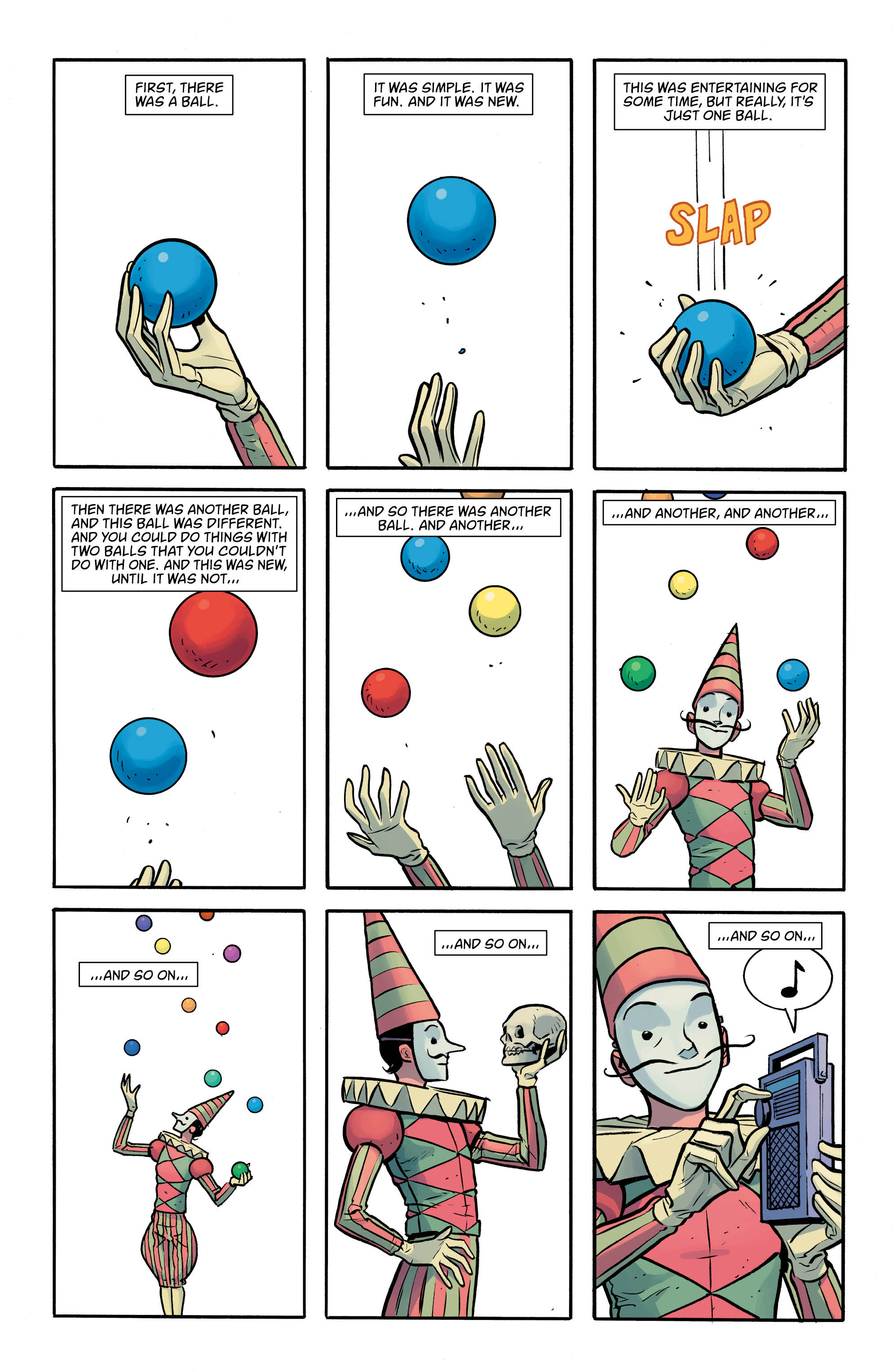 At this point he ceased to exist and found his way to Final Heaven and Retconn.  There, he discovered the God of Super-Heroes, a being made real from old comics by the powers-that-be at Retconn.  Haxxalon usurped the God of Super-Heroes position.  Unfortunately, he realizes he’s still a slave to the powers-that-be.  It is revealed that all the members of the Doom Patrol are from different realities, and that Cliff is a product of fan fiction.

Haxxalon has been waiting for his pending nuptials, and she’s finally appeared, forming out of formlessness on the floor.  As his bride takes shape, he announces that she is Starlene, played by Rita Farr- Elasti-Girl.  After the ceremony he shoots her, but her elasti-body throws the bullet back and kills Haxxalon.  And, they are suddenly all under attack.  Mr. Nobody has lost most of his Brotherhood of Nada and is launching a new assault.  Turns out Terry Noone is Nobody’s daughter.  Nobody is trying to entertain the Television Addicted Gods.

In the aftermath of the assault, Sam, Val and Lucius arrive.  The Doom Patrol sets out to tie-up loose ends.  They don’t seem to realize that Rita has been led off by Retconn’s powers-that-be, but they do board Danny to go off and try and find Casey and Terry’s baby.  Cue “Milk Wars…” 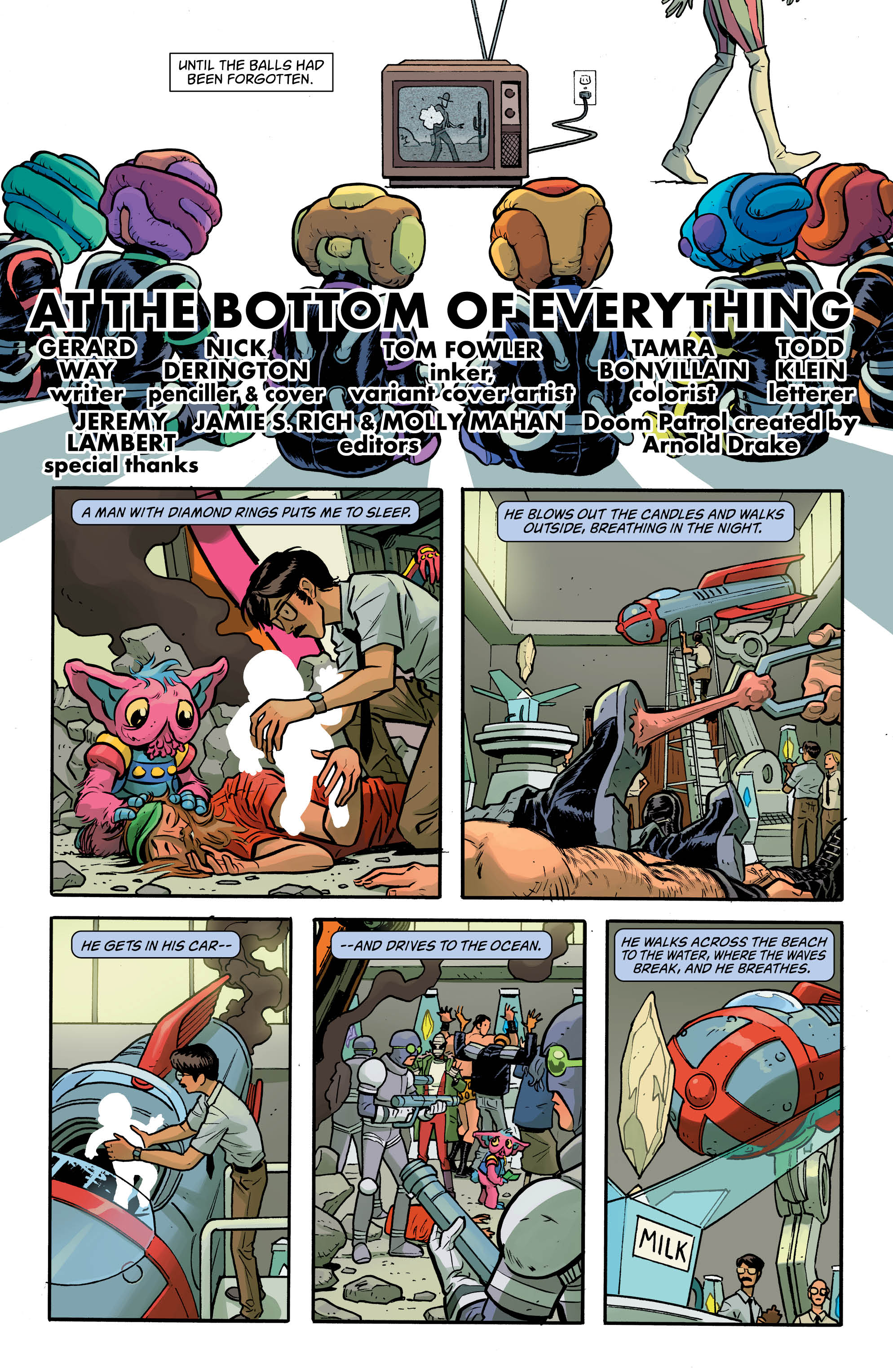 There’s a lot going on in Derington’s art.  It pays to go back and  study the panels carefully.  Rita Farr WAS actually stuck to the bottom of someone’s shoe on page 1.  We’ve come to care for these characters and while launching into “Milk Wars,” this issue closes a lot of the gaps that have been teased since issue #1.  It’s clear now that Mr. Nobody has been after the Doom Patrol with long-term planning.

The off-beat nature of this title is probably the biggest draw.  It’s almost it’s own genre.

Look out for the amusing and meta-textual commentary on comic book writers as Cliff’s fan fiction is discussed in relation to the “mash-up” quality of this iteration of the Doom Patrol. 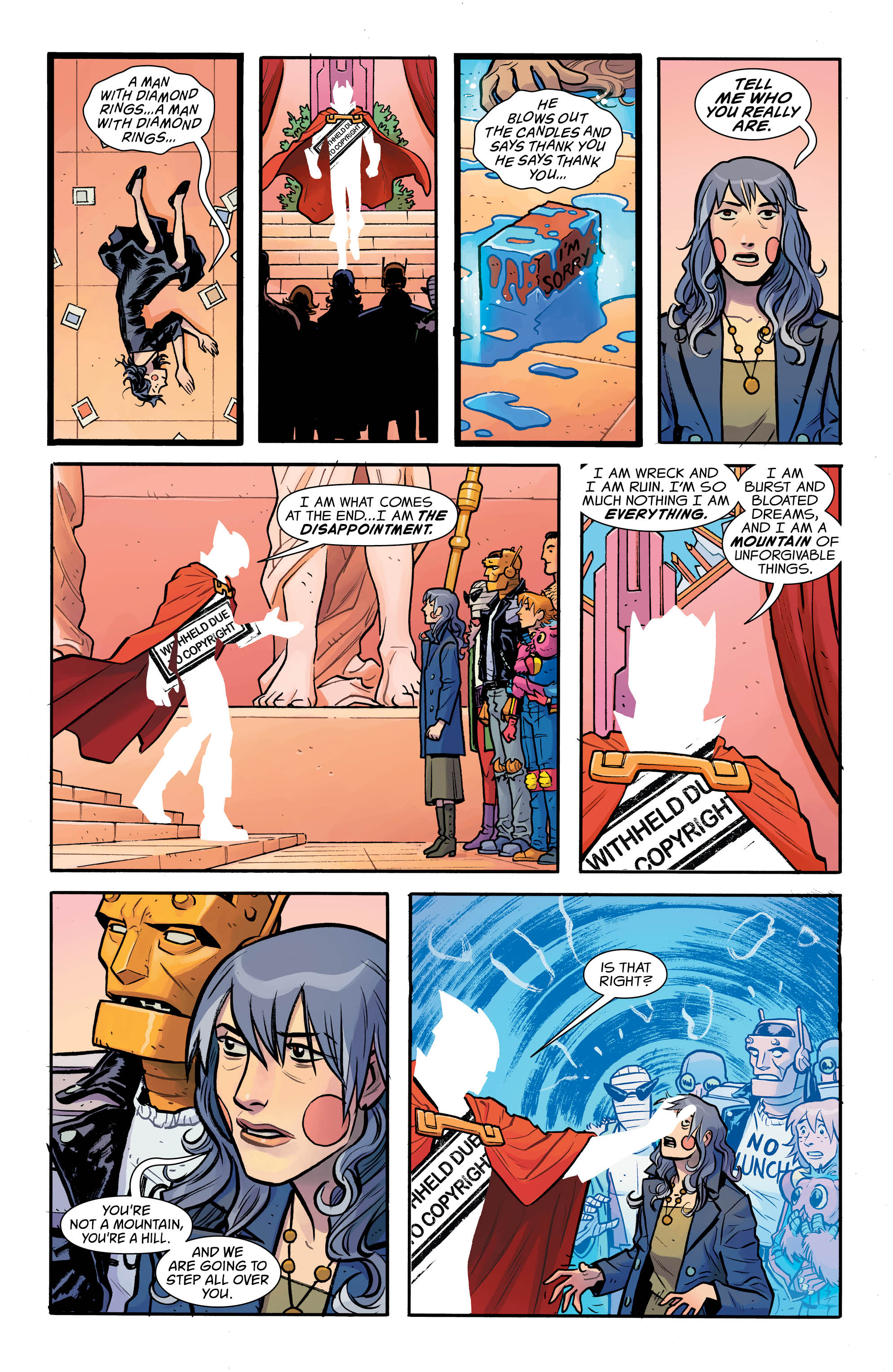 The publishing delays for Doom Patrol are the single biggest drawback.  At this point you need to read the whole story arc together.  It’s just been too long between issues for it to make sense.  It’s a real shame because the story telling and content is so unique.

The conclusion to the Nada arc is effective and imaginative.  It’s only held back by the delay between issues.  Imagine if things were published in proper order and “Milk Wars” came immediately after instead of between #10 and #11.