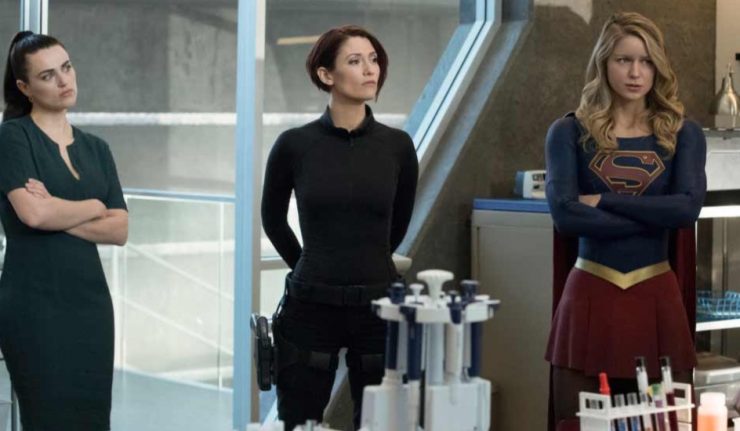 The Worldkillers create an eclipse while Team Supergirl attempt to rescue their human alter egos.

James continues to be the MVP of the most recent episodes. Every scene with him is really strong. He’s put in a really tough situation. He feels a loyalty to Kara and wants to help her as best he can but he cares about Lena. He wants to believe the best in her. I’m also coming around on the relationship between James and Lena. I love how communicative they are with each other. There’s a sense of respect between the two that’s rare for relationships on this network.

The episode takes a really interesting turn by the end in regards to the Worldkillers. The end of the episode was a genuine surprise and that was a lot of fun.

Lena is not handled well in this episode. The episode refuses to acknowledge that what Lena did is wrong. Lena acts like because Supergirl and Alex keep secrets that it’s okay for her to do it. That’s kindergarten stuff; two wrongs don’t make a right. It is wrong that Supergirl doesn’t Lena who she is; there really is no reason for it. But Alex is a different story; she isn’t choosing to keep a secret. She is required to by her job. Sam begged Lena to ask Supergirl and Alex for help and Lena said no. I was hoping the show would deal with how wrong that was.

I love Lena and recognize that she is brilliant but she cannot pilot a ship from the 31st century. She just sits down and does it; that was utterly ridiculous even for this show.

The Mon-El subplot is painful. It mostly consists of weird looks from Mon-El and Imra while Kara acts like an adult. I understand that this a weird situation for Mon-El but every scene with him was very tedious.

The episode is good but it could have been stronger. My big problem is that the conflict between Kara and Lena doesn’t really work. The episode blames Supergirl for Lena’s mistakes and that was frustrating for me to watch. But the conflict with the Worldkillers is strong especially the ending. And I love James’ subplot. These elements help make the episode enjoyable despite my issues.