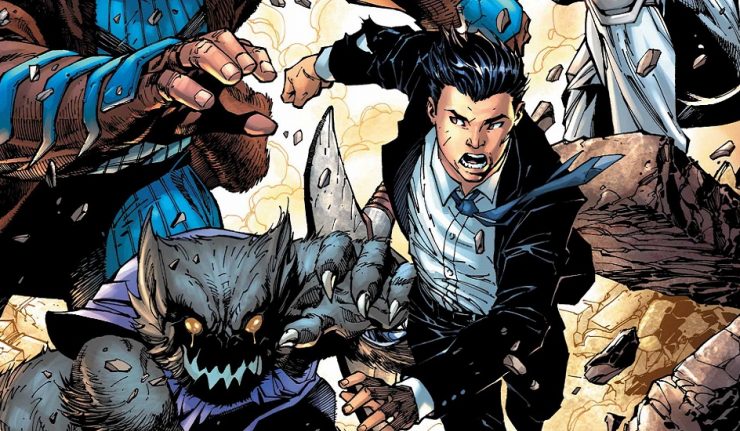 Caden Park ran out of the horrors of a subway nightmare and onto the streets of a deserted New York City. Why does the cab driver who picks him up call himself the Immortal Man and disappear? Why is there a PI sent by his parents rescuing him? The questions keep coming while a patient Infinite Woman prepares a tactical strike to capture Caden and eliminate the remaining Immortal Men. Is this really “The End of Forever?”

We start to meet the Immortal Men through the eyes of their pursuer, the Infinite Woman who rates their value as targets. First positive is that we get to learn a little about Reload. He reminds me of Moon Knight with a Christopher Nolan-era Bane breathing mask. We learn his family mined coal and he wouldn’t, and that he later made a deal for immortality with a man in a Cambodian jungle. Good sensory details describe the coal dust coating his throat when he was a boy.

It starts to feel like a bit of an information dump, and thankfully James Tynion IV pumps the brakes by shifting the attention to following Caden’s trail.

Timber is from the 1850s and can change her size and density. Ghost Fist is from the 20s and can draw energy and use it to transport the group over small distances. Reload can subtract time from an object in his direct line of influence. Which means he can fire the same bullet over and over again.

We also learn that they are descendants of Immortals from within the last 200 years, and Infinite Woman wants to know why the Immortal Man chose these four, There is also a series of references that members of the House of Conquest and Vandal Savage have brothers and sisters who work for the Immortal Man’s House of Action. So, essentially it’s nothing but an old family thing.

An interesting twist occurs when Caden Park, the dreamer from Issue 1 runs out of the subway nightmare we last saw him entering and out onto New York City streets with very few people. And then we meet the Immortal Man driving a cab. And then he’s gone and a P.I. hired by the parents rescues him by smashing into the cab. He’s former A.R.G.U.S. and he can’t reach any emergency numbers. Monsters attack and Timber arrives for the rescue.

We meet The Kill, who has just murdered Caden’s parents. We then see that he created the Bloodless by re-purposing dead bodies. This starts positive, but see the negatives for more.

There is a nice use of light when the cabbie tilts the rear view mirror and it reflects on his face before he becomes the Immortal Man, Caden can glimpse information from people’s minds and they are called Mind Swipes. I like this better than mind reading and it hints at his ability to get snippets and not the whole picture which could be a great story device later.

I like the idea that a bomb attack by the Infinite Woman in broad daylight could draw the attention of the Justice League, and that this is something Ghost Fist wants to avoid. Why do they need to fight in secret? This is a question with great potential.

On page 5 Reload refers to the spheres attacking them as hate spheres. I almost put down the comic. The concept felt bland and the fact that I have seen the design since before Conner Kent’s Apokolips play toy on Young Justice.

The Kill creating The Bloodless is a cool scene and reveal, but then the line about how their souls are gone and he is just using their bodies takes the sting out of the venom. The Kill releases them on Caden so that their first kill will be their own son, but without a tortured soul behind the actions, they feel mindless and ineffectual.

Which leads us to the death of Caden’s parents. Caden leaves his PI to find his parents murdered by The Kill on the top floor of their building. It seemed too fast to be real. And then not just too fast, it felt like there was no impact. I thought even the deaths of Uncle Owen and Aunt Beru from Star Wars: A New Hope felt more powerful than this moment. Probably not fair, but true.

Learning about the House of Action through Infinite Woman was a nice storytelling device, though it was not enough to overcome the limits that were intentionally placed on the development of characters like the Immortal Man. I need more reasons to care about Caden, other than to feel he is the vehicle that gets me to the Immortal Man. The series can get there and I hope it will.