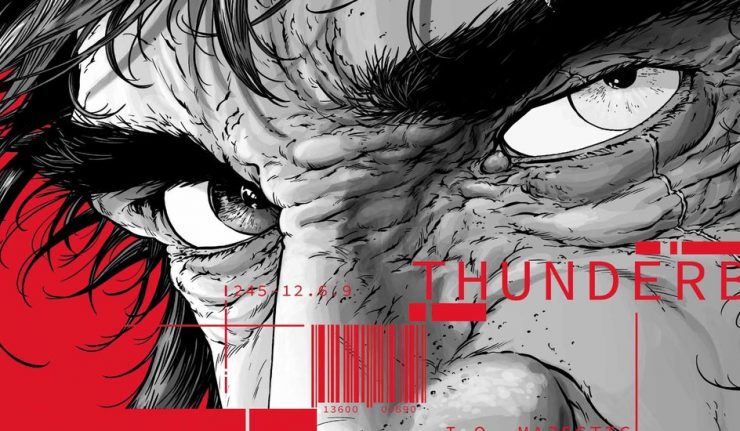 Former Director John Lynch tracks down former Colonel Marc Slayton. With how this series is progressing just about any other sort of synopsis would fall into spoiler territory. So the most spoiler free summary possible would be to say that Warren Ellis and Jon Davis-Hunt deliver another installment to the long running WildStorm reboot.

It feels like so long since the last issue of Wild Storm so it’s a real joy to get to see some Jon Davis-Hunt artwork again. Everything is so clean and defined that even the most gruesome action sequences are beautiful. It’s hard to forget just how good the artwork is, but it is certainly noticeable just how pristine everything is. This is only made more apparent by the fact that the Michael Cray series is released much more often than Wild Storm at this stage. Artwork in that series isn’t always great so to go back to this book and Davis-Hunt’s art, everything ‘pops’ from the page. Even if the story of this book isn’t to your tastes the artwork is hard to dislike.

Along with a return to the series is a return to Ellis’s pacing. As is often the case with the Wild Storm, content is somewhat minimal but Ellis does a remarkable job at telling what little story there is in an engaging and entertaining way. This month Ellis uses each character featured effectively to keep the reader interested. The tension is almost always rising throughout the issue which is aided by Davis-Hunt’s panel layout.

The final positive is the format of the series, which is becoming much more apparent as the series progresses. Unlike most comic books, The Wild Storm feels much more like a TV show. This issue feels like the season premier to #12’s season finale. With the cover suggesting this series will run for 24 issues that would make this the midway point of the series, or the continuation after the mid-season break if you will. It’s different and might not be for everyone but it’s hard to fault Warren Ellis for trying something new like this.

With that said, this series is so noticeably written for the trades that it’s almost unbearable at times. The plot moves forward at such an alarmingly slow pace that had it not been written by Ellis it would likely have lost many readers. The previous issues all felt like they were building to something, with #12 being the blow off, but that means that #13 needs to start building again and there’s just not enough here to convince people to keep going. At this stage only WildStorm fans have any motivation to continue, unless fans are reading the trades which would be much easier reads.

Another peculiar problem is the characters. The series started with such a preoccupation of introducing these characters to new readers and yet now it’s as if Ellis has given up. If you haven’t read much original WildStorm then this series is going to be tough to follow. This issue specifically introduces a couple of characters that one would assume are big names in the WildStorm imprint, but they’re given minimal characterization leaving new readers puzzled. Now it’s likely they’ll be fleshed out later, but again with the speed this series progresses at, there is no motivation for readers to keep going at this stage. With a trade one can just read through four or five issues in a short amount of time. On top of this The Wild Storm has a somewhat spotty release schedule, meaning it could be more than a month before readers have a chance to continue this story, which is just too long for such a confusing story with so many characters.

The long running Wild Storm series returns with a decent if slow issue by Ellis and Davis-Hunt. The series needs these creators and would falter with anyone else. Ellis’s pacing and Davis-Hunt’s mesmerizing artwork save this lackluster issue.