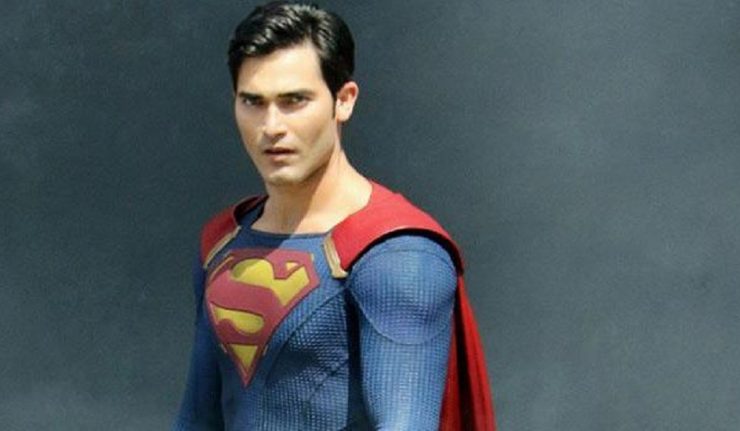 Tyler Hoechlin is an American actor who first gained prominence in the film Road to Perdition. He then went on to gain a huge fan following playing Derek Hale on MTV’s Teen Wolf before taking on the iconic role of Superman/Clark Kent on The CW’s Supergirl.

Tyler was one of the many great stars appearing at the Heroes And Villains Fan Fest in London, where he had a lot to say about playing The Man Of Steel. Here are some highlights from this year’s Supergirl panel.

Moderator: Welcome. How’re you all doing? What’s it been like this weekend meeting all the fantastic Supergirl fans?

Tyler Hoechlin: This is my first Heroes & Villains, thank you guys for giving us so much love this weekend, and hopefully you guys had a good time!

Mod: Tyler, you came in on season 2. What has it meant to you to have Supergirl be part of your life?

TH: It can be difficult joining a show like that when it isn’t from day one. It was nice to show up on set, seeing people like Mehcad there – who I’d met at ComiCon, before we even started shooting. I felt very welcomed into this family. This was nice, given that the response wasn’t completely positive, when I got it! Their confidence and everything, it was exciting to go up there and take on the challenge to play that character, and it’s been a lot of fun.

I enjoy every day of working on it, and ever since everyone has seen it, I feel that they enjoyed it, and it’s nice to be a part of that world.

Mod: It’s gotta be amazing putting on that red and blue suit?

TH: Yeah! It’s weird when you walk on set, and then you realize that people are calling you Superman, because they have to believe it, you’re shooting. So it’s a really strange, surreal feeling, for sure. But, the most humbling thing you’ll ever do is – in the middle of a scene – say the line to the bad guy like “We’ll be back”, and then jump in the air, and immediately land on the ground, while they go “OK, freeze! Now, Tyler…. exit”, and you just trot off camera. It’s the most humbling experience ever. You just feel so stupid, dragging your cape on the ground, hearing it go across concrete, and you’re like, “I wish I could just actually fly away”, it would feel so cool, but now I just feel really lame. [Laughter from the crowd]

Fan: What was it like changing your character from Derek [Hale, in TEEN WOLF] to being Superman?

TH: I got to smile, for like the first time in five years. [huge cheers, and applause] That was nice. I had to shave, though… that was the downside, I’m not gonna lie. But it was fun, it was definitely a completely different character. Derek’s one who’s fighting, so he could have just a piece of hope, where Superman is completely full of that… so, it was a completely different character, but the experience was equally gratifying.

Both sets were a lot of fun, and the people were great. Most of my great friendships are from working on set.

Fan: What’s it like working with Melissa and Chris [Wood, who plays Mon-El]?

TH: I have to say about Melissa, I don’t think they could have got a better Supergirl. She’s got that energy all the time, so for a set where you work really long days, you need someone that has to be there every day, and be that energy in order for a show like that to work. She’s really a joy to work with.

Chris is great. The first time I was there, Mon-El was in a coma, so I didn’t get to speak with him as much. When I got to come back in the finale, we got to know each other, and got to work together a couple of days on-set, so that was really nice.

The whole cast was a treat to work with, I don’t have a bad thing to say about anybody.

Fan: How would you feel about Lois Lane coming on to Supergirl?

TH: Shelly Hennig? Cool! Yeah, that would be really fun. Let’s see if we can make it happen.

Fan: What’s a fun memory of working with Melissa?

TH: When you see it, there’s laser beams coming out of our eyes, but the scene where [she] and I had to fight… how hard we both had to try not to laugh! While we circled each other, while they said “Stare harder!” I don’t think I’ve ever tried so hard not to break. They would count down to three, and then we’d both go [puts on look of deep concentration and stares really hard, to rounds of laughter from everyone around].

And we’d keep our eyes as wide as possible, while we circled around each other for about thirty seconds. After every single take we both fell about laughing. That was my favorite moment from even being on that set. It was the best version of a staring contest you could ever have.

We were getting to do a scene where you had just drop into frame. We were both hooked up to a wire to take us up to the ceiling, and they told us that they were gonna test it, but Melissa didn’t hear them. So, she and I are in mid-conversation, and I know that they’re about to take us up, and she had no clue. In the middle of a sentence they just lift us up really fast, and she was all “Whoooooaaaahhhhh!” [Huge laughs] It was the greatest grandma scream [more laughter] that went throughout the whole warehouse. I never knew that that was how she expresses being freaked out. I learned it that day, and I laughed for like a good twenty minutes. It was so funny.

Mod: [To the fans] Who would love to see Superman back on Supergirl? [A roar of approval from everyone in attendance].

TH: I’d say there’s about 15 people you’d have to ask if that were possible first, but I would love to come back. It was a really fun set, so any time would be a good time. Hopefully. You’ll know when I know.

Fan: What advice would you give to aspiring actors?

TH: I’d say don’t be afraid to commit to your ideas. A lot of the time when you start auditioning for a lot of jobs, you can fall into a place where you feel pressured to think about what they want to see, as opposed to what you just feel is your instinct. I find that if you commit to your idea of something it’s a lot easier for someone to say “No”, and for you to accept that and move on. At least then it was your idea. It would really bother you if you tried to do something that you think they want, and they still say no. Then you walk away thinking “I never even tried what I actually wanted to do. I just tried to be a version of what I thought they wanted.” So then you never really gave yourself a chance.

Find what speaks to you and then commit to that.

Fan: How do you think Clark would feel seeing his best friend dating the sister of his arch-enemy? [regarding James Olsen’s on-screen romance with Lena Luthor, played by Katie McGrath].

TH: It’s complicated. [laughter] I think he’d trust Jimmy enough, give Jimmy some credit. In the worst case scenario I could get rid of her, but it probably won’t have to come to that. [more laughter]

Fan: What one word would you use to describe your experience working on Supergirl?

Fan: Since Supergirl is set in a world where your Superman has had other adventures off-screen, how much did you have to discuss about how much Superman has done already?

TH: I think going into it, the amount of experience Superman had was a conversation that I had had with Greg [Berlanti, executive producer and creator of the Arrowverse, AKA the Berlantiverse] and most of the writers, so we didn’t have to do too much explaining of it. It was like, we know what this is.

TH: It’s when we’re on set, and there’s a bunch of little kids hanging around, and you get to go over and say hi, take a picture with them, and for a second they think they’re actually meeting Superman. That was actually really cool.

Mod: If you could appear in any of the other DC shows, which one would you like to appear in, outside of Supergirl?

TH: I’d say The Flash, because I’d want to do the race. [Huge roar of approval]

Fan: If your character fell ill, which Disney character would you choose to take your place?

TH: [After rounds of laughter and looks of confusion from the panel and the crowd] Peter Pan [loud cheers].

Fan: If Teen Wolf hadn’t ended, and if you could choose to star there or continue on Supergirl which would you choose? Which do you like more?

TH: Oh, c’mon! [Cheers, and jeers] This is not a preference over which I like; I did a lot of episodes of Teen Wolf, so I feel like that chapter of my life has had a close to it. Supergirl is still something that I’ve only done a few times, so purely for the reason that I haven’t experienced as much on that set, or told enough of that story yet, I’d probably try to do that. [The crowd approves loudly]

So, there we have it. Tyler came across as a really fun guy. He was really open, and honest with his answers, some of which were fascinating. I will admit to being unsure when I first heard that he’d been cast as Superman, but after seeing his take on Clark Kent, and The Man Of Steel, I’d definitely love to see him return.

What do you all think? Please let us know in the comments.

Also, please check out our report from the Heroes & Villains Gotham panel over on Dark Knight News, as well as our exclusive interviews with Arrow‘s Kirk Acevedo, Legends‘ Franz Drameh, Danielle Panabaker from The Flash, and Drew Powell, Cory Michael Smith, and Robin Lord Taylor from Gotham.