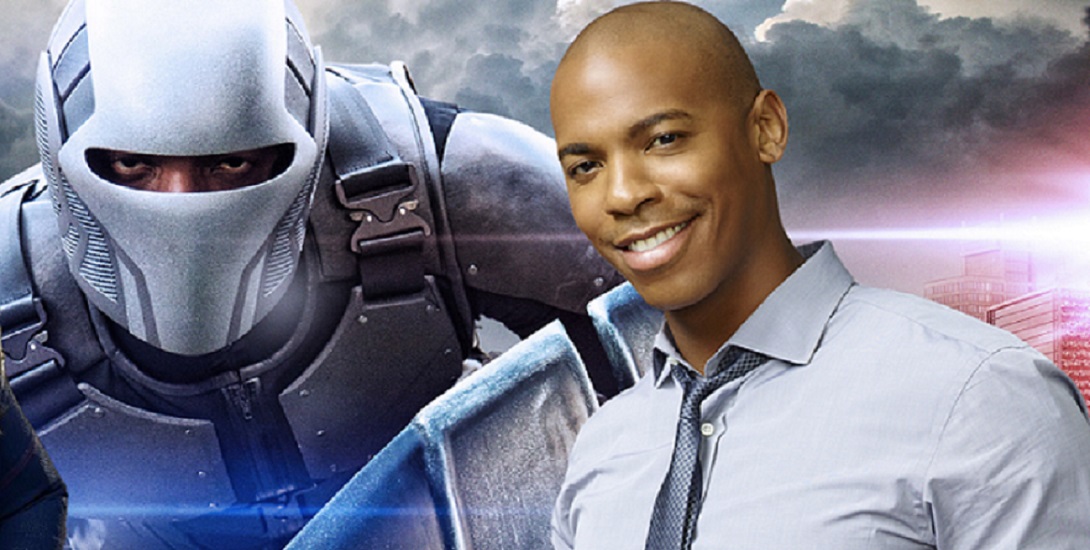 So, there I stood… a little guy from London in a huge arena, soon to be filled with thousands of fans and dozens of TV and movie stars. On top of all that, add on the pressure of this being my first ever live event as a journalist representing two quality websites that are depending on me to deliver. I had to take my nephew with me for moral support. I was a nervous wreck! The celebrities are mostly late, except for a couple. The first one I see is Mr. Mehcad Brooks… this dude is big!

I panic a little, I’m nervous and I’m starstruck. My nephew is a huge fan of Supergirl and my wife and I have enjoyed Mr. Brooks’ work since his run in Desperate Housewives, back in the day. He’s just arrived, but a queue is fast forming. It takes me four attempts, but watching him with the fans makes me join the line.

Mehcad’s smile is as big as he is. He greets the fans and hugs them. Now these aren’t fake little artist hugs… oh, no! These are genuine pick you up, grab you like a long lost relative bear hugs. He is attentive with the fans, he listens, he laughs, he talks and he disarms them with genuine warmth and consideration. With every step that I get closer the more my anxieties fall away, and the more I relax into doing the job that I’m there to do. I take a deep breath, swallow the nerves and dive in.

What’s In A Name?

DCN: Did working on Supergirl spark an interest in the comics, or were you always a fan?

MB: I loved comics growing up, but for me it was always more the cartoons and the animated shows. I liked Archie Comics.

DCN: (With tongue firmly in cheek) I heard somewhere that they have a show now, too… I think.

MB: (Laughing) Yeah, I heard that too.

DCN: Are there any characters from the DC Comics, or the cartoons, that you’d like to see in Supergirl?

MB: Actually, coming up next season… (He pauses, looks down and shakes his head, smiling all the while) Oh, man. I nearly let the cat out of the bag!

DCN: Ah, OK. I guess you’re sworn to secrecy. That’s cool. So, are there any actors you’d like to work with?

MB: Oh, so many! (Excited) Coming up we’re gonna have… (He stops once more) Oh, man I did it again! You are GOOD! You nearly got me to let the cat out of the bag twice!

DCN: So, I’m really striking out here. I understand, though. I love surprises and I hate spoilers. So, next question.

MB: Shoot. I’ll answer this one.

MB: (He looks me dead in the eye. Slowly he begins to smile) Now, that’s a question! Wow. That’s a question that deserves an answer, and a good answer. You have really caught me today. My mom’s a journalist, a good one. You’re in her league!

DCN: I’ll take that as a huge compliment. We only have one mom, after all!

MB: Listen. I’m impressed, but I realise that I haven’t really answered any of your questions, and that last one… That’s a great question and I want to answer it… but properly. I want to sleep on it, consider it, think about it and give you the answer that question deserves. Are you still working this event tomorrow?

DCN: Yes. I’m here with my nephew today, but I’ll be bringing my son tomorrow.

MB: You come and see me. I promise you, I’ll have an answer for you tomorrow.

DCN: I’m gonna hold you to that.

So, off we trundled. We had an incredible day. We attended panels, we took pictures of awesome cosplays, we met more stars, and I’d lost my nerves. But, what if I didn’t get a chance to go back? What if he couldn’t finish the interview? I definitely would never get it published as it stood! No, I had faith. I felt that Mehcad would prove true to his word.

The next morning the line to see him was huge! Word had got around about his friendliness and approachability, I guess. We saw him, over the course of two whole days, treating every single fan with the same warmth, the same smile and the same attitude in every single instance. Young fans, old fans, huge fans, tiny fans. Fans on crutches, fans in wheelchairs. They all got a hug and they all got his charming smile and unwavering attention.

Once or twice we’d catch his eye and he’d nod our way, smile and give us a thumbs up.

At the end of day two, as the event was winding down and the queues were emptying, my son and I made our way back to Mehcad’s table. He had a few fans still in the queue, and he attended them all in his usual manner. We joined the line for press and waited our turn.

His crew and event staff recognised me and Mehcad asked us to come and sit behind his table, not to stand in line. Some of the other journos and reporters who were ahead of us weren’t very pleased, but it was explained that we were expected, and that the meeting had been pre-arranged.

Finally, Mehcad came over. I introduced him to my son and we concluded the interview that had begun over 30 hours earlier.

That Is The Question

DCN: ‘Tis I, your nemesis! The Bad Penny. I’m here with my son today.

MB: (Giving my son another one of his trademark bear hugs) Hey, great to meet you. Your dad’s awesome.

DCN: Thanks so much for seeing us again, it’s greatly appreciated.

MB: Hey, I’m a man of my word. About yesterday, listen… that didn’t go right. I told you my mom was a journalist, right?

MB: Well, she always said to be wary of journalists. Some are genuine, but others are just out for what they can get. She always said to me that with some you shouldn’t answer their questions, but say what you want them to hear.

DCN: That’s sound advice. I’ve worked with both kinds of individuals, but – I have to say – I’m probably here more as a fan, than as a journalist.

I had to take a little bit of time to think about it. You said what is the one question that I never got asked, that I wish someone would ask me. And I started thinking about it, and I thought I knew the answer and… man, I started talking to one of the fans and I realized I was wrong.

The answer really should be this.

How can the cause of human equity intersect?

Anything that you can think of, that causes inequality is bullying.

Be Who You Are, Not Who The World Wants You To Be

MB: I think that we have to get to a point in our society where we can ask these types of questions… where we can understand each other in such a way where we don’t get upset about it, or feel a certain way about it and we can actually openly, and honestly talk about things.

I guess that most of us can understand that concept of bullying. I think that it’s the most important thing that we can talk about. I wish that more people would ask me that.

I think that the issue we’re talking about is judgment versus prejudgment. I don’t mind being judged… observe me, observe my behavior. Go ahead and judge me. You might be a good judge, or you might be a bad judge, but at least you observed me first. I can handle that.

If you’re gonna judge me without knowing a thing about me? You know where you can stick your judgment.

DCN: Thank you. I know many, many fans are going to read these words and find comfort in them. To know that the people they look up to have suffered bullying too, will hopefully provide some inspiration.

That’s it. Was that worth waiting a day and a half for? I think so. I and many others have experienced being bullied. To see someone regarded as a star say that he has experienced it, and still been successful in spite of it is a strong and positive message.

So, there I was… a little guy from London in a huge arena, slowly emptying out. What once was filled with thousands of fans and dozens of TV and movie stars was once again becoming just an empty hall. Thankfully I wasn’t alone, I had my son with me for moral support. I was a happy man! The celebrities were mostly gone, except for a couple. The last one I saw was Mr. Mehcad Brooks… and as I said before, this dude is big!

But his heart is bigger still.